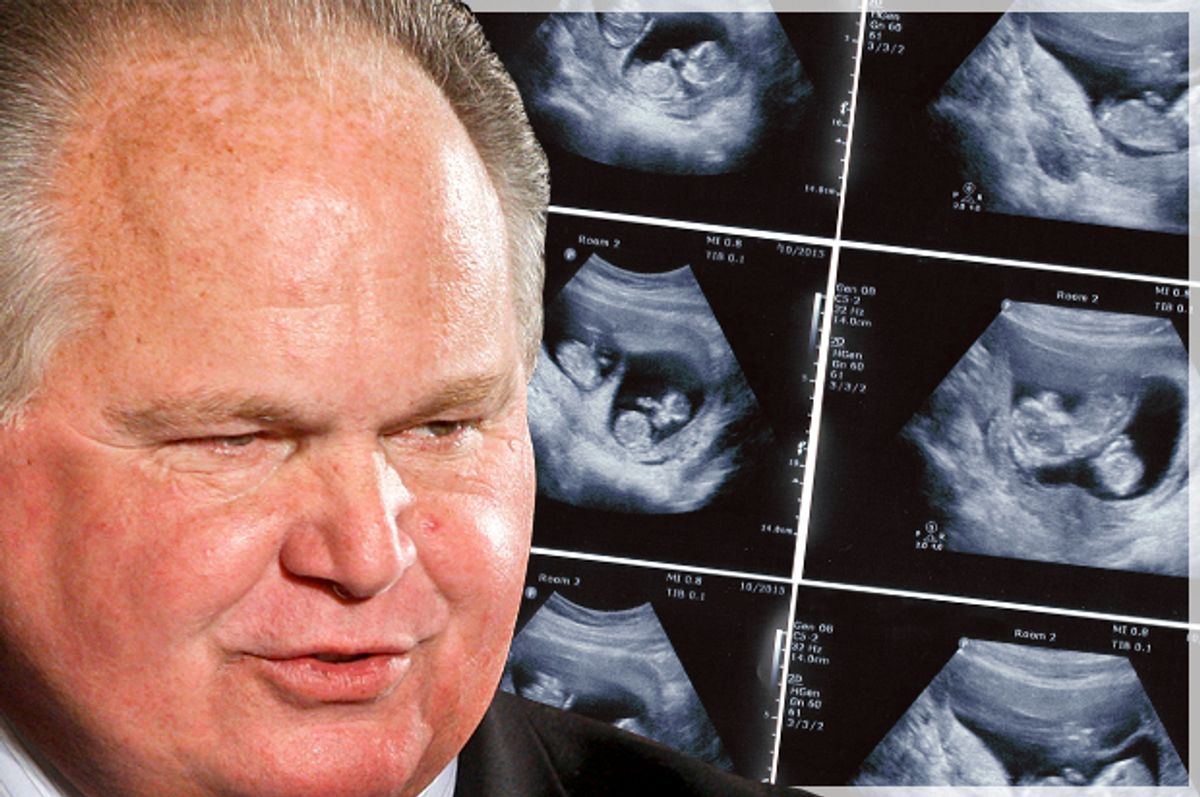 In 2012, after Georgetown law student Sandra Fluke was denied an opportunity to testify in front of congressional committee in favor of insurance coverage for contraception, Rush Limbaugh had a multi-day tear of demonizing women for having sex.

Out of many memorable statements — calling Fluke a "slut" and a "prostitute" and suggesting that the only legitimate contraception is "aspirin to put between their knees" — one of the standout moves was to demand that women give him pornography if they wanted their own insurance plans to cover contraception.

"So Miss Fluke, and the rest of you Feminazis, here's the deal. If we are going to pay for your contraceptives, and thus pay for you to have sex," Limbaugh railed. "We want something for it. We want you to post the videos online so we can all watch."

Of course, his rant was based on a false premise. Fluke was not asking him or anyone else to pay for her contraception. She was asking that the student insurance plan, which students have to pay for themselves and often have to borrow to afford, cover medications that students need. Still, the main point of Limbaugh's rant was clear: If women are going to dare have sex, then nosy conservatives want pictures.

Well, North Carolina is edging closer to making the dream of a camera up every vagina come true. The state has passed a law requiring doctors who perform abortions after 16 weeks to hand over ultrasounds to state officials. The ostensible reason for this is to make sure doctors aren't trying to cheat the state's ban on abortions after 20 weeks, but pro-choicers in the state argue that it's yet another effort by anti-choicers to use shame and intimidation tactics to punish women for seeking abortion.

There is no evidence that doctors in the state are, in fact, trying to wiggle around the time limits on abortion in the state. There is, however, ample evidence that anti-choicers are deeply interested in violating women's privacy. There's a reason that anti-choice activists love to gather around abortion clinics, yelling personalized abuse at the women going in the clinics and intimidating them by taking pictures. They may claim it's "sidewalk counseling," but it's quite obviously an attempt to strip women of the basic right to medical privacy.

Protesters have, in the past, had to be satisfied with taking pictures of women's faces and license plates, but now, with the help of the state of North Carolina, the invasive camera is going right up your hoo-ha. The law does state that the pictures are not to be considered public record and that the doctor is allowed to remove the patient's identifying information from it, but all that will be cold comfort to a woman who is being told that the price she must pay in order to get an abortion is turning over such intimate pictures to government officials to pore over in hopes of creating some pretext to shut the doctor down.

What happens if one of these officials decides there are questions about how big your fetus is? Will you be called in to testify about your last menstrual date for some state board? Will you be asked to prove it? Assurances that they're not trying to invade your privacy aren't very reassuring when the people who passed this law are the living embodiment of nosy neighbors who need to learn to mind their own business.