Ugh, Ricky Gervais is still the worst: The Golden Globes will only grow more tiresome if he hosts again 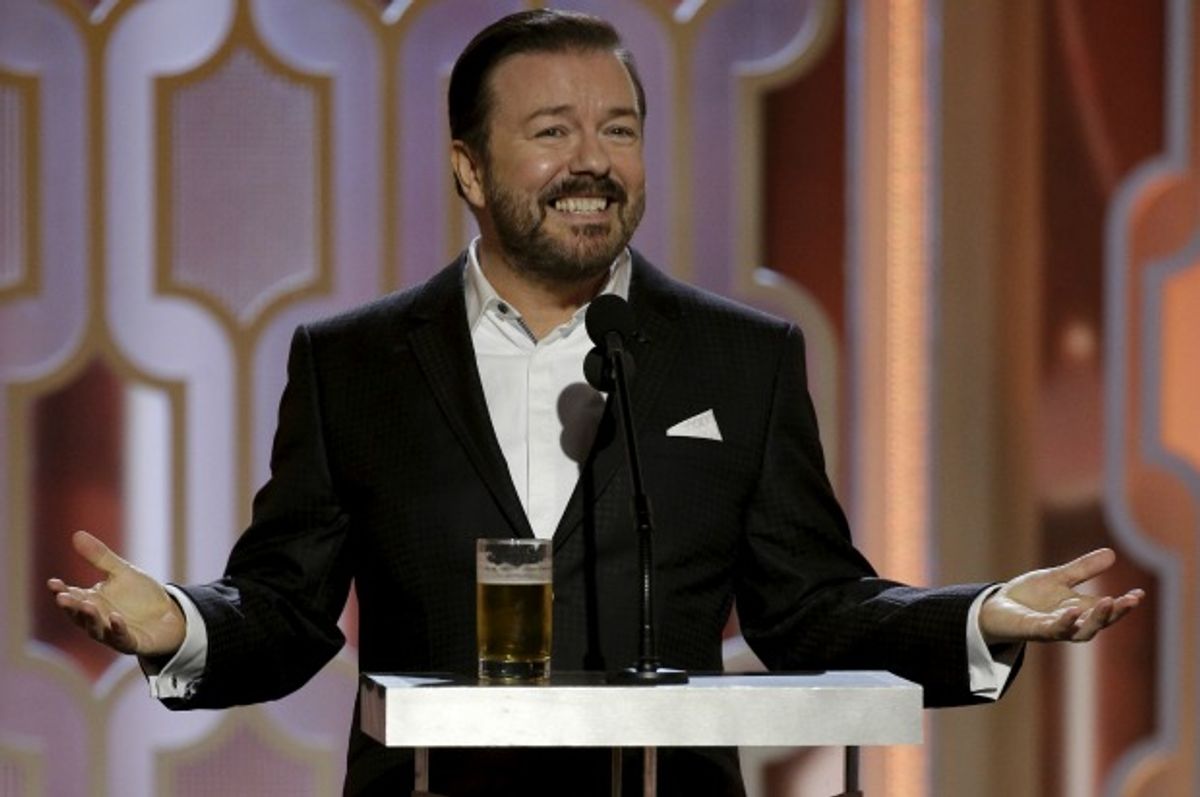 Last night, Jeffrey Tambor was all of us. During Golden Globes host Ricky Gervais’ opening monologue, the “Transparent” star was clearly not amused by the comedian’s slew of tired, transphobic jokes; these included jabs at Caitlyn Jenner, Eddie Redmayne, and Maura Pfefferman, the character Tambor plays on the aforementioned Amazon dramedy. “I'm going to be nice tonight,” Gervais quipped, as he greeted the audience. “I've changed. Not as much as Bruce Jenner, obviously.”

In addition to that, here’s what the former “Office” actor had to say about Tambor:

“[W]hat a year he's had … What an actor, what a role. Every day, he has to put on all that women's clothes and the hair and makeup and let people film it. That takes balls. So, I don't know how he does it. I really don't. I've seen his balls. They are huge and long. I don't know, he tucked them in the bra, that thing, push them out the back and let them hang out, like a bulldog? No one knows.”

If Jeffrey Tambor’s epic side-eye showed he was thoroughly unimpressed, here’s some good news for Tambor: The jokes landed with a deadening thud, much like the rest of Gervais’ baffling fourth stint (!!!) as a host. It was a disheartening step backward after three amazing years under Tina Fey and Amy Poehler, who raised the bar for what an awards show should be. Fey and Poehler made the Golden Globes into a convivial, joyous affair—one as laden with celebrity barbs (all hail last year’s brutal Cosby jokes) as it was with genuine affection for their peers. They loved hosting the show as much as they loved the people being honored, and that adoration showed.

While Ricky Gervais routinely insisted that the Globes don’t matter, the show had quietly become the most enjoyable show of the awards season. Whereas the Oscar ceremony is ungodly long and unbearably self-important, the Golden Globes are notoriously boozy—the kind of party you would actually like to go to. In 2001, a drunk Hugh Grant lost Renee Zellweger, who won the award for Best Actress—Musical or Comedy for “Bridget Jones’ Diary.” He speculated that she must be hiding under the table, but the actress was actually in the bathroom. It was peak Golden Globes in every possible way (and utterly delightful).

In addition to the sheer entertainment value of watching your favorite celebrities drunkenly fumble through their speeches (or give up altogether—like Denzel Washington while accepting this year’s Cecil B. DeMille award), the Globes continue to succeed in many ways the Oscars fail. Last night, Oscar Isaac and Gael Garcia Bernal both took home major awards, while Mexican director Alejandro G. Iñárritu won Best Director. It was a huge win for Latinos in Hollywood, and a testament to the Golden Globes’ commitment to diversity. Black women have won the trophy for best actress in a TV drama series two years running, and in her 2016 win for “Empire,” Taraji P. Henson reminded America that she’s been waiting 20 years to finally get recognized.

If Mic’s Kevin O’Keefe argued that the Golden Globes is the “only modern awards show,” clearly no one told Ricky Gervais. The Hollywood Foreign Press clearly intended having Gervais back as hitting the reset button, but it merely undid everything we’ve grown to love about the show. Gervais’ persona is much better served on shows like “The Office,” where he’s allowed to serve as an antagonist. However, as a master of ceremonies, the “Triumph the Insult Comic Douche” shtick felt sad and desperate, like the shock jock who is constantly reminding you how “naughty” and “inappropriate” he is. He says it because it’s true!

If Ricky Gervais was ousted in favor of Fey and Poehler, it’s not because he was too edgy for America’s living rooms—as he constantly insinuated last night—but that he’s simply not very good at his job. Last night, Gervais peddled the exact same jokes he was peddling in 2012, the last time the HFPA let him host. It was a dash of Mel Gibson there and a Charlie Sheen joke here, everything you might expect from Ricky Gervais and absolutely nothing more. For someone so devoted to taking the piss out of Hollywood by exposing the industry’s hypocrisy and self-importance, he only does the industry a favor with his approach — he can be surrounded by creeps and wife-beaters (not to mention Mel Gibson!) and still somehow manage to look like the biggest asshole in the room.

The immediate lesson should be obvious: The Hollywood Foreign press needs to—for the love of God—stop letting Ricky Gervais host the Golden Globes. When they could have had, say, Melissa McCarthy (nominated for her work in “Spy”) or Dwayne Johnson (on hand to remind us what a gifted showman he is), why did the HFPA have to root through the discarded scraps of ceremonies past? Why not Kristen Wiig and Bill Hader, whose flawless chemistry during last year’s Oscars—during which they presented the award for Best Screenplay—proved what a formidable hosting duo they would be? Why not literally anyone else?

The simple answer is that, as good as the Golden Globes have gotten, they continue to have a chip on their shoulder about their daffy image. After all, this was the group that selected “The Affair” as the best drama on television in 2015 and thought “The Martian” was the most hilarious movie released in the past year. There’s no escaping the fact that the Globes will always march to the beat of their own incredibly drunk drummer, but for every off the wall pick (see: Golden Globe-winner Lady Gaga), the HFPA proves themselves surprisingly savvy. In the past years, the Globes have honored masterpieces like “Boyhood” and “The Social Network”—while AMPAS voters snubbed them for more middlebrow fare.

The Globes will never be the Academy Awards—and thank God for that. (We really, truly only need one.) But the more that the Golden Globes continue to invite Ricky Gervais to remind everyone that the show is a joke, the more it will be treated that way.