EXCLUSIVE: Bowie named Paglia's "Sexual Personae" one of his favorite books. But he helped inspire her to write it 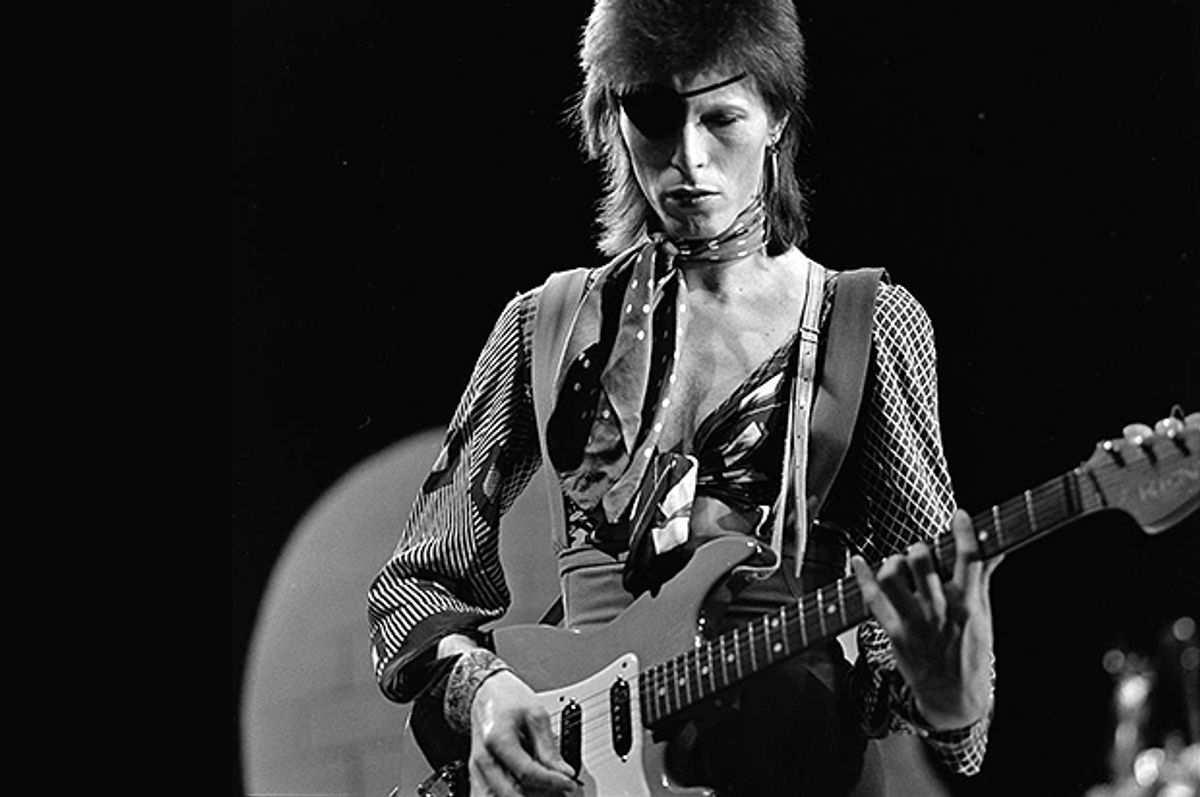 Longtime Salon contributor and columnist Camille Paglia has often hailed David Bowie as one of her central influences. Her book "Sexual Personae" was influenced in many ways by Bowie -- and then he heralded it on his list of 100 favorite books which went viral again yesterday after his death. London’s Victoria & Albert Museum asked Paglia to write the catalog essay on Bowie and gender for its blockbuster 2013 show of Bowie’s costumes, which is still touring internationally. We asked her to discuss Bowie's legacy on Monday, as the world mourned the passing of an icon.

Would you describe your first and formative experiences with Bowie? He was a mind-blowing artist to first encounter at a young age -- a pop star for whom there seemed to be no traditional boundaries, and capable of awakening such creative possibilities and awareness.

One late night in New Haven in 1969, while I was a grad student at Yale, I was listening as usual to a local FM station that played progressive rock, a brand-new medium. The host said that a strange single had arrived at the studio that day and that the station staff was divided about it—so they wondered what the listeners might think. Then he played David Bowie’s “Space Oddity.” I can remember that eerie, mesmerizing moment as if it was yesterday. An elegy for a lost astronaut (inspired by Stanley Kubrick’s film, 2001: A Space Odyssey), the song marked an epochal shift from the utopian triumphalism of the counterculture 1960s. I learned long afterward that Bowie had prophetically written the song a few months before the Woodstock Music Festival, with its heady populist dreams. Communal idealism was over. “Space Oddity,” with its bleak isolationism, looked forward to the darker 1970s, a decade of disillusion and decadent hedonism.

Bowie affected your own thinking on Sexual Personae deeply, I know. After all, he played with rock and sexual personae better than anyone before or after. Would you describe the impact he had on your intellectual thinking and how you came to view culture?

Bowie’s Ziggy Stardust period in the early 1970s had a staggering influence on me. I had been writing about androgyny in literature and art in my term papers in college and grad school, so Bowie’s daring experiments seemed like the living embodiment of everything I had been thinking about. It’s hard to believe now, but when I submitted the prospectus for Sexual Personae in 1971, it was the only dissertation about sex in the entire Yale Graduate School. I completed it in 1974, while I was teaching at my first job at Bennington College in Vermont. One of the supreme moments of my life as a student of culture occurred in October 1973, as I was watching NBC’s “Midnight Special” in my apartment in Bennington. It was a taping from London of “The 1980 Floor Show,” Bowie’s last appearance as Ziggy Stardust—a program oddly never broadcast in the U.K. Bowie looked absolutely ravishing! A bold, knowing, charismatic creature neither male nor female wearing a bewitching costume straight out of the Surrealist art shows of the Parisian 1930s: a seductive black fish-net body suit with attached glittery plaster mannequin’s hands (with black nail polish) lewdly functioning as a brassiere. I instantly realized that Bowie had absorbed the gender games of Andy Warhol’s early short films, above all “Harlot,” with its glamorous, sultry drag queen (Mario Montez). Hence I viewed Bowie, who became one of the foundational creators of performance art, as having taken the next major step past Warhol in art history. I never dreamed that someday I would see that brilliant fish-net costume inches away in a display case at the Art Gallery of Ontario in Toronto, where I was lucky enough to catch the V&A’s Bowie costume show two years ago. It was a sacred epiphany, like seeing a splinter from the True Cross.

The two Bowie albums that had the biggest impact on me were Aladdin Sane (1973) and Young Americans (1975).   Bowie’s haunting, hypnotic “Lady Grinning Soul,” with its rippling, rhapsodic piano work by Mike Garson, is a masterpiece of art-rock. My own highly controversial view of women in the expanded version of Sexual Personae (published by Yale Press in 1990) can really be seen as an epic extrapolation of “Lady Grinning Soul.” That song reaffirmed everything I had intuited about mythological woman from all kinds of sources—from classic Hollywood movies to the masterpieces of the Louvre! Then there’s “Fascination” (on Young Americans), which Bowie co-wrote with Luther Vandross and recorded in Philadelphia. As I wrote in my essay for the V&A, this gospel/funk anthem is Bowie’s artistic manifesto, the closest we may ever come to a glimpse of his creative process, both passionate and agonized. Yes, passion—emotion! Because that is what separates the great Bowie from all those sterile postmodernist appropriators, with their tittering irony. Bowie drew titanic power from his deep wells of emotion. Plus as a mime artist, he was a dancer, grounded in the body. He never stupidly based gender in language alone—like all those nerdy post-structuralist nudniks who infest academe. Who the hell needed Foucault for gender studies when we already had a genius like Bowie?

People today are talking about the shape-shifting music, the way his death was a last work of art, about his films -- but the fashion, the costumes, the theatricality of his work feels every bit as essential. I'd be especially interested in your thoughts on two eras of Bowie fashion -- Bowie as Ziggy Stardust, and then Bowie as the Thin White Duke. What was he up to, what traditions was he playing with and creating, and how did those eras, one after another, fit together?

In my V&A essay (titled “Theater of Gender: David Bowie at the Climax of the Sexual Revolution”), I was determined to demonstrate Bowie’s phenomenal courage in going against the flow of gay liberation in the 1970s. Bowie’s gender-bending costumes and overt bisexuality were not politically correct. Gay guys after the 1969 Stonewall Rebellion went macho—blue jeans, lumberjack shirts, and mustaches or Tom of Finland s&m beefcake. The studied, witty effeminacy of the post-Wildean, pre-Stonewall era was out. Although drag queens had been instrumental in the Stonewall riots, they were ostracized in hip gay bars in the 1970s.

Thus the radicalism of Bowie’s provocations. But Bowie virtually never did straight drag (a rare exception is the “Boys Keep Swinging” video in 1979). Ziggy Stardust was not a drag act—he was a shamanistic daydream, half kabuki, half Weimar cabaret. With the Thin White Duke, Bowie did a rigorous, self-purging exercise in minimalism, exactly as John Lennon had done on his Plastic Ono Band album, where the Beatles’ studio excesses were stripped away and all that remained was a cool, lucid, echoing piano. As the Thin White Duke, Bowie shifted into Byron-in-exile mode; he was now a haughty, self-shielding arbiter of elegance in the Baudelaire manner. Great artists of Bowie’s dimension know when to shift gears and return to basics. Ziggy Stardust had become too vampiric and had to be assassinated for Bowie to live.

I know that Bowie attempted to get in touch with you in the early 1990s when he wanted to use excerpts from Sexual Personae on an album--and you didn't believe that it was actually him. What was he interested in using, and did you ever have later personal interactions?

Oh, lord, that was one of the biggest fiascos of my checkered career! I have no idea what passages he had in mind. A woman called my publisher and said that David Bowie wanted my telephone number. When this was relayed to me, I laughed out loud and hooted, “That takes the cake! Right—David Bowie wants my phone number!!!” I was on TV a lot during that period of the culture wars, and there was always some crazy thing happening, with fans sending gifts or trying to finagle a meeting. We tried repeatedly to authenticate the request, but everything was so vague and shadowy. It made no sense—why would a major star not be communicating via a manager or major entertainment agency? Well, I didn’t know until decades later that Bowie had fired his entire corporate management structure after he went to Berlin in the 1970s and that he interacted with the world through a small cadre of old, trusted friends. I did eventually learn that he was an admirer of my work—for example, he put Sexual Personae on a published list of his favorite books. It’s not surprising, really, considering how profoundly he had influenced me. No wonder he felt at home with my ideas—he was sensing himself mirrored back! Evidently, the suggestion that I write the gender essay for the V&A catalog came ultimately from him, but we never met in person. Nor would I have wanted to, I think. With artists of such towering stature, it’s best to keep a respectful distance.

Bowie was omnivorous and eclectic—a lifetime student of all of the arts. He was a painter, for example, and he also had superb instincts for photography—which is why his album covers and pioneering videos were so wonderful. With his rich love of privacy and his shunning of celebrity ostentation, Bowie showed how a long, fruitful creative career can be nourished and sustained. His passing also dramatizes the abysmal mediocrity and banality of too much of today’s popular culture. Aspiring young artists should model themselves on the protean Bowie, who ransacked art history for ideas and who never lost his cultural hunger.