The dark age of congressional warfare: Inside Obama's last State of the Union & the fight for the future of government

A look back at the clash that defined Obama's presidency—and will likely define the next one, no matter who wins 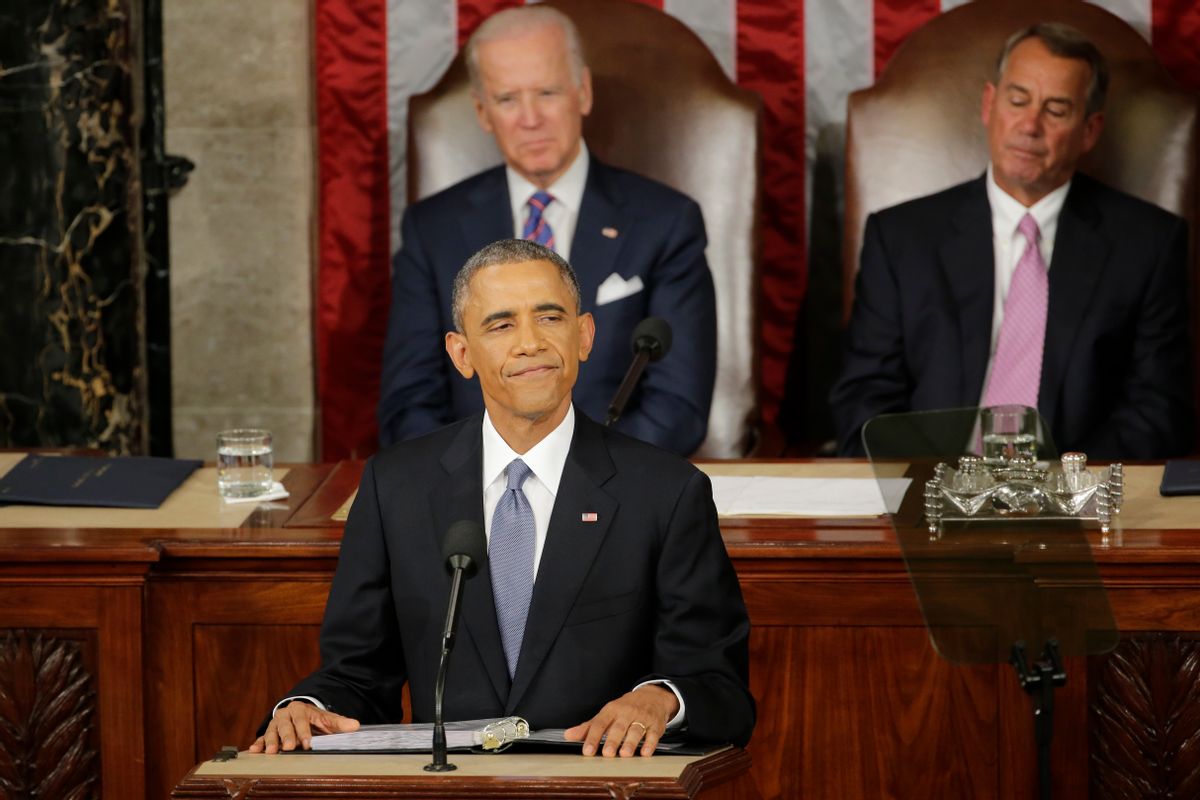 Awaiting the last Obama State of the Union address tonight knowing that we'll never hear his sonorous voice addressing a joint session of Congress again undoubtedly makes Democrats feel a little bit wistful and nostalgic. It's the end of an era. But unfortunately, it's not likely to be the end of the era of gridlock that was ushered in on January 20, 2009. For all the promises made on the campaign trail by candidates of both parties, the dynamic between the White House and the Congress is unlikely to change very much.

Recall those heady days seven years ago when President-elect Obama's promise to unite the two parties to work for the common good was still an article of faith among the true believers. The fact that he had managed to transcend America's great original sin to become the first African American president was an amazing political feat but too many people, including some in the administration and at times the president himself, understood that to mean that he had pacified the Republicans. During the transition, the assumption was that there was a unique opportunity to solve all the big problems at once due to this unique historical moment.

On January 15, 2009, EJ Dionne of the Washington Post wrote a column called "Audacity without Ideology" that laid out the administration's thinking:

There are at least three keys to understanding Obama's approach to (and avoidance of) ideology. There is, first, his simple joy in testing himself against those who disagree with him. Someone who knows the president-elect well says that he likes talking with philosophical adversaries more than with allies.

But Obama's anti-ideological turn is also a functional one for a progressive, at least for now. Since Ronald Reagan, ideology has been the terrain of the right. Many of the programs that conservatives have pushed have been based more on faith in their worldview than on empirical tests. How else could conservatives claim that cutting taxes would actually increase government revenue, or that trickle-down economic approaches were working when the evidence of middle-class incomes said otherwise?

The second key was the quite obvious fact that the economy would require liberal solutions with which nobody on the right could possibly disagree so there was no need to even talk about ideology. Obama could just subsume all objections under "mountain of data" and that would be that.

The third key was the "telltale notions" that would define his presidency: "sacrifice," "grand bargain" and "sustainability." Sacrifice was the benefits people would have to give up in order that the president could reform the government from top to bottom. This would entail figuring out a way to control health care costs, cut the "entitlements" and get limits on carbon emissions. And because this was all just simple common sense and so very pragmatic, the political system could have no objections.  Dionne described it his way:

The "grand bargain" they are talking about is a mix and match of boldness and prudence. It involves expansive government where necessary, balanced by tough management, unpopular cuts -- and, yes, eventually some tax increases. Everyone, they say, will have to give up something. Only such a balance, they argue, will win broad support for what Obama wants to do, and thus make his reforms "sustainable," the other magic word -- meaning that even Republicans, when they eventually get back to power, will choose not to reverse them.

The economy was in freefall, the election had been decisive and the new president came in with a congressional majority so it was reasonable for the Democrats to believe they had a mandate. But despite the fact that there had been a bogus impeachment, a stolen election and a war based upon lies, the president didn't seem to have truly recognized what the Republican Party had become. They were not on board with his plan to "pragmatically solve problems" and everyone should have been crystal clear on that when the Senate could only get three Republicans (Collins, Snow and Specter) to vote for a stimulus package to deal with the worst economic crisis since the Great Depression.

By the time the Democrats started putting together a health care plan, the Tea Party had been formed and a plan was in place. Senator Jim DeMint was declaring, "if we’re able to stop Obama on this it will be his Waterloo." They did everything they could but they couldn't stop it. Obamacare passed on a party line vote and a year later, Senator Mitch McConnell said, "the single most important thing we want to achieve is for President Obama to be a one-term president."

Republicans didn't even pretend to be dealing in good faith and decided that their midterm victory meant they had a mandate to control the government from one house of Congress. The result was the debt ceiling crisis, a government shutdown and sequestration. The president proposed his Grand Bargain idea of cutting Social Security but the Tea Party would have none of it as long as the White House insisted on getting some revenue from the wealthy.  It was hopeless.

As former Obama administration staff member Dan Pfeiffer said, “He had hopes of being able to change the polarization, not just in the country, but in Washington." But they learned it was a lot harder than they thought. Pfeiffer said it was President Obama's biggest regret that he had not been able to deliver on that promise.

But nobody could have delivered on that promise. The polarization that exists today has always been with us. What's new is that the two parties are now divided ideologically when in the past the ideological divide existed within both of them. Our system, with all of its checks and balances, doesn't work very efficiently under such conditions.

(This is usually the point at which someone makes the case for switching to a parliamentary system, which more easily accommodates such a situation.)

Thinking about this recent history inevitably makes you wonder what will happen with the next president. It's logical to assume that if one of the Republicans wins next November this dynamic would change. One of the most frightening political scenarios imaginable is one in which a President Trump or Cruz wins the presidency and has a congressional majority to help them enact their agenda. But it pays to keep in mind that President Obama had that (for an admittedly short period) along with a major crisis which demanded government action. We know how that turned out.

There's no guarantee that this would happen under a Trump administration, of course. But he is so eccentric (to put it politely) that he would likely find himself at odds with his own party on much of his agenda. It's very hard to see how such a person could even function. A President Cruz is a much clearer proposition. His party establishment has no love for him but he is smart and resourceful and would likely hit the ground running with a plan to enact his agenda. But like President Obama, he would likely have a very short window in which to do it.

It's fair to assume he's aware of that. Whether any of the so-called establishment candidates get that is an unknown but both Bush and Kasich have been out of Washington for a long time and Rubio seems to be oblivious to its current dynamics.  But regardless of which one might win, the first two years of a GOP administration with a GOP majority would be a very dangerous time.

One assumes the Democrats are all fully aware of what they are dealing with at this point. With the Republicans still in full extremist mode, unless the Democrats win an unprecedented landslide (very unlikely in this polarized political environment) a progressive agenda will probably only be fulfilled around the edges. There are no more illusions of Grand Bargains and changing the polarized political system through pragmatic policies designed to give everyone a little of what they want. Until these Republicans sober up, the best we can hope for is that Democrats can keep the GOP from dismantling every bit of progress that's been made over the past half century and stop them from starting World War III. There's nothing more important than that.