The harsh truth about El Chapo's arrest: Everything is still horrible, no matter what

As long as the disastrous War on Drugs persists, disaster will always follow in its wake 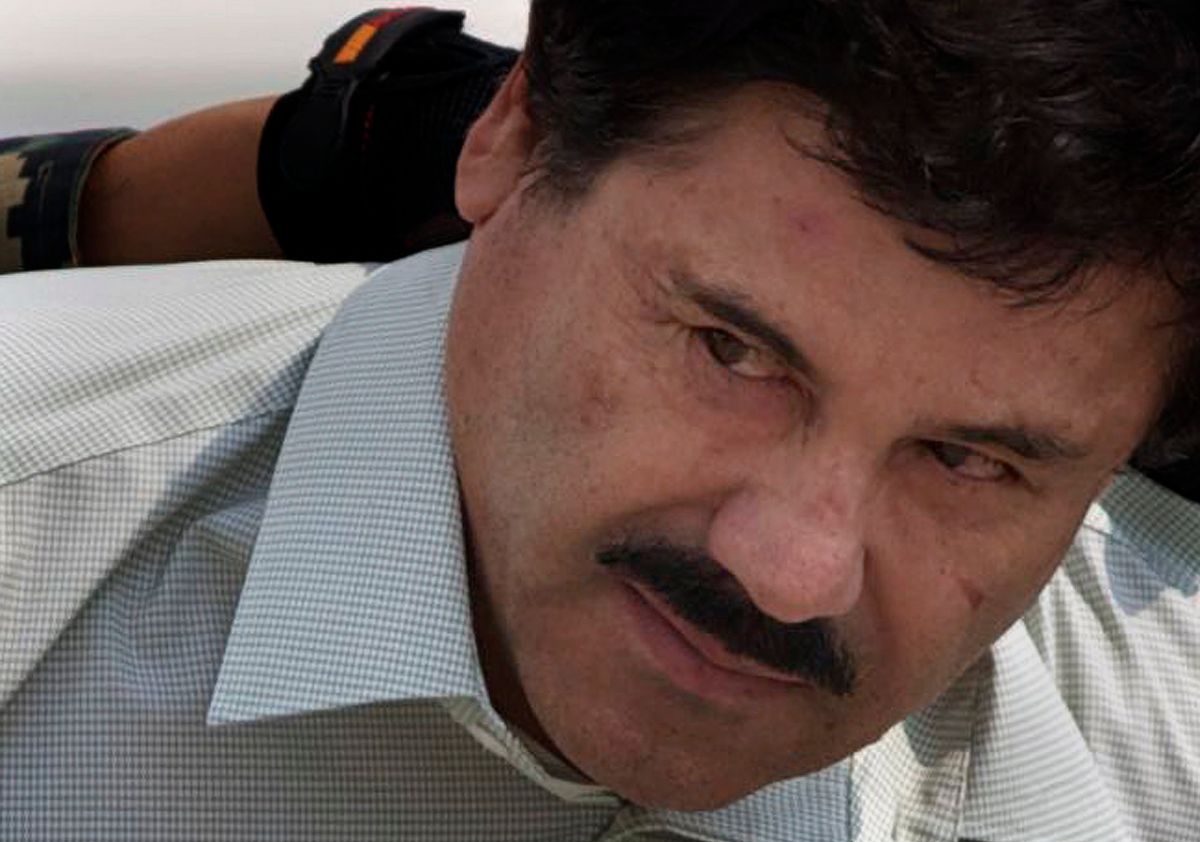 Sinaloa Cartel boss Joaquín “El Chapo” Guzmán Loera is caught once again. Sean Penn was involved, which is exciting. So, obviously, journalists are busy dissecting the episode from every possible angle. El Chapo's escapades comprise the sort of true crime drama that American writers and readers have wanted for since the decline of the Italian mob. It's all super entertaining -- which is no accident given the cult of personality actively cultivated by drug lords like El Chapo and celebrated in triumphant corridos.

The most remarkable thing about El Chapo's capture, however, is what's left unsaid: no authorities in Mexico or the United States have yet, as far as I'm aware, articulated how El Chapo's arrest will do anything to make drugs less available on American streets, which is the drug war's ostensible purpose.

That's because it won't.

“It's a glaring omission but not many people have picked up on that,” says Laura Carlsen, director of the Mexico City-based Americas Program of the Center for International Policy.

The Drug Enforcement Administration called Guzman's capture “further evidence of our two countries’ resolve to ensure justice is served for families who have been plagued by Guzman-Loera’s ruthless acts of violence.” The DEA, however, says nothing about how his arrest might impede the availability of the “heroin, methamphetamine, cocaine and marijuana” that El Chapo told Sean Penn he supplied in quantities greater “than anybody else in the world” via “a fleet of submarines, airplanes, trucks and boats."

That's because it won't. And the U.S. government knows this.

A report by U.S. Customs and Border Protection's Office of Intelligence and Operations Coordination analyzing drug seizure data from January 2009 through January 2010 concluded the obvious: arresting or killing kingpins apparently does nothing to keep drugs from the U.S.

“The removal of key personnel does not have a discernable [sic] impact on drug flows as determined by seizure rates,” the analysis states. “DTO [Drug Trafficking Organization] operations appear to have built in redundancy and personnel that perform specific duties to limit the damage incurred by the removal of any one person. By sheer volume alone, drug operations would require more than one individual to coordinate and control the process.”

It's not just, however, that the drug war is ineffective. In reality, it creates more and novel forms of harm. Decapitation, for one, not only fails to stem the flow of drugs but can spur further violence. “Generally speaking, this kingpin strategy is a factor that foments rather than reduces violence and public insecurity here in Mexico,” says Carlsen.

It was the arrest and 2007 extradition of Gulf Cartel leader Osiel Cardenas Guillen, according to InSight Crime, that prompted the Zetas, former special forces operatives working as the cartel's ruthless enforcers, “to strike out on their own” and “set up their own independent drug, arms and human-trafficking networks.” Cardenas' arrest and extradition to the U.S., rather than decreasing the flow of drugs, instead helped create “a new model of organized crime, based on violently seizing and holding smuggling territory, using fear rather than corruption as their first resort.”

In 2012, Mexican security consultant and columnist Eduardo Guerrero Gutiérrez published a study analyzing the wave of drug violence that exploded beginning in 2008, blaming it in large part on the government's strategy of capturing narco leaders.

Such arrests caused violence to explode in three ways, he writes: by encouraging cartel subordinates to fight for control of the organization, by provoking reprisals within the organization targeting those suspected of providing information to law enforcement, and by enticing rival organizations seeking to exploit the cartel in a moment of weakness.

He points to the violence that swept through Culiacán, where “the arrest of Alfredo Beltrán Leyva, El Mochomo, in January 2008, was the event that precipitated the rupture between the Beltrán Leyva Organization and the Sinaloa Cartel, because the Beltrán Leyva family believed that Joaquín Guzmán Loera, El Chapo, had given information that made his capture possible.”

In Tijuana, “the capture of Eduardo Arellano Félix in October 2008 was the event that sparked the epidemic of violence” as members of his cartel “decided to establish an alliance with the Sinaloa Cartel, which brought about a violent confrontation with the Arellano Félix family.”

In the Guadalajara area, “the epidemic of violence began as a result of the fragmentation of the Milenio Cartel in two rival fractions...after the detention of its leader, Juan Nava Valencia, in May 2010.”

In Acapulco, the 2010 capture of cartel leader Édgar Valdez Villarreal, La Barbie, led to to a “rapid fragmentation of the criminal organizations that operated” in the city “which in turn generated a dramatic increase in violence and insecurity.”

It's impossible to know how the Sinaloa and other cartels will respond to El Chapo's capture. But one thing, as InSight Crime notes in a recent analysis, is certain: the Sinaloa Cartel “remains one of the most powerful, monolithic drug trafficking empires in Mexico, and there is little to suggest that Chapo's jailing will severely hamper their worldwide drug distribution services.”

The drug war strategy is to break the cartels by arresting its leaders. But the drug war can do nothing to change the basic economic architecture that entices traffickers: the unbendable persistence of American demand.

“I would expect the street price of cocaine, heroin, methamphetamine, other drugs moved by the Sinaloa Cartel to remain pretty much the same in the aftermath of his most recent arrest," says David Shirk, a political scientist at the University of San Diego and director of the Justice in Mexico program.

Drug prohibition literally creates the black market that sustains traffickers. Much of the violence is then created as various cartels, their fortunes ebbing and flowing in part due to government enforcement actions, engage in bloody fights with one another to control smuggling territory, known as plazas. The history of Mexican cartels—the alliances, splits and splinters—is a patchwork of violent conflict caused by internal disputes, government capture and killing, and by the interaction between the two.

The drug war, like certain other ill-conceived and un-winnable U.S.-led armed conflicts, has long since entered a strange twilight phase: No one much remarks on why it started or why it is being fought at the expense of billions of dollars and countless lives.

The drug war does have concrete accomplishments. It has helped push the American prison and jail population to more than two million and fostered a violent black market that has carved a bloody path from Colombia to Afghanistan. In Mexico, 164,000 were estimated to have been murdered between 2007 and 2014. Estimates, necessarily imprecise, have pinned between a third and more than half of those deaths on drug-related violence.

Meanwhile, there is no evidence -- or even plausible argument -- that the drug war has done anything to curb illicit drug use. There is really no suggestion that the whole enterprise is anything more than a morality play, and a pretext for the U.S. government's domestic incarceration agenda and the military-industrial complex's foreign policy adventures.

For the Mexican government, El Chapo's capture sends a faint if unconvincing signal to citizens that the state is not en thrall to nacro-traffickers. “Mission accomplished: we have him. I want to inform Mexicans that Joaquín Guzmán Loera has been detained,” tweeted President Enrique Peña Nieto, complimenting his security officials on an “important achievement toward the rule of law in Mexico.”

For their American counterparts, Guzman's arrest is points on the board against a criminal enemy, and a message that the narco lords who have slaughtered tens of thousands of Mexicans will be held to account.

In recent years, drug related violence has declined across Mexico. But some analysts say that the newfound (and relative) peace is not a result of a drug war victory or the consolidation of the rule of law displacing corruption so much as rival cartels agreeing to peacefully divvy up territory or the consolidation of power by the Sinaloa Cartel, as reportedly took place in Ciudad Juárez.

The surreality of the news coverage reporting El Chapo's capture echos the upside-down world of the Vietnam War's later years, when Richard Nixon insisted that the war must go on in order to free American prisoners of war—never mind that it was the war's continuation that guaranteed POWs continuing imprisonment, and that it was invading Vietnam in the first place that led to their capture.

The drug war was supposed to solve the problem of illegal drugs. Instead, it has spread drug addiction to drug-supplying regions and fomented cataclysmic violence. Now, bizarrely, drug warriors point to the need to stop that violence to legitimate the drug war. The only way to stop the violence, of course, is stop the war, and the only way to shutdown drug cartels is to offer drug users a legal and regulated alternative. Drug legalization is a threat to drug warriors on both sides of the conflict. It's a shame that it gets so little attention.