We need to talk about Ben: Kylo Ren, "Star Wars" and the media narrative of the mentally ill school shooter

The back story of "Star Wars: The Force Awakens"' villain invokes how we talk about young white male mass killers 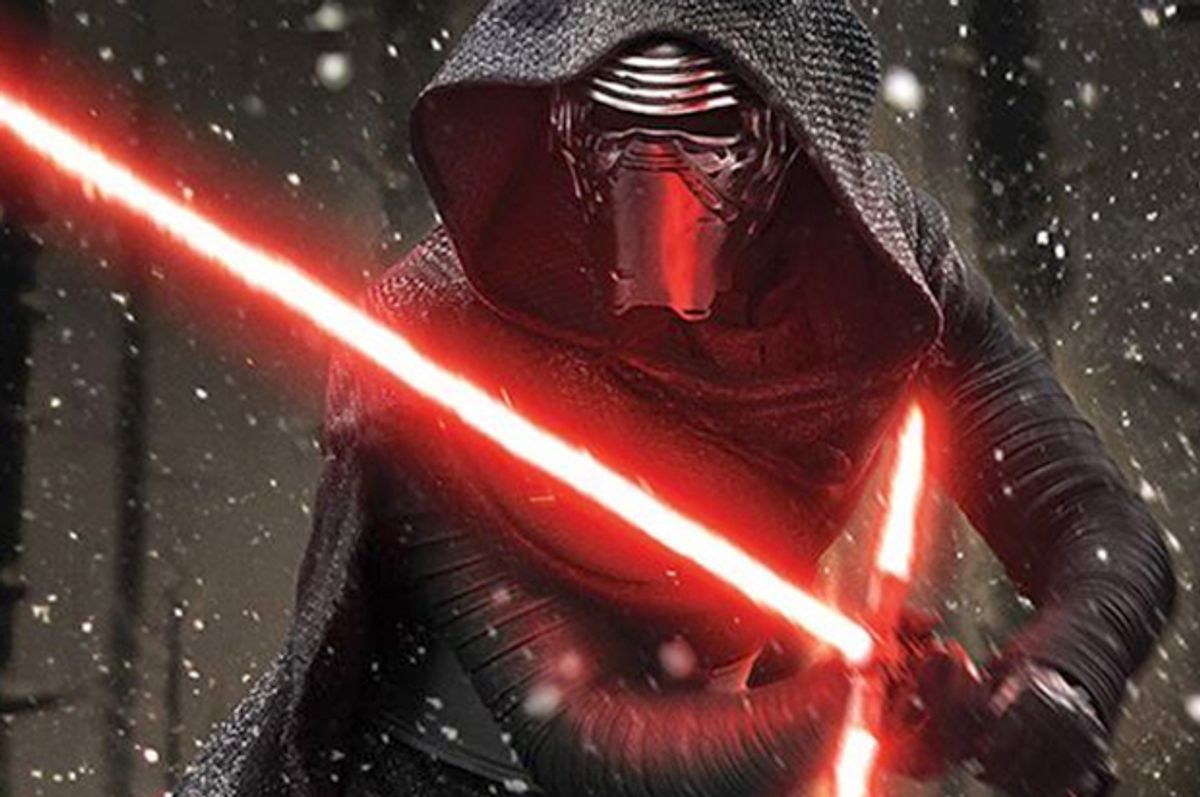 Note: Serious spoilers for "Star Wars: The Force Awakens" appear throughout this article.

Before Kylo Ren was a modern iteration of Darth Vader, he was Ben: the problem child of Leia Organa and Han Solo, who murdered a group of his Jedi trainee peers. On-screen in “The Force Awakens,” he’s all theatrical evil and Pantene-commercial hair, but it’s the off-screen arc that is the most disturbing and fascinating facet of the character. Zooming in on his sinister back story, Kylo Ren presents a sci-fi version of the “mentally ill” school shooter with whom we’ve become all too well acquainted in the news.

At a loss for how to raise their son, Leia and Han send Ben to Luke’s Jedi school. There, Ben betrays his teacher and murders his army of padawans. In the present day, Han and Leia are tortured over what their son has become. Contemplating where they went wrong, Leia tells Han they lost Ben long before they sent him away. The subtext is clear: There is nothing they could have done. It’s a troubling sense of inevitability all too often associated with the young men who commit acts of violence.

The plot of this un-pictured story line features remarkable similarities to Lynne Ramsey’s “We Need to Talk About Kevin” (which happens to star Ezra Miller, who could easily be Adam Driver’s weird twin). In the 2011 film, Tilda Swinton (Eva) struggles to reconcile her son’s emerging sociopathy in the years before he commits a massacre at his high school. Eva finds it impossible to love the boy even as a small child, when he’s refusing to listen to her and deliberately shitting his pants. The slow march to Kevin’s mass murder is paced out between flash-forwards of Eva mired in the aftermath of her son’s crime. Again, there is a certain fated quality to the horror Kevin commits, as if there’s nothing his mother might have done to stop it.

That sense of eerie certainty is implicit in the “mentally ill” label we so liberally slap on the white men behind mass shootings. When Jaylen Fryberg opened fire on his Marysville-Pilchuck High School classmates in October, the media quickly painted him as “anguished” and “full of angst.” Following the shooting in San Bernardino, Paul Ryan responded, saying, “People with mental illness are getting guns and committing these mass shootings.” After Dylan Roof murdered nine people at the Emanuel AME Church in Charleston, South Carolina, Fox published an Op-Ed claiming he “showed all the signs of severe and worsening mental illness.”

In nearly every case, directing attention to mental health becomes a copout. It removes societal culpability, discussions of gun restrictions, domestic terrorism and toxic masculinity, in favor of the easier-to-stomach idea that suspects are damaged. According to a poll by the Washington Post, "By a more than 2-to-1 margin, more people say mass shootings reflect problems identifying and treating people with mental health problems rather than inadequate gun control laws." As Mother Jones wrote of the study, these results “perpetuate a dangerous stigmatization,” especially considering that statistics show that most people who commit acts of violence do not suffer from mental illness.

There’s relief in the idea that mental illness is to blame. Bringing up structural mental health deficiencies redirects the conversation each time it is conveniently paraded out in the wake of mass shootings. Never mind the fact that it’s an inaccurate claim. The stigma surrounding mental illness prevents us from engaging with a lack of treatment as the proposed cause, and allows us to paper over the forces behind these atrocities with reassuring inescapability. If perpetrators of violence are bad apples in an otherwise functional system, then there’s a total lack of efficacy; gun regulations (and a closer look at this country’s enduring white supremacist patriarchy) are off the hook. “Something is wrong with him” is a far easier way to cope than dealing with the things that might be wrong with us.

The family units in the “The Force Awakens” and “We Need to Talk About Kevin” become a myopic representation of this notion. They’re all nature and no nurture. In the latter, an imperfect yet stable home is irrelevant to Kevin’s inner rottenness. His maliciousness grinds to its aggressively foreshadowed apex regardless of Eva’s desperate attempts to find affection for her son. He is positioned as a curse cast upon her, a problem even the most idealized home life couldn’t have fixed.

The infeasible struggle for Kylo Ren’s soul is further hyped up by his mythic setting. He is explicitly fighting off the internal conflict of the light and the dark side -- in case the good vs. evil analogy was yet unclear. But when his father extends himself, offering to do something, anything, to help, Kylo Ren responds by light-sabering him through the heart. If being born to and trained by the three most iconic heroes of the “Star Wars” canon couldn’t save him, what could? The irresistible pull of the dark side becomes a stand-in for the national excuse of mental health. Ben became Kylo Ren because he’s sick and, as “Star Wars” and public opinion would have it, there is no cure.

Lauren Duca is a writer, reporter and L.A. Press Club award-winner. Her work can be found in The Guardian and New York magazine, in addition to other places, including a weird scrap book her parents have been making since she was in kindergarten. Follow her on Twitter: @laurenduca.