On the Oz show, Sheen reveals he went off his HIV medications—and even Oz was skeptical of the process 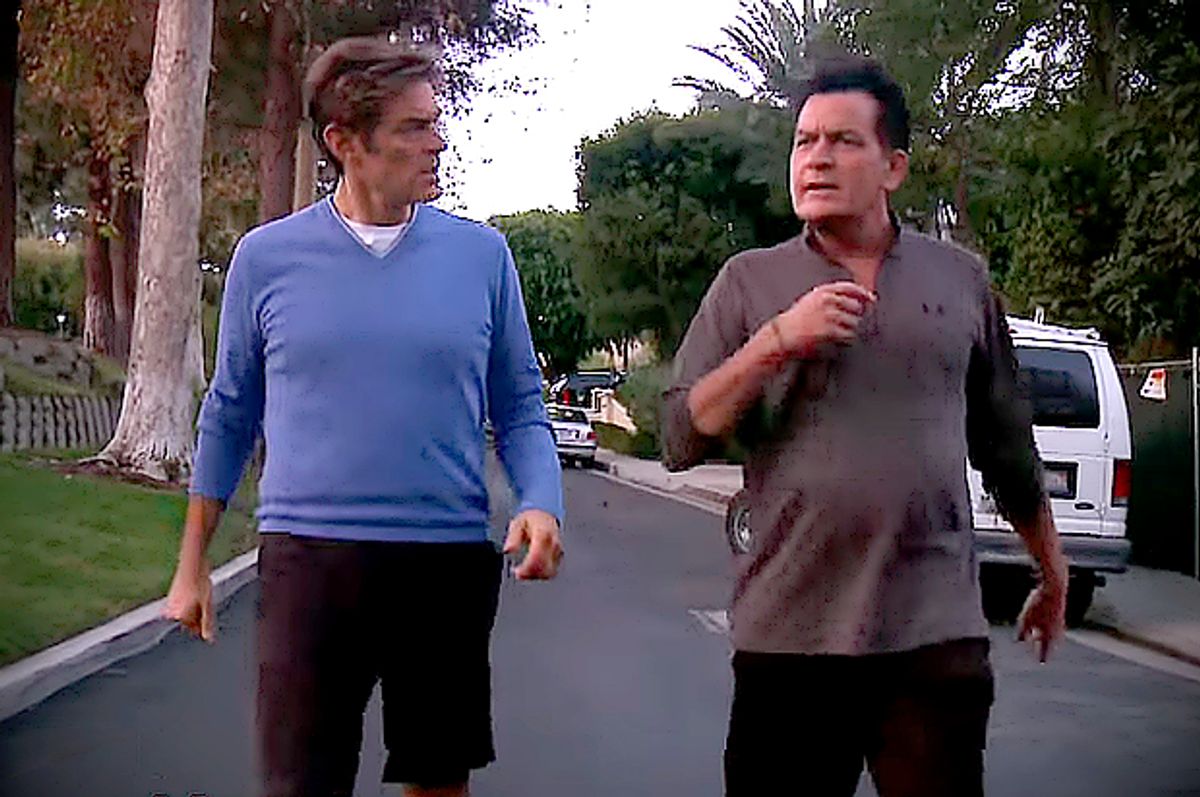 Charlie Sheen and Dr. Oz — if you'd ever guessed they'd be a match made in quackery heaven, then Tuesday's episode of "The Dr. Oz Show" would have proved you correct.

When the 50 year-old Sheen announced in November that he had been HIV positive for four years, he seemed very different from his "duh, winning" persona of just a few years earlier. Sitting on the "Today" show with his doctor, he spoke of his rigorous medication regime, and said, "I have a responsibility now to better myself and to help a lot of other people." And he vowed that he would "not shun away from responsibilities and opportunities that drive me to help others, and deliver a cure." So cut to Tuesday, and Sheen admitting in a pre-taped segment, "I feel like there's mantra, 'Stay on your meds, stay on your meds, stay on your meds…' I’ve been off of meds for about a week now, and I always feel great. And yeah, am I risking my life? Sure. So what? I was born dead. So that part of it doesn’t faze me at all. I told my mom on day one that the disease picked the wrong guy if it wanted to stay alive."

When Sheen revealed his condition last fall, he and his doctor, Dr. Robert Huizenga, claimed that the level of HIV in his blood was "undetectable." And on Tuesday's show, Oz showed a chart that seemed to confirm the viral load in Sheen's blood had been "back to normal, undetectable" since six months after he began treatment in 2011. But Sheen then shared that right before the show, he'd received "some results I was disappointed about... The numbers were back up." He then revealed that he'd gone to Mexico to seek alternative treatment from Dr. Samir Chachoua, who Oz says is not licensed to practice in the U.S. A site purportedly "created by a Group representing all the very ill and terminal patients successfully treated and cured by Dr. Sam Chachoua" claims "Nothing is incurable" and that "This brilliant man tried to end AIDS and cancer twenty years ago but had his work stolen and destroyed." It also sells his "universal elixir supplement" for $396.

Speaking with Oz on the phone, Chachoua claimed Sheen is "the first adult in history to go HIV negative. The conventional medicine has never done that. He was still HIV positive five years after he started his antivirals. His count went down after taking my treatment." Sheen told Oz the treatment involved "injections and bloodwork, and we did see some incredible results early on." And later, Oz revealed "something I never thought I’d hear out of the mouth of a doctor" — a clip of Chachoua on the phone, saying he'd injected himself with Sheen's blood — an incident Sheen confirmed happened. It was an act that Oz described understatedly as "pretty inappropriate."

To his credit, Dr. Oz, who's run afoul of legitimate facts countless times in his television career, been wrist slapped by the FDA and been challenged repeatedly by the medical community for his "disdain for science and for evidence-based medicine," did some due diligence with regard to Chachoua's claims, bringing out Dr. Michelle Cespedes to explain how a "cure" is truly defined. And then, boom, Sheen's doctor was also on hand to say that it would "break my heart if you did anything to risk returning to that horrible part of our history" and that Sheen's "inflammation levels went up a hundred fold over the last several weeks." Oz told Sheen flat out, "I think you ought to be on your meds. Your doctors believe that." And Sheen replied, "I'm gonna take them on the flight home. What am I, an idiot?"

It was a strange piece of television, with its mix of studio audience cheers, celebrity fawning and snake oil investigation. In the end, in his self-aggrandizing way, Oz told Sheen, "You're brave. I want to keep sharing your journey with the entire world. And as long as you're willing to continue to be brutally honest, warts and all, we will do this together." It seemed a vow that Oz was somehow going to experience Sheen's HIV with him, which is the sort of thing people who don't have a medical condition unhelpfully say to those who do. More troublingly, it seemed to offer Sheen an opportunity, no matter what dubious roads he may travel, that he'll always have a platform to share them, and an audience that will always applaud.