Maybe the connection between 3 birthdays—two real, one fictional—goes deeper than we thought [UPDATED] 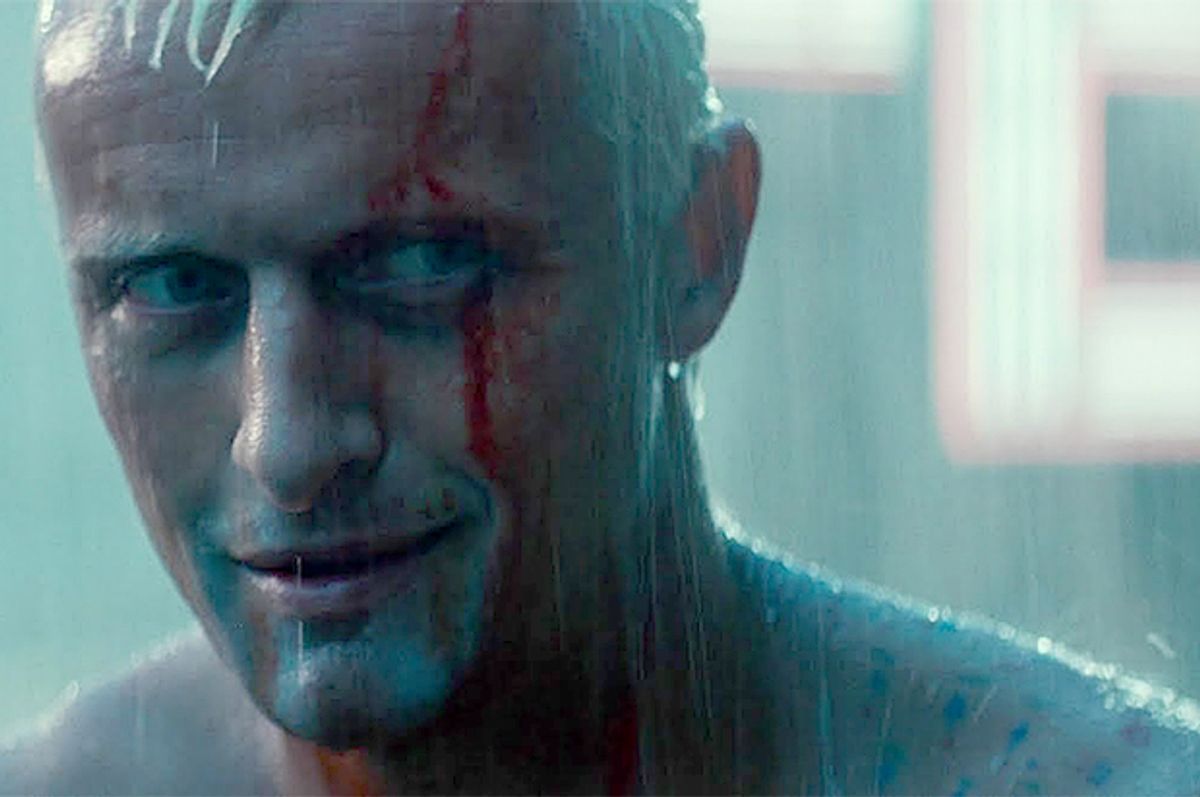 January 8, 2016, was the “inception” date for Roy Batty, the head replicant in Ridley Scott’s cult film, “Blade Runner.” January 8 is also the birthday of the Man Who Fell to Earth, David Bowie, who shared that birthday with the King of Rock and Roll, Elvis Presley. Coincidence? I think not, at least not as far as Roy’s inception date is concerned. Let me explain.

Ridley Scott's “Blade Runner” (1982) was very loosely based on Philip K. Dick’s 1968 novel, “Do Androids Dream of Electric Sheep?” Instead of losing relevance and power over time, as so many dystopian sci-fi flicks do, it’s aged exceptionally well. Its immersion inside a  neo-noir, trash-punk sensibility now scans like a documentary, even as its futurecasting of a planet become a One-World cesspool stubbornly clinging to the decayed armature of the forces that destroyed it--i.e. predatory capitalism--is also strangely apt. By 2021, the storyline goes, all animal species are extinct except for humans; the wealthy have decamped off-world to Mars; and what social order remains on earth comes courtesy of the Tyrell Corporation, which runs the police and also manufactures androids “more human than human.” These are replicants. They are not robots but biological machines, and in that sense are just like people.

Per 17th century philosopher Descartes, the body is a machine; it’s the soul that makes us human. Replicants bleed. They have feelings. Yet they are not people but property manufactured to do the work too vile or dangerous for natural-born humans to do. The female models are often sex workers. Some, like Roy Batty (whose name alternately means “embattled king” or “crazy king,” in the manner of the Fisher King of legend) are combat models designed to be smarter and stronger than humans. The latest line of new and improved replicants are “Nexus 6.” A group of four has escaped to earth. Now in hiding from their owners, they must be found and destroyed.

Meanwhile, in the wake of David Bowie’s death, music geeks are already going nuts over the fact that Bowie had covered an Elvis Presley song from a 1960 film originally called “Black Star.”The track that Elvis recorded for it was released in the 1990s under the name, “Flaming Star.” Bowie then covered that Elvis song for his own new album, also titled “Blackstar.” The lyrics to both Elvis’s and Bowie’s versions are transcribed in full here. Bowie’s lyrics are very different from Elvis’s, and include the following:

Was Bowie influenced by “Blade Runner” here? You could make that argument, given the specifics of the lament of being born upside-down in an economically-inverted world; the references to the “pornstar” (Pris, the “pleasure model” replicant played by Daryl Hannah, has an inception date of February 14, Valentine’s Day); and the “wandering star,” Roy Batty, with whom the original Space Oddity shares a birthday. The question is, did the screenwriter give Elvis/Bowie’s birthday to Roy Batty on purpose? In 1976, of course, Bowie became the Man Who Fell to Earth, and that film told the story of an alien disguised as a human whose own planet is dying. Consider Roy’s final speech before he dies.

I've seen things you people wouldn't believe.
Attack ships on fire off the shoulder of Orion.
I watched C-beams glitter in the dark near the Tannhäuser Gate.
All those moments will be lost in time, like tears...in...rain.
Time to die.

The “tears in rain,” monologue is one of the most celebrated short speeches in film, and it turns out that actor playing him, Rutger Hauer, ad-libbed parts of it. Its power comes from the fact that we know that Roy knows that he is dying, with the final meta-poignancy coming from Hauer claiming the right to use his own words rather than remaining obedient to the script. It is a plea for poetry inside a ruthless world that measures all things against the dollar.

And yet, Roy isn't dying because policeman Rick Deckard (Harrison Ford), the cop conscripted to hunt down the four replicants, delivered the mortal blow. To make them “safe” to use, all replicants are manufactured to self-destruct after four years of use, even while ensuring continuing market demand for these disposable commodities. Because they are otherwise exactly like humans except for developing fast and dying young, it takes special skills to identify them. Deckard has these skills. Thus America learned for the first time about the Turing test (called a “Voight-Kampff” test in the film), a series of questions meant to determine if the speaker is human or nonhuman. Notably, that test popped up twice in recent films--once in the “Imitation Game,” and again in “Ex Machina”--forcing us to see the collisions of legal systems with ethical ones.

Replicants are born to die; their existence is only tolerable because they cannot outlast their "best used by" expiration date. The question is this: How far away is the day that we're similarly reduced to the conditions of our labor, our social utility defined by our ability to make money for corporations? 2021 -- the year that all the animals died and society irrevocably changed -- isn't the distant future anymore.

It has long been rumored that Deckard was assigned to destroy the replicants because he was himself a replicant—an outlier model manufactured to be unware of his own artificial origins.  And now, a sequel to “Blade Runner” is replicating that dynamic, with Harrison Ford and Ryan Gosling signed on. I am not sure how I feel about this, but I hope Ridley Scott decides to add Bowie’s “Blackstar” to the soundtrack. It would be a fitting tribute:

How many times does an angel fall?
How many people lie instead of talking tall?
At the center of it all, your eyes, your eyes.

CODA: A sharp-eyed Salon reader from Omagh, Ireland, who calls himself "Francisco Scaramanga," pointed out that Bowie's note on a bouquet sent to the funeral of his schizophrenic half-brother, Terry Burns, bore the words: "You've seen more things than we can imagine, but all these mo­ments will be lost, like tears washed away by the rain. God bless you. —David."

Paul Trynka, author of "David Bowie: Starman," confirms that Scaramanga is correct. The words offer a close paraphrase of Roy Batty's famous monologue, and draws a straight line between the "mad king" and the tragic suicide of Bowie's brother.