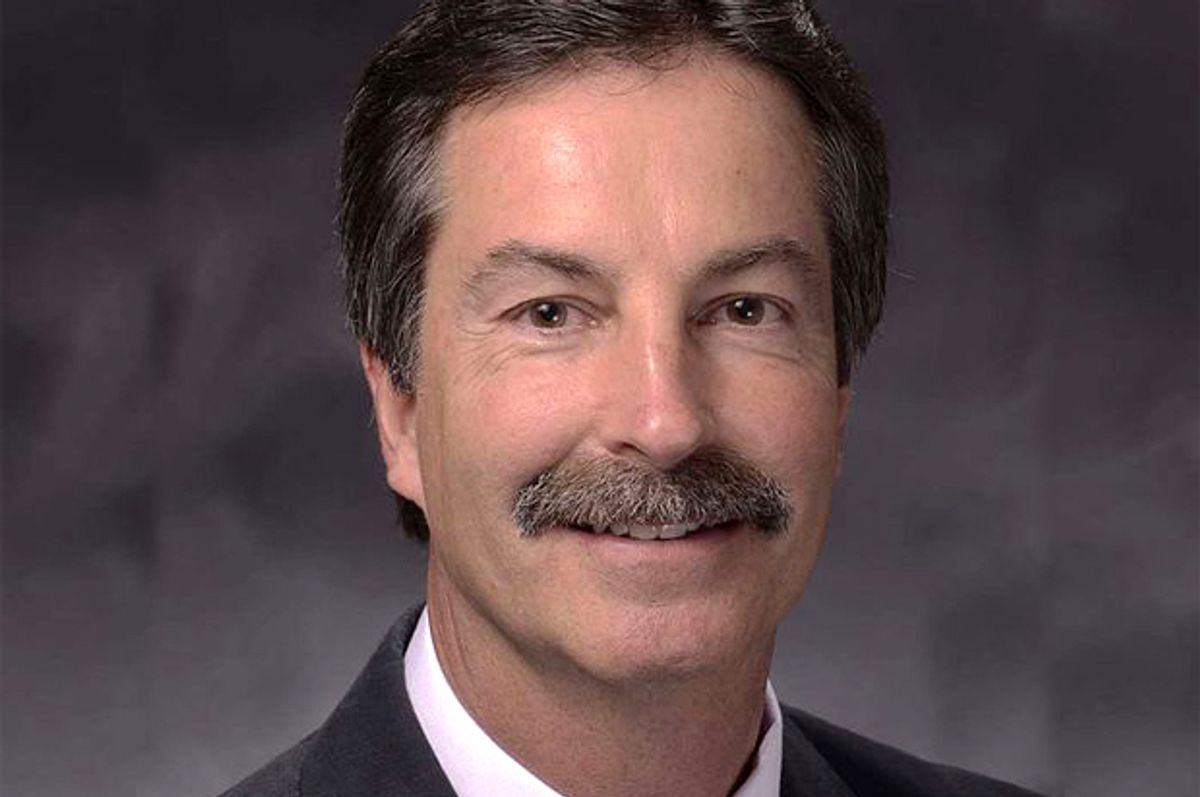 Last month, Republican Representative Mike Moon introduced the “All Lives Matter Act” in the Missouri State House, a redundant and trollish piece of legislation meant to further a derisive and dismissive term used to undermine a legitimate national protest movement that arose from the Missouri politician's own backyard.

The legislation has been moving through the Missouri House since its 2016 session began last week. Missouri already has a "personhood" law in place, but this bill would make the provision more extreme by repealing part of the law that says that the state "personhood" law must still comply with the US Constitution and Supreme Court precedent such as Roe v. Wade, the landmark case that legalized abortion.

Without such a caveat, this "personhood" bill would virtually wipe out abortion access—and likely be found unconstitutional. In general, "personhood" bills can also restrict some methods of contraception because both the morning-after pill and IUDs can prevent an already-fertilized egg—a zygote that is considered a "person"—from implanting in the uterus.

And as Vox's Emily Crockett points out, it was this very "language that saved the original fetal personhood law from being struck down by the Supreme Court in the first place."

As it stands now, women seeking abortions in Missouri already have a whole host of hoops they must jump through to gain access to their constitutionally protected right and a raft of burdens imposed upon them by the conservative state legislature. The state imposes a mandatory 72-hour waiting period for access to an abortion. Doctors aren't allowed to provide abortions in Missouri unless they obtain admitting privileges at a nearby hospital. And with such burdensome regulations, the state -- for all practical purposes -- now only has one operating clinic that performs abortions, leaving women in the state to have to travel an average of 125 miles each way to find a provider. Moon, a Tea Party member, has even publicly called for the shuttering of the state's final remaining abortion provider.

Rep. Moon has a long history of targeting marginalized groups and his latest bill merely fuses his disdain for Missourians practicing their protected right of protest with his anti-abortion zealotry. As NARAL Pro-Choice Missouri interim director Alison Dreith explained in a column decrying HB1794 for the St. Louis American, "Rep. Moon also cosponsored legislation for 2016 requiring all public restrooms, other than single-occupancy restrooms, to be gender-divided – an attack on transgender persons."

Drieth further explained: "Moon also called for a special legislative session on the Syrian Refugee crisis to halt "the potential Islamization of Missouri." So, Muslim and refugee lives also do not matter to him." Drieth also pointed out that Moon's legislation was introduced on the same day another Republican sponsored bill that proposed to strip any University of Missouri student athlete of all scholarships if he/she refused to play a game as part of a protest was introduced -- a direct response to the show of solidarity by the Mizzou football team last fall. That bill was eventually withdrawn after widespread outrage.

Black women are specifically targeted in the “All Lives Matter Act” in an effort to underscore and undermine the legitimacy of the movement for Black lives. The Ferguson Uprising was full of Black women who boldly exercised autonomy over their bodies by taking to the streets in protest. In opposition, the “All Lives Matter Act” attempts to restrict the rights and bodily autonomy of these same women. Moon delegitimizes the Black women who served as a catalyst for the resurgence and revitalization of the Black liberation struggle in the United States by suggesting they’re incapable of making well-informed decisions for themselves and those they care for, and invoking tired tropes of “welfare queens.” The “All Lives Matter Act” aims to diminish the agency that Black women are able to exert over their own bodies.

Moon's "All Lives Matter" bill, one can only hope, like his ridiculous proposal to impeach Missouri Governor Jay Nixon in 2014, will likely go nowhere but as Teddy Wilson of RH Reality Check noted, Missouri Republicans have introduced at least nine extreme anti-abortion measures this legislative session.

“Missouri has always been at the forefront of imposing restriction on abortion,” president and CEO of Planned Parenthood of Kansas and Mid-Missouri Laura McQuade told RH Reality Check.