Obama's hypocrisy: He said blame Wall Street, not food stamps — but he bailed out bankers and cut help for the hungry

Why didn't Obama listen to his own advice? His State of the Union rhetoric directly contradicts his policies. 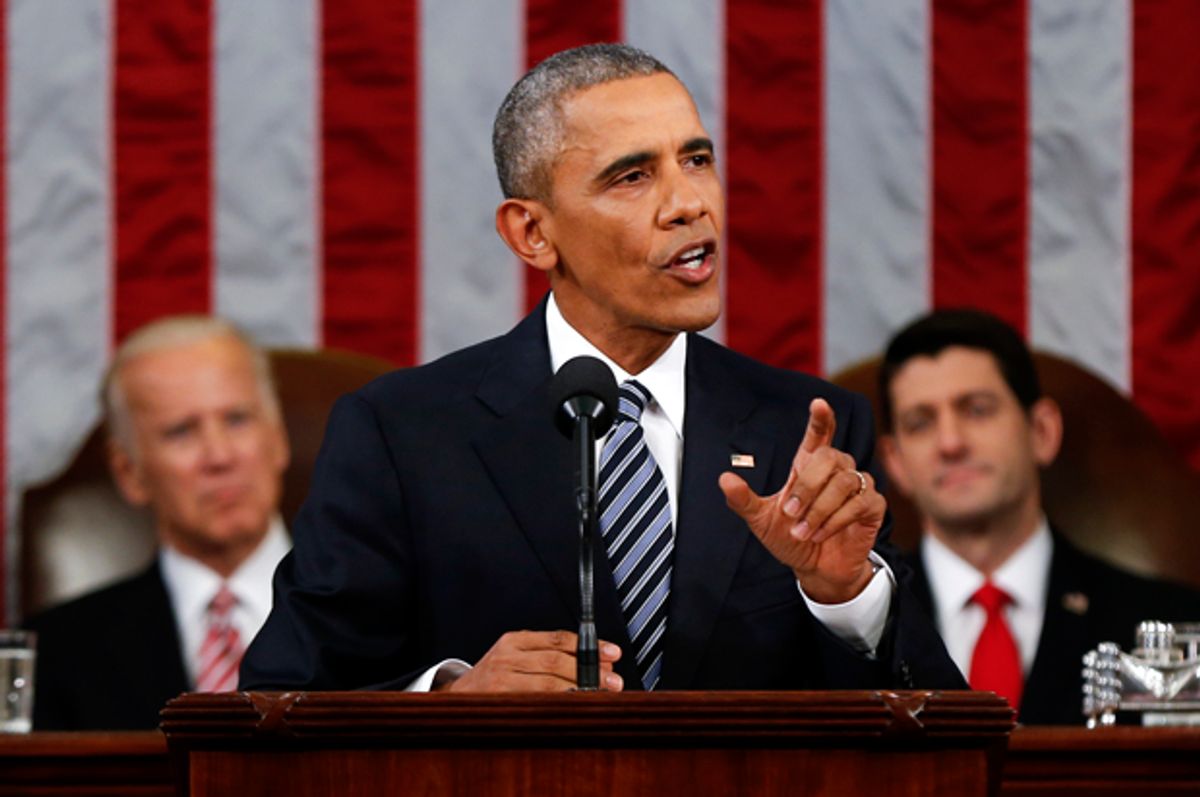 "Food stamp recipients didn't cause the financial crisis; recklessness on Wall Street did," Obama declared in his final State of the Union address.

There is a problem with this, however: Obama cut food stamps and bailed out Wall Street, punishing none of the people he readily admits caused the crisis.

In February 2014, Obama signed a bill that would cut food stamps by $8.7 billion over the next 10 years. The legislation was estimated to cause 850,000 households to lose an average of $90 per month, while poverty and hunger are on the rise -- even though they are already at disproportionately high levels compared to other OECD countries.

The cut was part of the omnibus 2014 Farm Bill. Just before signing legislation that reduced social services for the poor, MSNBC reported that "President Obama praised it as an example of bipartisan problem-solving that would help create jobs and move the American economy forward."

Seeking to tap into populist sentiment, Obama may now acknowledge that Wall Street was responsible for the 2008 financial crisis, but, back in 2008 -- you know, when it really mattered -- he bailed out Wall Street, and let the corporate culprits off scot-free, with piles of working-class Americans' money in their already bulging pockets.

Citing its "Too Big to Fail" policy, the Obama administration rewarded Wall Street for crashing the economy, at the sum of a whopping $700 billion tax dollars.

Meanwhile, no one was punished. As of 2013, five years after the crisis, not one top Wall Street executive was convicted of related criminal charges.

After punishing no one for the crisis, former Attorney General Eric Holder -- who was nominated by Obama himself -- returned to Wall Street to lobby on behalf of the very same big banks that caused the crisis.

Washington Post hagiography waxed poetic on the "Obama-Holder friendship at the heart of their successful partnership" (although it later scrapped "successful," nixing it from the headline) and noted that, "Unlike most Cabinet members, Holder developed a close personal friendship with Obama." This is practically a textbook example of corruption.

What did Wall Street do with American taxpayers' bailout money? Did it help the U.S. economy recover and grow? Of course not! Wall Street rewarded its own bank executives with billions of dollars worth of fat bonuses.

That is to say, under Obama's watch, working-class Americans bailed out Wall Street, on their dime, and paid the very same corporate elites who were responsible for the crash enormous bonuses.

In his last SOTU address, nevertheless, Obama stood by his policies, insisting they helped Americans.

The Obama administration's "federal rescue of Wall Street didn't fix the economy — it created a permanent bailout state based on a Ponzi-like confidence scheme," Taibbi wrote. The economy may have an illusion of stability now, he warns, but it is just that — an illusion — and is bound to collapse again.

We were told the bailout prevented another Great Depression and saved the U.S. economy. In reality, Taibbi continued, "It was all a lie — one of the biggest and most elaborate falsehoods ever sold to the American people... committing American taxpayers to permanent, blind support of an ungovernable, unregulatable, hyperconcentrated new financial system that exacerbates the greed and inequality that caused the crash, and forces Wall Street banks like Goldman Sachs and Citigroup to increase risk rather than reduce it."

Still today, justice is elusive, social services like food stamps are constantly on the chopping block, and Wall Street has returned to its destructive behavior, with complete impunity.

Obama's rhetoric directly contradicts his policies. Why didn't he listen to his own advice?