State of the Union: Obama rebukes GOP demagogues while making broad defense of his presidency

In his final State of the Union address, Obama touts seven years of achievements made in arduous circumstances 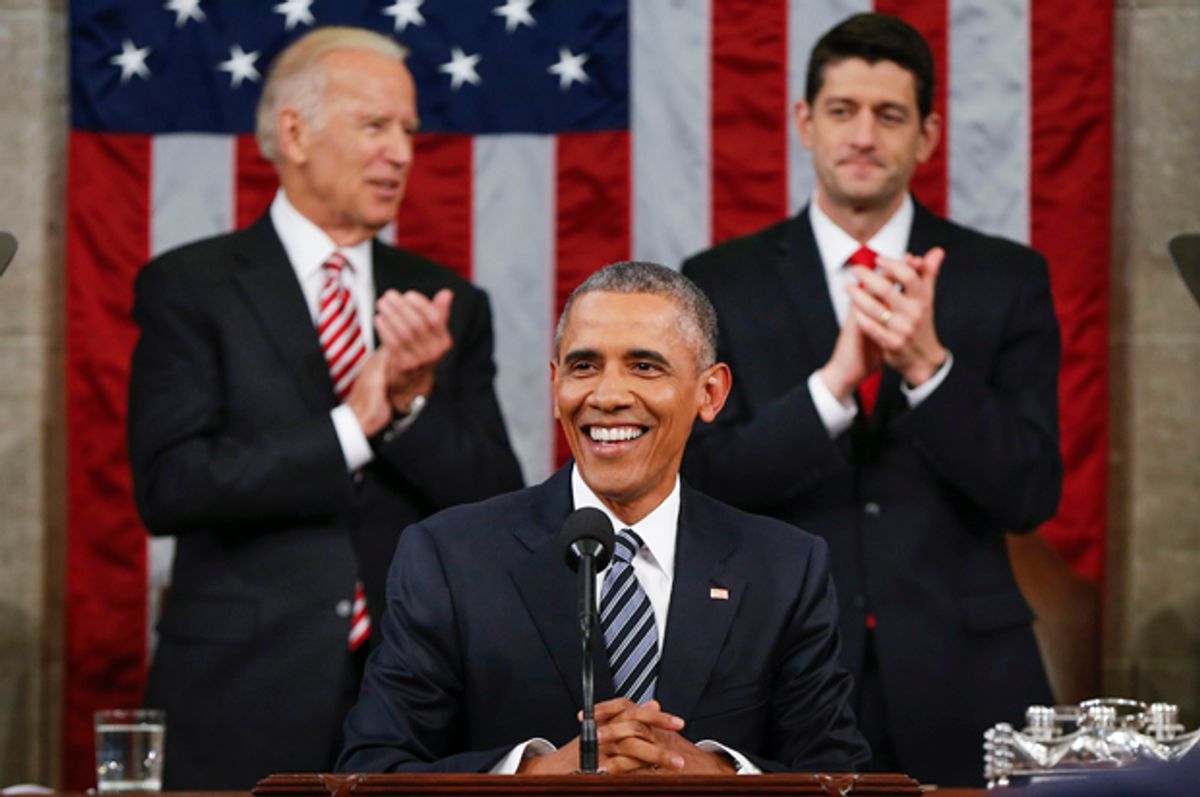 President Barack Obama delivered his final State of the Union address before Congress tonight. The speech was an opportunity for the president to defend his record and to make the case that America is better off today than when he took office. It was also about the future, about life after his presidency. “I don’t want to talk just about the next year,” he said, “I want to focus on the next five years, 10 years, and beyond.”

Obama began by highlighting his achievements in the face of difficult circumstances:

“Let me start with the economy, and a basic fact: the United States of America, right now, has the strongest, most durable economy in the world. We’re in the middle of the longest streak of private-sector job creation in history. More than 14 million new jobs; the strongest two years of job growth since the 90s; an unemployment rate cut in half. Our auto industry just had its best year ever. Manufacturing has created nearly 900,000 new jobs in the past six years. And we’ve done all this while cutting our deficits by almost three-quarters.”

This was a direct shot at the Republican demagogues who insist Obama has unilaterally destroyed America. “Anyone claiming that America’s economy is in decline,” Obama added, “is peddling a fiction. What is true – and the reason that a lot of Americans feel anxious – is that the economy has been changing in profound ways, changes that started long before the Great Recession hit.”

The president also refuted the right-wing trope (popularized by gas bags like Donald Trump) that America has become timid and feckless:

“I told you earlier all the talk of America’s economic decline is political hot hair. Well, so is all the rhetoric you hear about our enemies getting stronger and America getting weaker. The United States of America is the most powerful nation on Earth. Period. It’s not even close. We spend more on our military than the next eight nations combined. Our troops are the finest fighting force in the history of the world. No nation dares to attack us or our allies because they know that’s the path to ruin.”

This is true, of course, as is Obama’s broader defense of his presidency. It’s easy to forget – as the Republicans have – how bad things were when Obama entered office. The Great Recession was underway; we were mired in two unwinnable wars (one of which was completely unnecessary); we were hemorrhaging 700,000 jobs a month; and the Dow Jones Industrial Average had slumped to 7,949.09. Given those realities, Obama’s record is more than defensible.

It’s true that the president failed to deliver on all of his promises. He didn’t transcend the petty partisanship; he didn’t end the wars as swiftly as many wanted; he didn’t close Guantanamo; he didn’t end the torture program; he didn’t win every battle with Congress; he didn’t fix the gun problem (which may be unfixable); and he didn’t rein in the reckless banks. But not all of that is his fault.

There are limits on what the president can accomplish in our system. Obama faced the most obstructionist Congress in history, and no judgment of his presidency is complete without accounting for this. Senate Majority Leader Mitch McConnell said in 2012 that the GOP’s “top political priority over the next two years should be to deny President Obama a second term,” and that’s how Congressional Republicans behaved. Against such recalcitrance, it’s remarkable that Obama achieved what he did.

The president closed with a clarion call of sorts. We have to “fix our politics,” he said. He emphasized the need for bipartisanship:

“A better politics doesn’t mean we have to agree on everything. This is a big country, with different regions and attitudes and interests…Our Founders distributed power between states and branches of government, and expected us to argue, just as they did, over the size and shape of government, over commerce and foreign relations, over the meaning of liberty and the imperatives of security. But democracy does require basic bonds of trust between its citizens. It doesn’t work if we think the people who disagree with us are all motivated by malice, or that our political opponents are unpatriotic. Democracy grinds to a halt without a willingness to compromise.”

In one of the more honest moments of the night, Obama added that “It’s one of the few regrets of my presidency – that the rancor and suspicion between the parties has gotten worse instead of better.” Obama can’t say it, so I will (again): the rancor and division in Washington isn’t his fault. The GOP decided, as a matter of strategy, to oppose everything he does, and that’s what they’ve done.

Obama concluded with a series of platitudes about America’s American-ness, as all presidents do in these speeches. The “State of our Union is strong,” of course, but there’s much to be done. There wasn’t a clear sense of the president’s agenda in 2016, but it’s pretty clear he plans to continue reaching across the aisle. I doubt the Republicans will respond in kind, but we’ll find out soon enough.