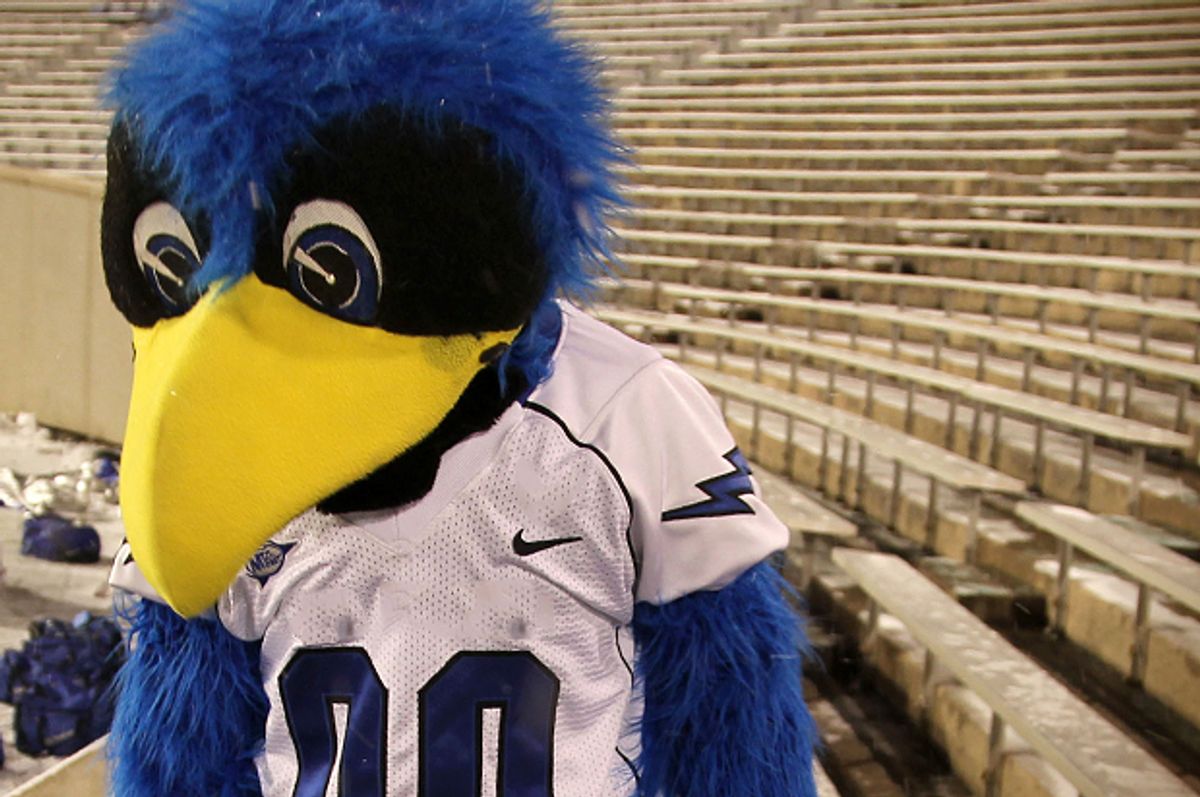 Sorry, sports fans. A Wisconsin high school has just rewritten the rules on how to behave in the stands.

As Sports Illustrated reports, the Wisconsin Interscholastic Athletic Association has lately adopted a pretty heavy-handed approach to good sportsmanship. It first came to light last week, after Hilbert High School basketball player April Gehl became the subject of international headlines when she tweeted out a screenshot of a "message from the WIAA" regarding "unsporting behavior." She had accompanied it with her uncensored invitation to "EAT S_IT WIAA." For her unfiltered feedback, Gehl promptly earned the attention of the WIAA — and a five game suspension. Gehl, one of the top scorers for her team and an honor student, told the Post-Crescent Wednesday, "I couldn’t believe it. I was like, 'Really? For tweeting my opinion?' I thought it was ridiculous." And Hilbert athletic director Stan Diedrich confirmed, "The WIAA contacted me with information. Once given the information, we dealt with the matter in accordance with board policy."

Gehl's mother says that "the school policy includes a section on inappropriate language," so they're not contesting the suspension. And Gehl herself now admits now she regrets her word choice, but she also says she won't delete the tweet because she "was already punished for it." Sounds like she's still holding on to the basic sentiment — and that she's probably not be the only one.

In an email to state high school officials that went out last month, the WIAA director of communications Todd Clark said that "We want to address concerns with a noticeable increase in the amount of chants by student sections directed at opponents and/or opponents’ supporters that are clearly intended to taunt or disrespect. Not wanting to restrict creativity or enjoyment, an enthusiastic and boisterous display of support for a school’s team is welcomed and encouraged at interscholastic events when directed in a positive manner. However, any action directed at opposing teams or their spectators with the intent to taunt, disrespect, distract or entice an unsporting behavior in response in not acceptable sportsmanship."

He went on to suggest "some specific examples of unsporting behavior by student groups including chants directed at opposing participants and/or fans. Among the chants that have been heard at recent high school sporting events are: 'You can’t do that,' 'Fundamentals,' 'Air ball,' 'There’s a net there,' 'Sieve,' 'We can’t hear you,' The 'scoreboard' cheer, and 'Season’s over' during tournament series play."

If you're talking about school chants that glorify sexual abuse, or racist chants against individual players in a match, or sexist crap aimed at females on the field, or gestures like the Tomahawk Chop that have an ugly legacy of cultural ignorance, hey, ditch away. There's nothing sporting about being hateful and intimidating. But part of cheering for your team to win does tend to include expressing the desire for the other team to lose. Psyching out the opposition is part of the experience. That's not unsporting. That's just… sports. As SI points out, "In what state is a 16-year-old kid yelling 'Airrrrr-ballllll' considered something that’s so disrespectful it needs to be banned? How is reminding the other team that you need to improve your fundamentals a bad thing? Who even chants 'There’s a net there' anyway?" And if the WIAA wants to know what people who've ever attended a sporting event think of its policy, I think the phrase we're looking for here is BOOOOOOOO.