The dark side of David Bowie: As the mourning goes on, we can't ignore his history with underaged groupies in '70s 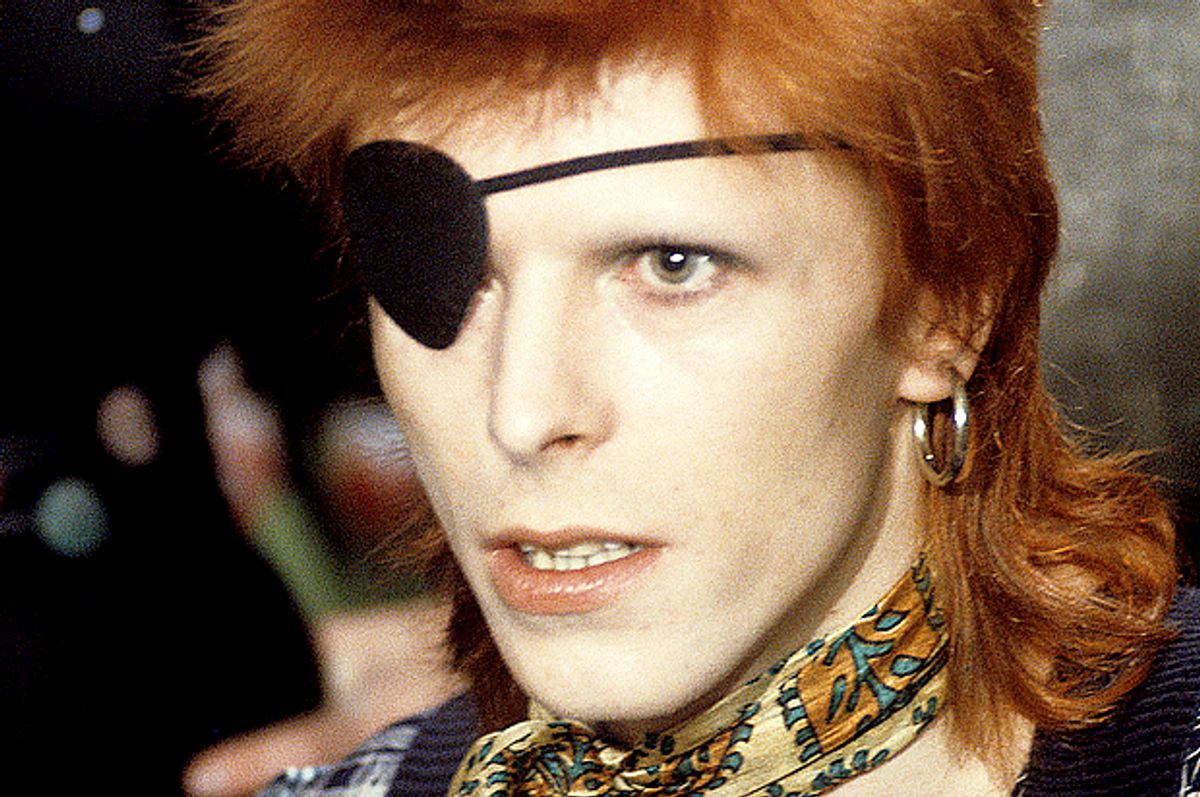 After David Bowie’s death took us all by surprise Monday, the tributes overwhelmed. Social media feeds were filled, almost unanimously, with videos and links and memes praising the influential artist who seems to possess near-universal appeal — he made enough hits to feel populist, and yet remained sufficiently influential to exist on a forever-cool plane with his scant handful of equals.

But in between the “Labyrinth” GIFs, the retrospectives and moving tributes to his style and gender performance, a quiet pushback began online, too. Don’t forget this part of the story, the messages suggested, with links to this earlier interview shared: “I lost my virginity to David Bowie: Confessions of a ‘70s groupie,” in which Lori Mattix (her name has historically also been spelled "Maddox" in press accounts) recounts her teenage days in the Los Angeles rock scene. Mattix had, in her own words, consensual sex with not only Bowie — at age 15 — but with Jimmy Page and Mick Jagger as well.

THRILLIST: Still, a lot of people would have a hard time with an underage girl having sex with rock stars

"But you need to understand that I didn’t think of myself as underage. I was a model. I was in love. That time of my life was so much fun. It was a period in which everything seemed possible. There was no AIDS and the potential consequences seemed to be light. Nobody was afraid of winding up on YouTube or TMZ. Now people are terrified. You can’t even walk out your door without being photographed. It has become a different world.”

Mattix's narrative is troubling to read in the sober light of 2016. A girl loses her virginity to a man in a hotel room, and that same night has her first threesome with him and another teenage friend as well. There are drugs and alcohol everywhere. There is David Bowie’s wife, Angie, banging on the door the next morning. There is the girl’s mother, indifferent when she’s not overtly approving of the conquests; her father, deceased. There is David Bowie’s face Monday all over the Internet, fans moved to tears over his death. There is scant, if any, mention of that girl in those moving tributes. There is, even in 2016, the question of how appropriate it is to talk about her at all.

I believe Mattix when she says that she felt special in the company of these glamorous, powerful men, happy to let them decide how and when she’d have sex and with whom. At 15, at 16, at 17. Not because I agree — most people grow out of the idea that sex with a rock star is a goal to pursue — but because when you’re young it’s easy to believe that experience is the one currency you’re allowed to hoard and never pay out. Because it’s alluring to believe a woman is made from her chosen experiences, and aren’t you already a woman at 14, at 15? Doesn’t the world, goddamn it, let you know that every day? Our culture, too, makes it easy to simply accept Mattix was a girl who decided she knew what she wanted, and to let it go at that.

And wasn’t it, as she says, “a different world”? Oh, the ‘70s. Things were different then. But they were not, really, no matter how many times we all collectively wish that to be true. If you can say with a straight face “men don’t have sex with young girls anymore” — well, good luck to you with that. What changes is this, only — which girls, which men, how and where it is allowed. What is more appropriate than making sure we don’t forget this, ever, even at inconvenient times?

Girls, of course, are convenient (until they aren’t). Boys, too. There are always more where they came from. So, it must be said, are rock stars. And filmmakers and actors and comedians. And choir directors and coaches and neighbors and dealers and family friends who take an interest.

Mattix, for her part, kind of agrees:

“But, I should add, things haven’t really changed. Look at the Kylie and Kendall Jenners, the Gigi Hadids. They are the modern-day versions of teenage groupies. The only difference is that the Internet blows them up in a way that allows them to make a fortune. And then there’s Lindsay Lohan, Paris Hilton, and all those kids who were fucking partying at 15. It is just a different era. It has evolved into something else.”

I believe Mattix when she says the sex with her rock star partners was consensual on her behalf, and I also believe David Bowie and the others committed acts that are exploitative, and illegal for good reason. Age 15 is young, no matter what, and they were the adults with all the power in this dynamic, and that is not what healthy, normal sexual relationships for teenagers look like. I also believe it’s important to say this is different from the horrific decades worth of rape allegations brought forth against Bill Cosby, and different from Roman Polanski’s rape of a drugged girl. It is not the same as the lawsuits against R. Kelly over his alleged sexual abuse of young girls, though the conditions that made all of these stories possible stem from the same terrible old root: powerful men, young women, and a whole lot of people who looked the other way — or in the case of these teen groupies, even romanticized the tales. Say, wasn’t “Almost Famous” great?

Does even talking about the story, now that he has died, taint Bowie’s legacy, as some fear? What is any true legacy but complicated? If we feel guilty for talking about it, maybe we should explore where that guilt really comes from.

I can believe that David Bowie might not have believed he violated anyone by having sex with Lori Mattix and whoever else, though of course I don’t know his (or, for that matter, Jimmy Page’s or Mick Jagger’s) heart, or even whether these events transpired at all the way Mattix says they did, although the tales have been out there long enough to be read as a generally accepted narrative of the times. It is not hard to believe Bowie likely understood at the time — without even having to acknowledge it — that he was simply availing himself of the sensory perks of his station. How was a girl any different from good dope, the best table, a forgiven room service bill? They were an indulgence to finally grow out of, perhaps, like cocaine and cheeseburgers. This is a delusion, of course, and not one that we have to tacitly co-sign with silence, but a delusion that didn’t begin and end with him alone.

And it would seem as though she believes the same — she was availing herself of the pleasures available to her at the time, and she made her own decisions willingly and enjoyed herself with no major regrets. Should we demand she represent her experience any other way? If what we do is believe women, should we believe her?

It is possible to believe her and to know objectively that it was wrong anyway, and to say so. Not for her or for Bowie, necessarily, but for other girls now who are absorbing how we talk about these stories, and all the girls yet to come.

Not only is it possible, it’s not even difficult to hold these two conflicting ideas in mind at the same time: A sensitive genius capable of soothing our misunderstood selves from afar can be incapable of summoning sufficient humanity in the moment to decide that a 15-year-old girl right in front of him is not a well-earned reward. Bowie was not a man who fell to earth — just another lousy human like the rest of us, and one we fashioned into a well-compensated man who consumed what he wanted and left the rest and maybe felt OK about that or maybe didn’t, and now it’s too late to say.

What there is still time to say is it that yes, it was a wrong thing for him to do, a thing men shouldn’t do, not then and not ever, a thing we should speak up louder about even when it is personally or professionally uncomfortable to raise a voice against an artistic hero, or for that matter, anyone. Because what we're left with, in addition to his formidable and beloved body of work, is this story, and how we tell the story can shape how the next story plays out. Because there will always be more where he came from, and more girls raised to believe that it’s on her in the end, that her experience is both the bill he is always forgiven and the only currency that can settle it.