Despite the NYT's flawed story, the writer-director of Will Smith’s football exposé made no deals with the NFL 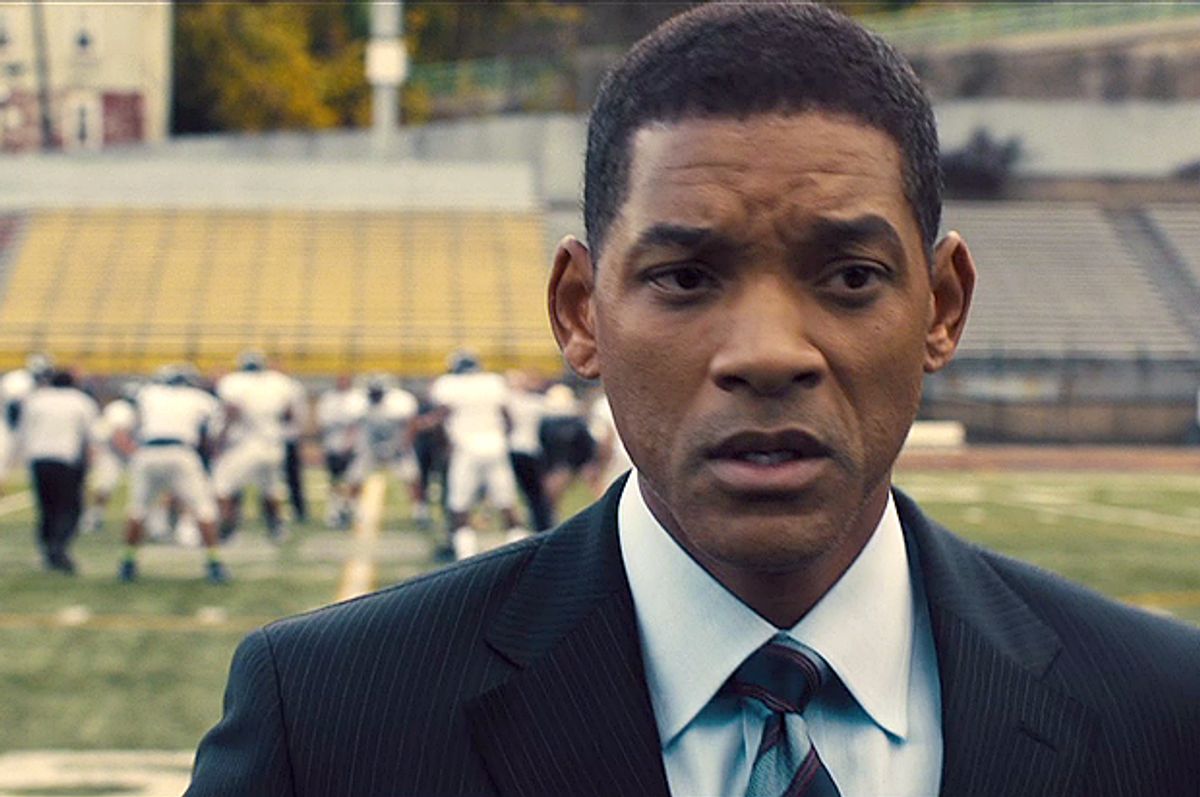 Months before the movie “Concussion” was released – indeed, before anyone outside the film’s production team and a few Sony executives had seen it – the New York Times published an article suggesting that leaked Sony documents indicated that writer and director Peter Landesman had softened his depiction of the National Football League and its response to the brain-injury crisis in America’s biggest professional sport. This wasn’t the Gray Lady’s only embarrassing misstep of 2015, nor was it the only time the Times apparently got played by unnamed and unreliable sources who may have been pushing a hidden agenda. Maybe it’s not as dire to mischaracterize a Hollywood movie as to suggest that the San Bernardino shooters had pledged themselves to ISIS in social media post and law enforcement had missed it, but both failures are symptoms of the same disease.

Ironically enough, Landesman had an extensive career in investigative journalism before turning to movies, and has written for the Times on several occasions. Was this experience strange or anomalous? Unfortunately not, he told me during a recent phone interview. “You know what? I was written about unfairly and inaccurately when I was a journalist,” he says. “It’s a real problem with journalism today, with the speed of the news cycle and the absence of quality control. Reporters often publish things based on a very limited understanding of the facts. You can’t blame that on the Internet, but it may have made the problem worse. Having said that, that Times article was ethically challenged in a big way. How do you take issue with a film you haven’t seen? I don’t understand how or why they decided to publish that.”

There are legitimate criticisms to raise when it comes to “Concussion,” which I would describe in large part as a conventional inspirational biopic built around a well-loved star. Indeed, it’s a classic story of the Everyman who takes on the establishment, “Mr. Smith Goes to Washington” with Mr. Smith as a squeaky-clean evangelical Christian doctor from Africa who holds conversations with corpses, and Washington as the NFL's massive sports marketing empire. (At the risk of being obvious, this film is definitely not Stacie Passon’s 2013 indie of the same title, which is about a married lesbian who becomes a prostitute.)

One thing “Concussion” absolutely does not do is let the NFL or the sport of football off the hook. Will Smith plays Dr. Bennet Omalu, a Nigerian-born pathologist who may, as various people observe in the film, have been the only person in Pittsburgh who had never heard of Mike Webster, the Hall of Fame center for the Steelers who died in 2002, homeless and apparently psychotic. What most Steelers fans saw as an inexplicable tragedy, Omalu saw as a medical mystery: He could find no obvious explanation for Webster’s constellation of symptoms, nor any reason why an apparently healthy 50-year-old man should suffer severe dementia and drink himself to death in his pickup truck.

Omalu’s autopsy of Webster’s brain tissue and his subsequent research ultimately led to a new diagnosis that has become familiar to even casual readers of the sports page: Chronic traumatic encephalopathy or CTE, a devastating brain injury resulting from repeated blows to the head. As Landesman puts it, the NFL reacted “pretty much the way any large corporate entity would when an industry worth millions or billions is at stake.” As “Concussion” makes clear, the league repeatedly tried to suppress Omalu’s findings, depicting him as a foreign-educated quack with dubious scientific credentials and an anti-American agenda. He was harassed at home by football fans (“Are you trying to 'vaginize' our game?”) and derided by current and former NFL players, including legendary Chicago Bears safety Dave Duerson (Adewale Akinnuoye-Agbaje), who would later commit suicide after suffering CTE-related dementia.

Omalu may have come from a nation many Americans associate with scam emails and extremist groups, but he had multiple advanced degrees and an extensive background in both research and clinical practice. He knew he was right, and he wasn’t alone. Prominent neurologists and medical officials began to understand that he had confirmed something that hadn’t been more than a hunch: American-style football, the only major sport in which a player’s head is routinely used as a weapon, had catastrophic health consequences that went far beyond broken bones and arthritic joints. In the film, Alec Baldwin plays a longtime Steelers team doctor who comes to Omalu and spills the beans: Many NFL insiders already understood that concussions and head injuries posed a grave risk, but this was never discussed in public.

“Concussion” may be told in conventional three-act fashion — characters, then crisis and then resolution — but it also reflects Landesman’s background in sticking very close to the facts of Omalu’s story and the unfolding issue of brain injury in the NFL.

“I don’t actually see that much difference between telling stories in journalism and telling them on film,” he says. “The tools are very different, but the basic idea is the same. As a journalist, as a screenwriter and as a director, I’m trying to tell compelling and truthful stories. Sometimes in a fictional story you can be more honest and truthful, actually. As a journalist you’re a prisoner of the data, in effect. You have to tell the story with evidence you can verify. In a dramatic story you have much more flexibility to approach the truth with a whole range of different instruments.”

In the screenplay for “Concussion,” for example, Landesman felt at liberty to invent conversations long after the fact that could not be documented, or to compress multiple events into a few illustrative examples. He did not, he says, pursue the tactic of Chris Terrio’s Oscar-winning screenplay for “Argo,” which took the true story of the Iranian hostage and fictionalized it extensively. “Those are very different cases,” Landesman says. “I happen to know that film has a very limited relationship to what really happened. I can assure you that is not the case here.”

As for his interactions with the NFL while making the film, Landesman says there were virtually none. “We set up a meeting at the NFL’s offices, and I simply decided not to go. That was the journalist in me, looking to be fair and to hear statements from all sides. What I realized was that the only agenda I would be serving at that meeting was theirs, and I didn’t need to do that. I understood how [the league] had responded to Dr. Omalu and the whole question [of brain injury]. The record was clear. I didn’t need their permission to use clips [from NFL games] or to tell the story. I simply couldn’t see any reason to do it.”

Does Landesman himself have some anti-American intellectual antipathy for football? Quite the opposite, he says. “I played football the whole time I was growing up, and through two years of college. I think it’s a beautiful game in many respects, one that allows you to follow a player from boyhood through manhood. Unfortunately, it has one very big problem. I mourn it, in many ways.”

Wait: What does he mourn? NFL games continue to dominate the TV ratings, and are increasingly popular overseas, where almost no one plays the sport. Despite a wave of bad publicity around the CTE revelations and a $1 billion financial settlement with thousands of former players that has not quite put the issue to rest, the NFL remains an immensely profitable enterprise. But the true legacy of Bennet Omalu and the CTE discovery, Landesman says, still lies in the future.

“It took a long time, but the NFL has now responded to this issue about as well as it can,” he says. “They are much more vigilant and cautious about head injuries. Players with likely concussions are not allowed back into games, and have to sit out until their symptoms have cleared. Those are big and important changes.” But most physicians and scientists would agree that the true scale of CTE-related injuries and illnesses among football players is not yet known. Does it encompass only linemen and star defensive players like Duerson and San Diego Chargers linebacker Junior Seau, another CTE suicide? Does it affect most former players? Is it nearly all of them?

Those are the questions that haunt the future of football, Landesman says, and for all its audience-friendly storytelling and star charisma, “Concussion” makes that clear. “Enrollment in Pop Warner [youth] football is down something like 35 percent since Dr. Omalu’s research findings began to come out,” he says. “Which means that talented, athletic kids all over the country are playing something else, whether that’s soccer or basketball or tennis. So the first question for the NFL is what their talent pool will look like in 15 years. And the second question is whether, as we learn more about the extent of this issue, they can do anything to save the sport. I’m really not sure whether they can.”

I ended the conversation by telling Landesman that I had already told my 11-year-old son he was never playing organized football. This was no big deal, in all honesty: I barely lasted half a season in Pop Warner at his age, and he’s much less interested in sports than I was. But for a genuine former jock, a guy who actually played NCAA football … Landesman interrupts me before I could ask the question. “Absolutely not,” he says. “I have a kid exactly that age, and my response is not just 'No' but 'No way in hell.' Not unless they change the sport in some way that’s nearly impossible to imagine. Magnify those individual decisions by the thousands, or the millions, and you have to say that football has a big problem.”