A pariah in his own party: Republican insiders want Jeb to drop out for the sake of the GOP

Party elites are losing their patience with Jeb and how he's hurting their top establishment candidate, Marco Rubio 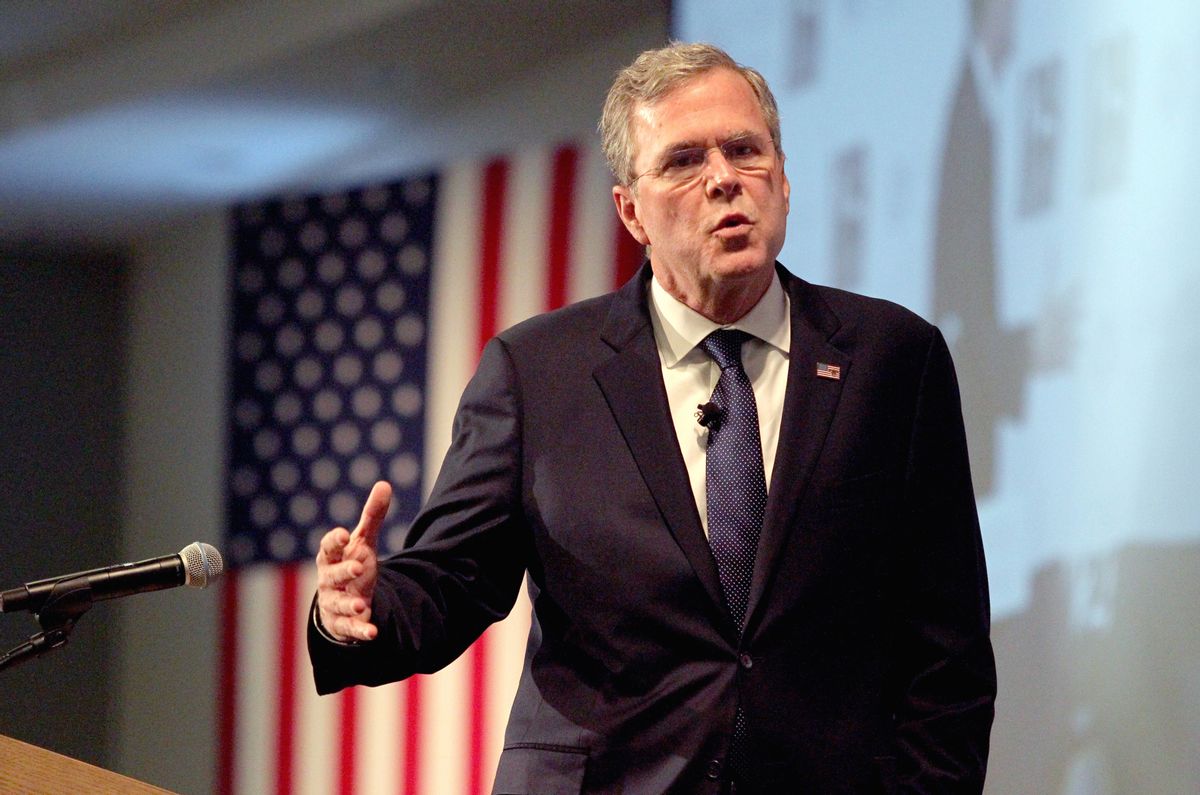 Jeb Bush's campaign has been cratering for several months. It's no longer newsworthy to point out how badly he's performing in the polls or how alarmed donors are by his feckless campaigning. It's been fascinating to watch his descent, though. The early establishment favorite, Jeb has become a pariah in his own party. He can't win, everyone knows it, and his presence in the race only adds to an already crowded field.

It appears party elites are finally losing their patience with Jeb. According to a Politico report, Republican operatives are concerned that Jeb's only contribution at this point is to undermine the candidate who has replaced him as the establishment choice, Marco Rubio.

Jeb isn't a threat, but he does have a lot of money. And his super PAC, Right to Rise, has the resources to flood the airwaves with anti-Rubio ads well beyond the early primary states (the PAC is already bashing Rubio in Iowa and New Hampshire over his stance on immigration). With Trump and Cruz rising in the polls, the GOP is increasingly desperate to unite around a mainstream candidate they believe can win a general election. Jeb isn't that guy, and Rubio has emerged as the logical alternative.

Hence Bush's campaign is seen more and more as a distraction and a gift to the so-called outsider candidates. Jeb believes he can still occupy the establishment lane of the party and win the nomination, but he's in the minority. To high-level Republicans, Bush has already lost and “his super PAC, with tens of millions of dollars left to spend, looks more like a wrecking ball meant to lay waste to the one contender many Bush donors see as the last remaining mainstream alternative to Trump or Cruz.”

Stuart Stevens, who ran Mitt Romney's 2012 campaign, put it bluntly: “This is something Jeb Bush has to decide. Does he want his legacy to be that he elected Donald Trump or Ted Cruz? He can't control that super PAC but he ought to call on the super PAC to stop attacking people with whom he mostly agrees...To stay in a race and spend millions and millions of dollars attacking other candidates you basically agree with, that starts to look like spite.”

An anonymous Bush supporter (who worked in both previous Bush administrations) agreed: “This thing has been mismanaged and screwed up since the beginning. It's gotten to the point where the old-timers are saying 'it's really sad.' How, as presumptive leader with $100 million in the bank, did you get yourself in a box where you have to attack Rubio and Christie to win your lane.”

Republican frustration with Jeb extends beyond the establishment as well. Curt Anderson, a GOP operative who ran Bobby Jindal's campaign last year, told Politico that “The chances of those ads hurting Rubio are a lot stonger than the odds of them helping Jeb.” Even Erick Erickson, the popular conservative blogger, called Bush's tactics “silly and embarrassing” and condemned him for attacking “a candidate who tried to get passed a policy Jeb Bush himself supported.”

There's little doubt that the GOP's only chance to win the general election is to consolidate support among establishment Republicans. A Trump or Cruz nomination would almost certainly result in losses up and down the ballot in 2016. This puts Jeb in a difficult position. He's not competing with Trump and Cruz for voters – he'll never win over that wing of the party.

Jeb's in a zero-sum contest with Rubio, Christie and Kasich. As long as he's running, he's running against these candidates. Unlike the others, however, Jeb has limitless funds, which means he can do more damage on his way out the door. I don't expect Bush to “suspend” his campaign any time soon, so the circular firing squad is likely to continue for the foreseeable future.

That's great news for Trump, Cruz and the Democratic Party.