Alan Rickman's unique charm: How he brought irresistibly charismatic villains and heroes with a twist of menace to life 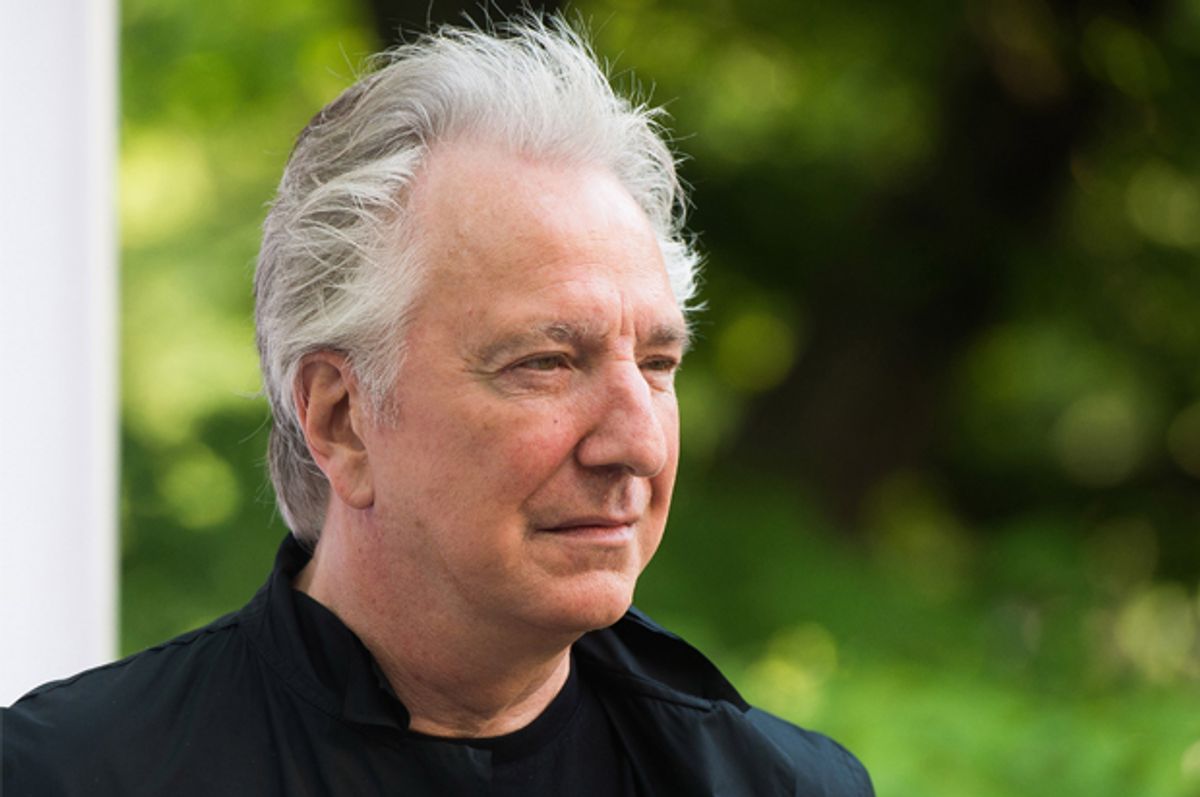 Some actors become indelible for their flawlessly everyman qualities — their ability to shine when playing the most ordinary of men. Alan Rickman — whose death from cancer was announced Thursday — was not such an actor. Whether he was playing a wizard or a terrorist or a straying husband or a dead cellist, he inevitably infused every role with his own formidable and irrepressible charisma. Watching him, you couldn't help thinking, we are not worthy.

I first saw Rickman back in the mid-eighties, when he played Achilles with future frequent costar Lindsay Duncan in the Royal Shakespeare Company's "Troilus and Cressida." The moment he walked on the stage, you could see a palpable leaning forward from the audience, a raising of opera glasses. He was at the time nearly forty years old and a relative unknown. He was also, unquestionably, a star. It didn't long for it to become official. The same year, he and Duncan originated the roles of Valmont and the Marquise de Merteuil on stage in "Les Liaisons Dangereuses," first in England and then on Broadway. Then, in 1988, he made his indelible mark as Hans Gruber -- one of best bad guys in movie history -- in "Die Hard." It was in many ways a stock role, but he played it with such riveting menace, it catapulted him to fame.

But you know all that. You know that he went on to play the dreamy, deceased Jamie in 1990's charming "Truly, Madly, Deeply," thereby permanently setting the bar for "ideal man" at the "dead housemate" level. You watched him play a beguiled, disarmingly lovestruck Colonel Brandon in "Sense and Sensibility" with such blistering heartache that the only unconvincing aspect of the film was how Kate Winslet could ever be distracted for a moment by anyone else. You saw him go serious as Eamon de Valera in "Michael Collins" and absurd as a weary television actor mortified by his most famous role in "Galaxy Quest," moaning, "I won't say that stupid line one more time!" before self-loathingly doing just that. You were with him every step of Severus Snape's complicated, cryptic, ultimately devastating journey in the "Harry Potter" films. You watched him seduce with a tango in the Texas video for "In Demand." If you were lucky, you saw him on stage in his West End and Broadway roles. You know how he infused his villains with irresistible charm and his heroes with a twist of menace, and how he took that hypnotic voice of his and made every role — whether it was a paranoid android or Ronald Reagan — a fully realized character you cared about. And you know that just as impossible as it still is to fathom that Bowie is gone, he unfairly now is too.

But despite his undeniably impressive body of work and his legion of now grieving fans, perhaps what makes Rickman most unique among actors is what an outstanding costar he proved to be. He was not, despite his considerable acting chops and sex appeal, always the first to be on magazine covers, the one whose name alone could open a Hollywood film. Instead, he durably, reliably played well with others. He didn't need to take the spotlight all for himself; he blazed regardless of who he was standing with. On Facebook Thursday, Daniel Radcliffe praised him as "one of the loyalest and most supportive people I've ever met in the film industry… Contrary to some of the sterner (or downright scary) characters he played, Alan was extremely kind, generous, self-deprecating and funny."

When you've got his blend of talent and magnetism, you don't have to be so magnanimous. But watching him in role after role after role, over a span of thirty years, you see how, unfailingly, he was. You see how he made every single thing he was in better for his presence in it. And though he spent his whole career trying to break your heart, you know you still never really believed he'd do it like this, much too suddenly for the rest of us, and far too soon.