The violent contradictions of the Obama doctrine: How to plead for peace while bombing your enemies to hell

For all the talk of a more measured foreign policy, the president has continued to enforce a failed paradigm 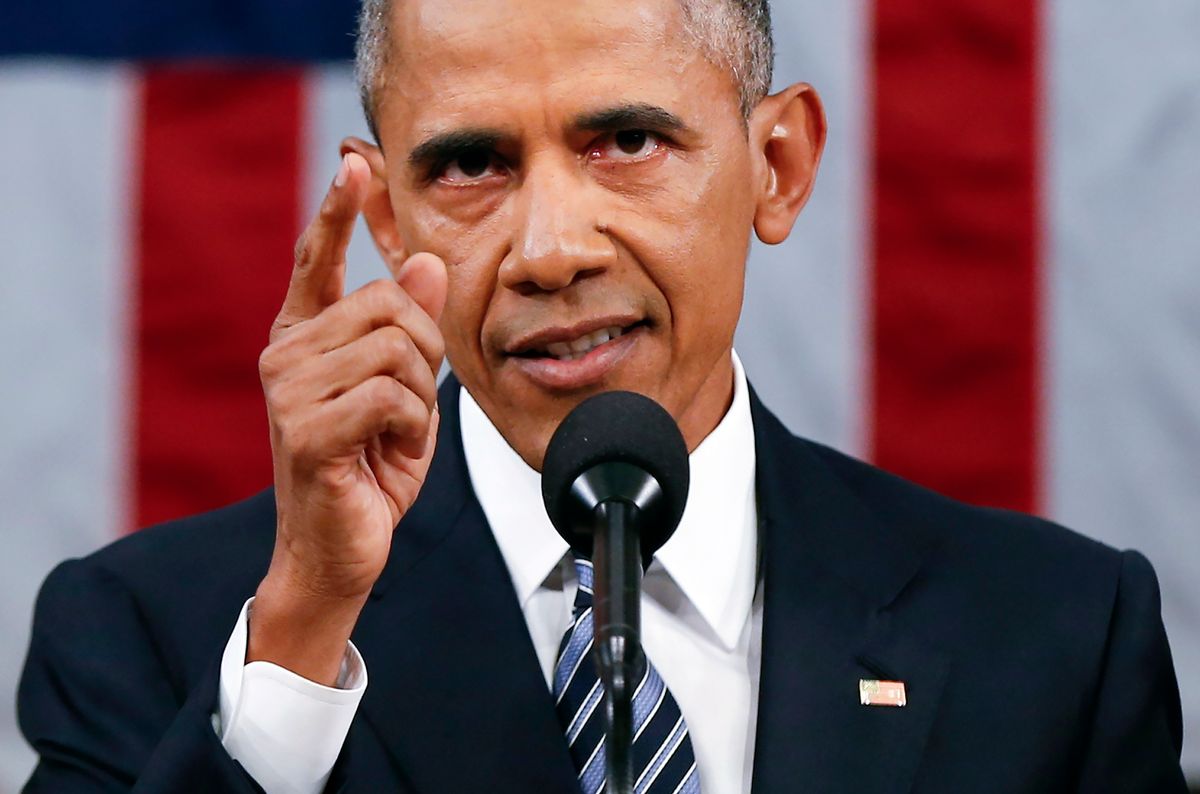 President Barack Obama delivers his State of the Union address before a joint session of Congress on Capitol Hill in Washington, Tuesday, Jan. 12, 2016. (AP/Evan Vucci, Pool)
--

Almost 50 paragraphs into his State of the Union address on Tuesday night, Barack Obama made the joke that formed half of his 2012 reelection message: "If you doubt America’s commitment -- or mine -- to see that justice is done, just ask Osama bin Laden." Thus the president boasted, again, of having killed the al-Qaida leader. He continued: "Ask the leader of al-Qaida in Yemen, who was taken out last year, or the perpetrator of the Benghazi attacks, who sits in a prison cell," listing the names of those his administration has killed or jailed. "When you come after Americans, we go after you," the president warned, almost as if he was repeating the "dead or alive" guarantee his predecessor made.

It was a brash statement, coming as it did amid other efforts to push back on Republican presidential candidates' inflammatory rhetoric. Obama notably scolded those politicians -- including but by no means limited to Donald Trump -- who attack Muslims: "When politicians insult Muslims ... when a mosque is vandalized, or a kid is called names, that doesn’t make us safer," the president insisted. "That’s not telling it like it is. It’s just wrong."

Obama also claimed that those who make "over-the-top claims" that our fight against ISIL "is World War III just play into their hands." He likewise mocked those who claim "masses of fighters on the back of pickup trucks ... threaten our national existence" and suggested, "We just need to call them what they are -- killers and fanatics who have to be rooted out, hunted down and destroyed."

Obama even got the Joint Chiefs to stand up and applaud his salute to our troops as "the finest fighting force in the history of the world"; this after they had remained seated and stone-faced through his claim that the U.S. "is the most powerful nation on Earth," and that it spends "more on our military than the next eight nations combined."

But after calling ISIL killers and fanatics, the president set off on his rising-crescendo ending with that tired quip, asking a dead OBL whether he's serious about terrorism. Having just said we shouldn't mythologize ISIL because that serves their propaganda purposes, Obama counted off the 10,000 airstrikes his administration has sent against these "killers and fanatics," even while he asked Congress to approve the considerable military force he was already using.

In a speech that otherwise catered far more than his previous State of the Union addresses to liberal domestic policies, the warmongering was stark.

Perhaps it had to be stark. Perhaps he had to show his ferocity to answer claims of weakness from Trump and the others (though he might just as easily have pointed out how many of the policies they demand have already been implemented).

The idea, apparently, was to make room for what pundits are increasingly identifying as Obama's doctrine, that, in his own words,

"America will always act, alone if necessary, to protect our people and our allies; but on issues of global concern, we will mobilize the world to work with us, and make sure other countries pull their own weight."

While pushing against the belligerence of the GOP candidates, Obama advocated for a more measured application of American leadership (and pretended that our coalition in Syria was bigger than it is in practice). But in the middle of it all, Obama also invoked the pope, who addressed Congress just months earlier: "[T]o imitate the hatred and violence of tyrants and murderers is the best way to take their place.”

It's as if the guy boasting of his 10,000 airstrikes and the killing of Osama bin Laden missed the full point of the pope's message, which also insisted: "Our efforts must aim at restoring hope, righting wrongs, maintaining commitments, and thus promoting the well-being of individuals and of peoples."

Obama is trying very hard to clear space from which to wage a more measured form of bombing. But even if he can, it's bombing nonetheless. It is still responding to murder with more killing, imitating the violence of murderers. That may all be necessary from a political perspective, particularly as we get deeper into election-year campaigning. But bombing Muslim countries for eight more years, even without troops on the ground, hasn't proven all that much more effective than claiming we're in a world war against Muslims as a religion.