HBO's upscale "Sesame Street": Why Elmo and Grover in the land of "Girls" and "Game of Thrones" makes perfect sense

We love to think of "Sesame Street" as a public trust, but premium cable has more to gain from preserving it 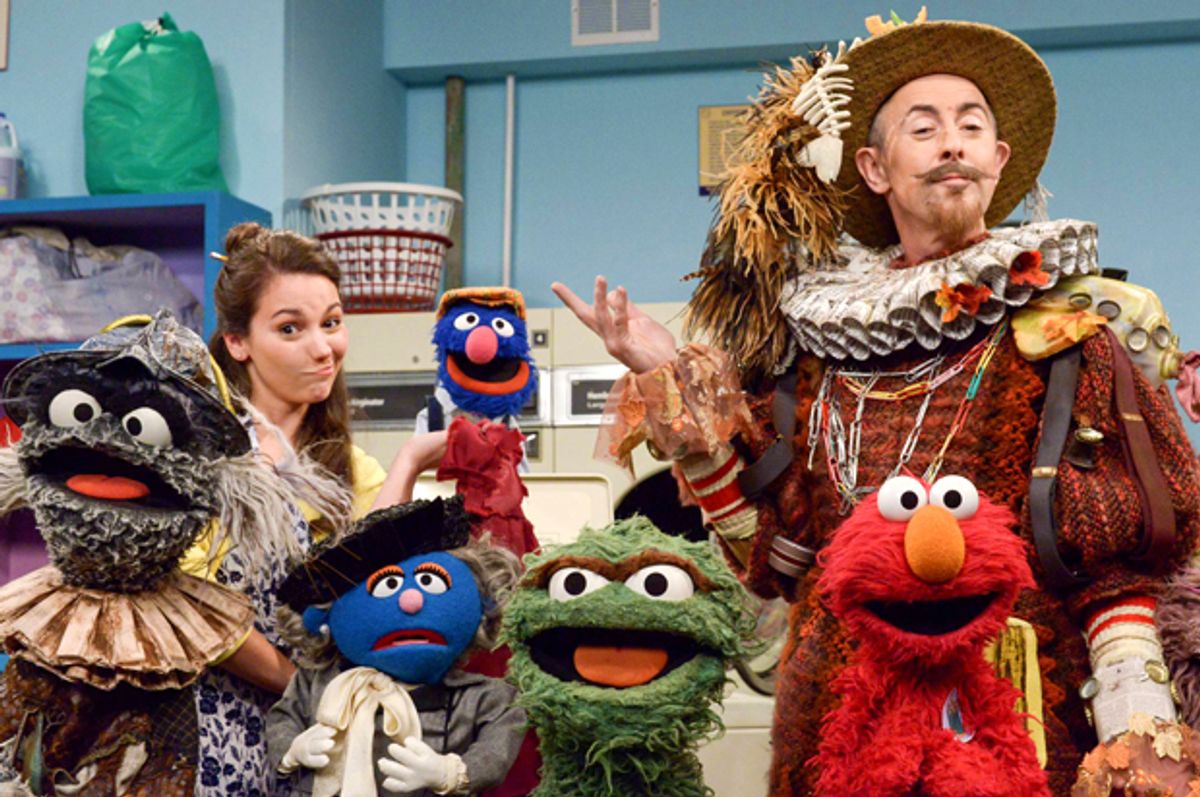 The poster for the 46th season of “Sesame Street,” premiering tomorrow, reads—in the portentous words used by a thousand headlines—“Brought to you by the letters HBO.” Big Bird is holding up the “B,” of course, while Cookie Monster is taking a bite out of the “O.” Elmo is enthusiastically holding up the “H” with a fitting hug. The poster showcases five of the six characters that are the pared-down cast of the revamped “Sesame Street”—Abby Cadabby, Grover and Oscar the Grouch round out the regular cast. (Oscar, naturally, couldn’t be convinced into a photo shoot, and is instead replaced with regular guest Count von Count, who comes in every episode to introduce the number of the day.)

The winsomeness of the poster—paired with “Sesame Street’s" signature knowing wink to its adult audience—is almost enough to sweeten what feels like a bitter and sad deal for fans of that amorphous thing called the public good. Following increasing financial woes, “Sesame Street’s" production company, the award-winning Sesame Workshop (previously called the Children’s Television Workshop) announced this summer that it had inked a deal with premium (and, it should be said, adult) cable network HBO for a five-year deal sponsoring “Sesame Street.” Dwindling DVD sales hit “Sesame Street’s" revenue stream hard, meaning that the ever-resourceful crew behind the show—usually tasked with finding new ways to engage and educate 2- to 5-year-olds—instead had to seek out an entirely new funding model. Under the deal with HBO, “Sesame Street” will air the new episodes of its 46th season exclusively on the premium network until September 2016, at which point PBS member stations will start carrying it for free.

If there was ever a single, dry, media business story that encapsulated America’s own anxiety about the tension between the public and private sectors, conservative and liberal values, the 1 percent and the other 99, the past and the future—this is it. In Forbes, Charles Bramesco questioned the moral authority of the private sector and lamented the lack of funding for National Endowment for the Arts; at the Boston Globe, Jeff Jacoby applauded “Sesame Street’s" move to HBO as the death knell of public television.

The president of the Parents Television Council told the New York Times:

"Kids are getting squeezed in the middle… In order to watch original episodes of the most iconic children’s program in television history, parents are now forced to fork over about $180 per year and subscribe to the most sexually explicit, most graphically violent television network in America. I can’t imagine a greater juxtaposition in television than this."

The discussion around “peak TV” and the rise of “disruptive,” “nontraditional” viewing patterns sounds esoteric and interesting until it turns into descriptors for why a 46-year-old children’s show—one that has reached out to one of the most vulnerable populations in America, lower-income children—is now prevented from living out its mission. Change comes at the expense of the most vulnerable, and in this situation, it feels like “Sesame Street” is being taken away from the audience that needs it most. This is an ideological proving ground, one that takes a beloved artifact of liberal ideals and subjects it to the unreliable creative impulses of the free market. We can stomach Adam Sandler films and gratuitous female nudity, up to a point, but when it comes to our children—and worse, the neediest children—surely, surely, the free market is not a substitute for values, education, imagination, and hope.

It’s hard not to feel this, watching the first two episodes of “Sesame Street” that were released to critics. The opening credits have been reworked to be vivid and high-definition in a way that is overwhelming to my ancient eyes. Abby Cadabby, a new Muppet to me (she joined the cast in 2006), is an unheard-of interloper; Elmo, who is now a fixture of “Sesame Street,” is to my mind still a recent upstart. Computer graphics add to Abby’s magic spells and Elmo’s fantasies, and every 10 minutes, the characters exhort the viewer to get up and move, in what is, I presume, a strong push against childhood obesity.

But the truth is, I have not watched “Sesame Street” in a very long time. James Poniewozik, in his excellent review, expressed remorse at the bygone days of “Sesame Street”—but observes that to most kids, there’s likely no discernible difference at all between “Sesame Street” on HBO and the same show on PBS. Sesame Workshop had already been planning to make many of the formatting changes unveiled on HBO, following the ever-evolving habits of American kids; adult viewers might remember offbeat grime with nostalgia, but “Sesame Street” hasn’t looked like that for years. And indeed, even the nine-month waiting period for new episodes hardly matters to preschoolers, who a) are more than happy to watch things on repeat, ad nauseum and b) might even learn more from repeat viewings than new episodes. Furthermore, as Poniewozik observes drily: “It’s not as though scientists are discovering new numbers and letters.”

Furthermore, it’s not exactly as if “Sesame Street” was fully publicly funded before. As is related by Jessica Goldstein at ThinkProgress, before the HBO deal, PBS was only funding 10 percent of “Sesame Street’s" production costs—despite being synonymous with the brand of “Sesame Street,” especially in political debates, such as that famous moment in 2012 when Mitt Romney slammed Big Bird, and the defunding push of the Reagan years. HBO was actually the first suitor to recognize how important it was to maintain the show’s presence on PBS. Other networks probably wanted exclusivity; that is, after all, what networks do.

Now HBO is fully funding the show’s rumored $20 million per year budget—a budget with millions of dollars of built-in educational research on child development that has been proven, multiple times, to be nearly as beneficial as preschool. And PBS will still manage distribution on its end, much as it did before, to its approximately 350 member stations. The only difference is nine months—nine months, and a fully funded “Sesame Street.” As Dr. Michael Rich, the director of the Center on Media and Child Health and a member of PBS Kids Next Generation Advisory Board, told Goldstein: “The reality is, I think the purity of Sesame Street is not the revenue streams going to or from it so much as it is the mission-driven people who create it.” Other “Sesame Street” advocates express similar sentiments. Though something essential about the identity of “Sesame Street” has been shelved, it’s also part of a recognizable evolution that many creative entities have gone through: the move to corporate sponsorship. Once I got used to the HBO format—and entered into a delightful sequence where Tracee Ellis Ross tries to go to Bed with her Blanket but is interrupted by a Bear, a Basketball, a Beaver and Big Bird—it became more clear to me: “Sesame Street” is still “Sesame Street;” it's the rest of the world that has changed.

I wonder if HBO won’t change even more. After all, the premium network skews liberal and intellectual because its subscribers skew that way; this is a network that dominates awards and media coverage, not through ratings victories but through incisive conversation-creation. (And also sometimes ratings.) HBO can incorporate non-exclusivity and a relationship with PBS into its balance sheet, because HBO knows its subscriber base very well; being sympathetic to public television is not about doing the right thing, in this case, but about good business. PBS is part of “Sesame Street’s" brand, just as the show is part of the network’s brand; HBO’s investment wouldn’t be worth as much if the public-interest portion of “Sesame Street’s" mission was divorced from the Muppets and the music. There is no network that is better at branding, acquisition and staying authentic to its subscribers than HBO, and I say that with mingled respect and scorn. It’s very good pandering, and I just happen to be their perfect target.

The problem is that HBO could change its mind, or change its mission, for so many different reasons. I’d like to think that an interest in art and intellectualism goes hand in hand with the public good, but maybe it doesn’t. If America does transform into a land where Trump is our president-dictator and every person of color is deported back to their great-grandparents' place of birth, maybe HBO spends less money on projects like “The Wire” and “The Jinx” and devotes its attentions to “Another Glorious Day in Trump’s America,” narrated by Sean Penn. Subscriber rates and programming missions could go in any number of ways, dictated by that invisible hand that the economists are always talking about. Relying on a corporation’s altruism is a doomed strategy; maybe that’s why Sesame Workshop cautiously signed on to just a five-year partnership.

On the other hand, HBO probably has more invested in America continuing to be a place with a liberal elite that feels bad about themselves than in Trump’s America; to be frank, HBO appears to have more enthusiasm for maintaining liberal values and the middle class than the majority of politicians in Washington. I’d love for “Sesame Street” to be a publicly funded institution. But in this world, the world we live in, it’s probably safer in the branded hands of HBO.