"Hillary’s look is a practical one": Can we stop talking about Clinton's clothes now? 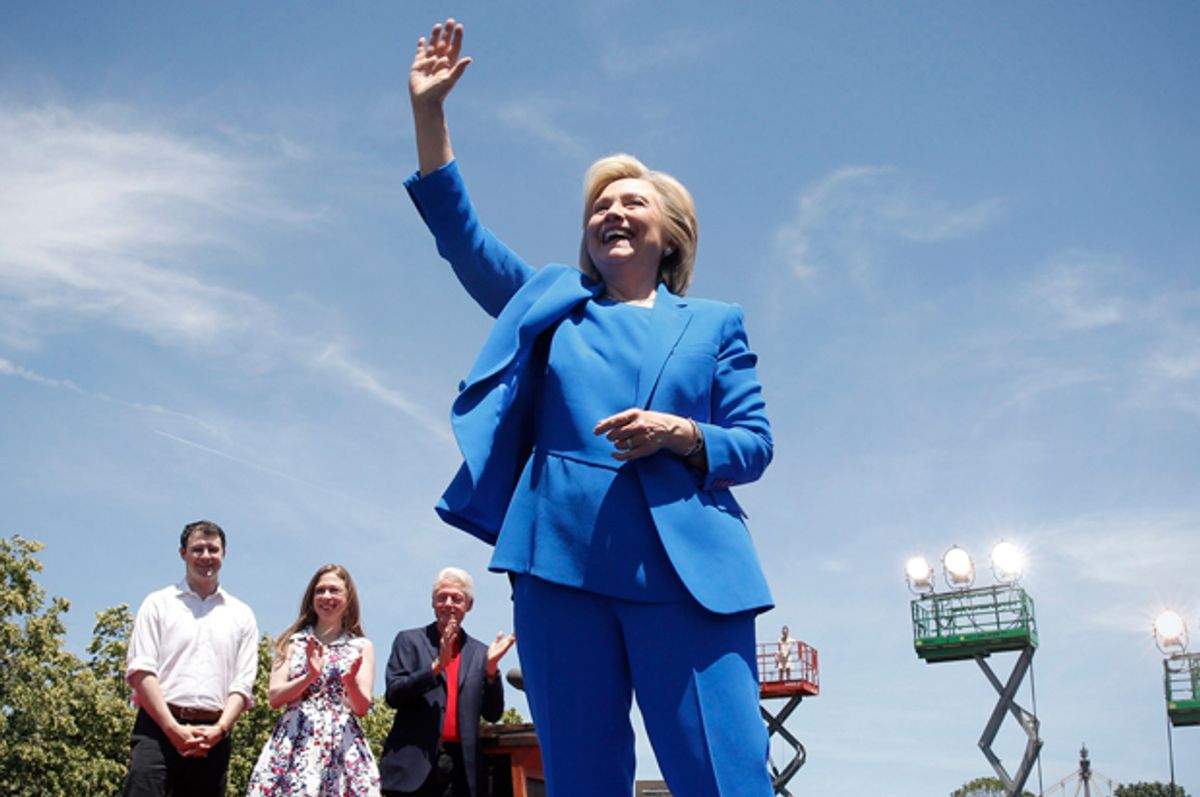 In what may go down as the apex of #SlatePitches, on Friday, writer Vanessa Vitiello Urquhart investigated a Democratic presidential contender in a story that declares that "Hillary Clinton Isn’t a Lesbian — but She Dresses Like One." You know what, fine, let's take the bait. Because by my calculation we will be having these discussions until at least November.

After Vitiello Urquhart establishes that this isn't about sexual identity per se, she commends Clinton by explaining, "If Clinton were a lesbian, I’d be proud to claim her fashion sense. Clinton embodies something many lesbians accomplish effortlessly: She dresses in a way that does not cater to, or even consider, the male gaze." The author understands that of course there isn't one typical lesbian style, but what she admires about Clinton is her career-long commitment to not pandering. "Hillary’s look is a practical one. She chooses outfits that are variations on a relatively narrow theme. Her clothing and hair are neat and well suited to her face and frame," she writes, noting, "It’s simply not possible for straight women to dress practically and simply without judgment, reflection, or comment the way men do. Hence the rumors about Hillary’s sexuality." And she adds that "The expectation that women must worry about being pretty first, and everything else second, can feel constrictive to all kinds of women, not just to lesbians."

Vitiello Urquhart, a self-described "sweater vest wearing lesbian," has explored the themes of fashion and identity before, and how dressing in a way that feels natural and comfortable can also have unintended attention-getting consequences. On her blog, "featuring Tiny Butch Adventures," she's explored gender and image, cheering for "girls who look like girls, and boys who look like girls, and girls who look like boys, and everyone who likes the way they look, and everyone who’d never make them change it." But is her take on Hillary an accurate one?

It's fair to say that the 68 year-old Clinton marches to her own sartorial drummer. She doesn't go for the steely business chic of Carly Fiorina, or wear her hair tousled like Sarah Palin. And she never, even while she was First Lady, aspired to Michelle Obama's status as a trend-setter — a role Obama has taken in stride right up to that flawless marigold Narcisco Rodriguez number she wore for this week's State of the Union. In contrast, even in her famous 1993 Donna Karan "cold shoulder" dress, Clinton bore the demeanor of a lady eager to slip into something a lot more comfortable. Speaking to Lena Dunham late last year, she admitted that while "I do like to fool around with fashion and have some fun with it… I’m hardly a fashion icon… I absolutely admit that."

Instead, along with her partner in the sisterhood of traveling pantsuits, Angela Merkel, Clinton has forged a different identity, one that has evolved over her lengthy public life but remained eternally unfussy. She is now not young nor not whippet thin; she has not chosen to have the flesh on her face pulled somewhere to the back of her head. She furthermore has a career and an identity distinct from her spouse — a transgressive stance in and of itself. Note how, for example, at the recent Republican debate just this week, Carly Fiorina snarled, "Unlike another woman in this race, I actually love spending time with my husband."

Yup, that's the lonely road that Hillary Clinton, presidential candidate, former Secretary of State, one of the most powerful individuals in American politics, travels. More than 20 years after getting flack for declaring that "I suppose I could have stayed home and baked cookies and had teas, but what I decided to do was fulfill my profession, which I entered before my husband was in public life," she is still being assessed by watchers both straight and gay on where she falls on the oh so confining spectrum of expected hetero female demeanor. So as a straight woman who aspires to one day be a successful, self-assured senior citizen in relaxed slacks, can I say that I'd be proud to claim her fashion sense too?