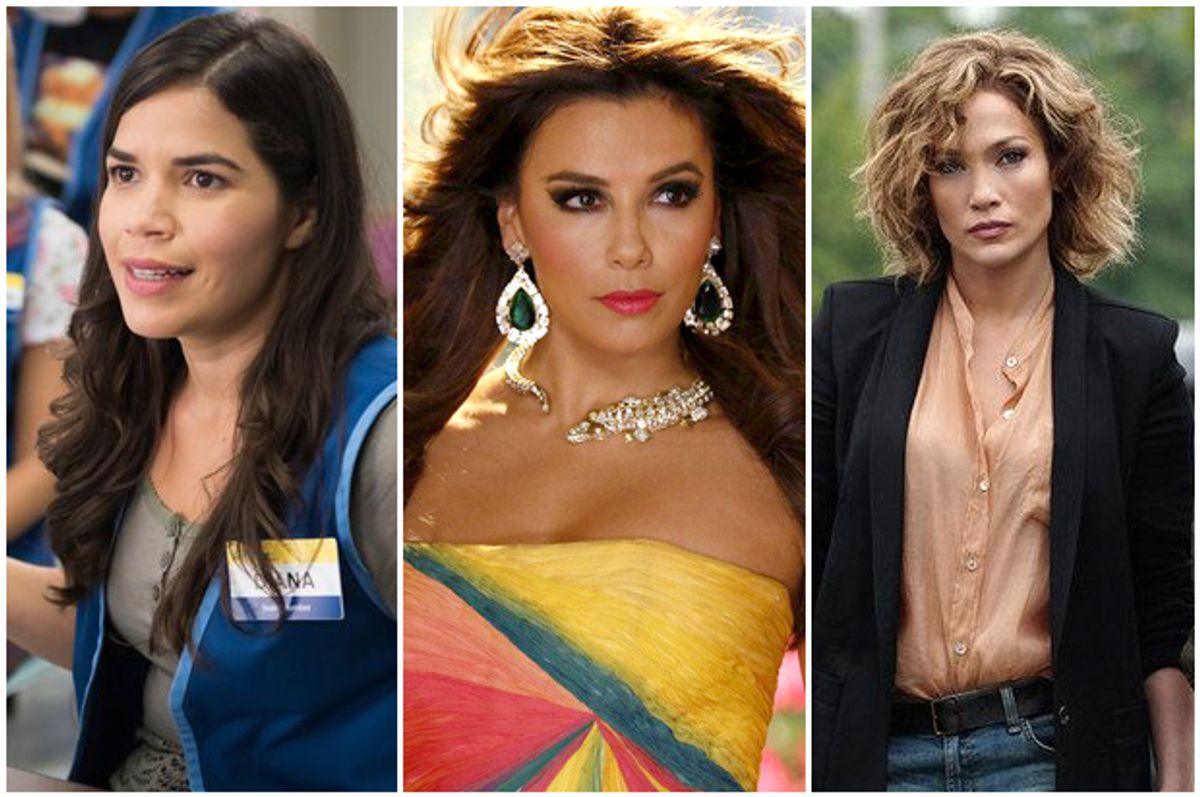 This winter, NBC is making a move for diversity, in one very specific direction: Latin American women. Three debuts this month feature a Latina actress in the lead role: Jennifer Lopez, in the police drama “Shades of Blue”; Eva Longoria, in “Telenovela”; and America Ferrera, in “Superstore.” In “Shades of Blue,” Lopez plays a corrupt New York cop forced into a tricky, unstable situation by Internal Affairs and her own financial straits. In “Telenovela,” Longoria plays the lead of, you guessed it, a telenovela—“Las Leyes De Pasión”—despite the fact that she isn’t at all fluent in Spanish. And in “Superstore,” Ferrera plays a secretive supervisor who has buried all of her hopes and dreams in order to focus on her retail job. Each role is recognizably that of a character, not a caricature. The shows have their individual flaws, but are all immediately more interesting for bringing in the added depth of racial and cultural experience; it is also a joy, frankly, to have both Lopez and Ferrara on-screen again. (I’ll get to Longoria in a minute.)

It’s a sudden embarrassment of riches from NBC, and one that confirms something ABC and Fox have been proving for a few years now: Diversity is good business. The Peacock has finally gotten the memo, presumably through some kind of long-ignored or recently solicited report on where they should be investing their money, after the network has struggled to gain traction in the national conversation with projects like “Best Time Ever With Neil Patrick Harris,” “Undateable” and “Mysteries of Laura.” NBC’s institutional lack of chill means that once that report or memo comes back pointing to diversity, the network orders not just one but three series to air, all at the same time—but at least this January, I am not complaining. The network has made investments in shows with a lot of potential, and has perhaps begun to understand that if they want to be America’s biggest network, they have to look like America.

What is interesting is that the show is investing particularly in Latino audiences, and more specifically, in Latina viewership. We know that women watch more television than men, especially on broadcast, but NBC has literally doubled down on Latina women in just the last month. The network’s only critical hits last fall were “The Carmichael Show,” about a black family in Charlotte, North Carolina, and “The Wiz Live!” the iconic black musical, which might point to a trend in investing in stories about black characters. Certainly, that’s a trend the rest of television has followed: Fox’s current flagship show is “Empire,” one of the most-watched shows in America, which tells the story of a black family in the music industry; ABC’s racially conscious programming is led by the Shondaland properties, two of which—“Scandal” and “How to Get Away With Murder”—are led by black women.

In the discussion of racial representation in media, though, Latino representation might be in the worst shape of all the minority groups desperate for attention. Per “The Latino Media Gap,” commissioned from the Center for the Study of Ethnicity and Race at Columbia University, while the American Latino population grew 43 percent in the decade from 2000 to 2010, their corresponding representation and participation in media either stayed the same or proportionally declined. Furthermore, unlike most media representation issues, which tend to be worse off in film (#OscarsSoWhite), Latino representation is actually worse on television—the box-office success and worldwide reach of “The Fast and the Furious” franchise alone puts film’s representation of Latinos in better shape than television’s. In addition to the pure numbers game, the report observes that Latinos in media tend to play maids, criminals, police officers or blue-collar workers: In “Two and a Half Men,” 50 percent of the portrayed Latinos were either blue-collar workers or “sexy Latinas”; in “The Big Bang Theory”—a show about physicists and academics!—50 percent were either blue-collar workers or criminals. (Given the roundness of those numbers, I’d bet that the report is looking at a really low sample size, which is just another disappointing footnote to a frustrating statistic.)

Though there are prominent shows starring Latinos in supporting roles on all the broadcast networks—“Brooklyn Nine-Nine” (Fox), “Law and Order: SVU” (NBC), “Modern Family” (ABC), “Code Black” (CBS)—with the cancellation of ABC’s “Cristela” early last year, the only leading Latino character on English-language television was on the CW, with the award-winning “Jane the Virgin.” Meanwhile, the last Latino man on broadcast to lead his own show was Jimmy Smits, in 2010, with the quickly canceled NBC series “Outlaw”; George Lopez was the last Latino man to lead a sitcom, from 2002 to 2007. (This is perhaps most surprising when you remember that one of America’s first beloved and influential sitcoms was produced by and starred a Latino male—Desi Arnaz, in “I Love Lucy,” on CBS.) Within the context of the television landscape, it becomes a little clearer just how revolutionary NBC’s decision to invest in Latinas is—even if it appears to come at the expense of Latino men and any other leads of color. This is a drastic repainting of the landscape—and, more, an attempt to grab a segment of the underserved audience that other networks haven’t yet nabbed. Considering that NBCUniversal also runs NBC Universo and Telemundo, the megacorporation literally has a lot invested in America’s Latino population.

And the reason is simple: purchasing power. I’d love to attribute some altruism to NBC’s choices this winter—and who knows, there might be some there—but the investment in Latina women is because, according to Nielsen, the demographic controls about $1.5 trillion in purchasing power, which is an awful lot of money. As this Guardian article drily observes, “When it comes to increasing viewers, the need for securing a Latino audience is not just a politically correct pander, but a financial necessity.” NBC Universal property Telemundo can’t really chase Univision in terms of Spanish-language ratings—Univision is the undisputed giant in this arena, and has begun to routinely trump English-language ratings, as English-language viewers switch to nontraditional viewing practices—but it can get the next generation of viewers, those viewers who don’t necessarily watch programming in Spanish but still want to see themselves on television. NBC Universo is supposed to do that on cable, but NBC, of course, has a much broader reach.

Which brings me back to “Telenovela.” Of the three shows I’ve discussed, “Telenovela” is by far the weakest; there’s an overdone quality of trying way too hard, and an obvious attempt to replicate the success of “Jane the Virgin” by making the show both like a telenovela and about a telenovela. Longoria, as lead Ana Sofia, has two hot men in her life, just like Jane Villanueva (Gina Rodriguez); both women also have a propensity for dropping into strangely melodramatic situations. But while “Jane the Virgin” is a finely tuned machine of satire and sensitivity, “Telenovela” is just scattered and loud. It’s less an investigation of telenovela tropes than it is a reproduction of their worst stereotypes, unfortunately; meanwhile, outside the telenovela, the show doesn’t have a lot of substance. For example, Ana Sofia’s primary character trait, for the first several episodes, is that she’s very beautiful but also clumsy, and Longoria, who is stunning and radiant, can’t even sell that.

In episode four, though, “Telenovela” reveals a little more originality. Ana, who does not speak Spanish well, goes on a date with someone who believes her to be more fluent than she actually is. He also believes her to be a good salsa dancer who likes spicy food. The night is an awkward half-hour of Ana trying to negotiate between the expected and her own reality—and though it ends predictably, as one might expect from an episode named “The Kiss,” there’s something fascinating about the novelty of the narrative. There’s a lot of television people watch in the world, and most of it is rather mediocre. But I’m happy to live in a world where an inferior clone of “Jane the Virgin” exists; even if it’s not incredible, it’s still doing something I’ve never seen before.