The "rule of 3" is over: We've entered the devastating age of nonstop collective mourning

We have more celebrities than ever, and the Internet of today is like an “In Memoriam” segment that never stops 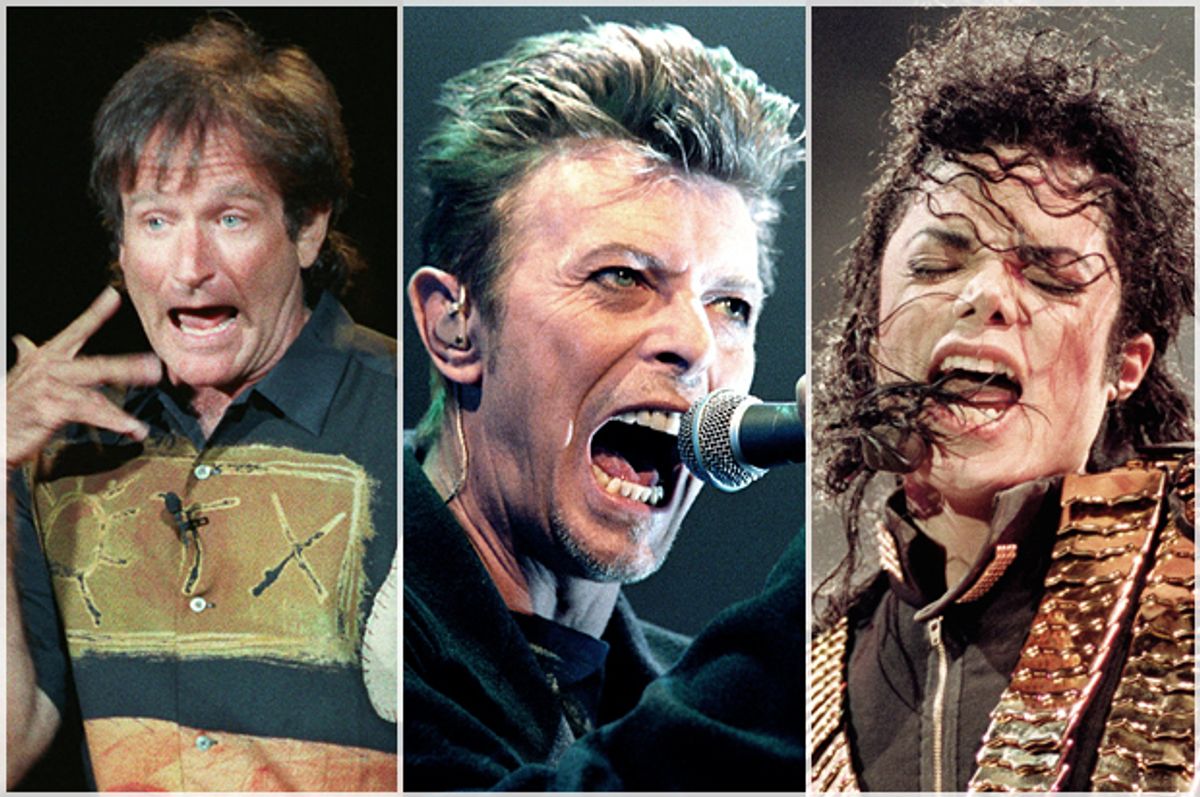 It’s a commonly accepted truth that celebrities die in threes. The most famous case was on Jun. 24, 2009—when Ed McMahon, Farrah Fawcett, and Michael Jackson all died within hours of each other, a trio of tragedies that sent shockwaves through the media.

In the first two weeks of 2016, we’ve already added two more names to the list. Alan Rickman, the beloved British actor best known for his roles in “Die Hard,” “Truly Madly Deeply,” and as Severus Snape in the “Harry Potter” series, died of cancer at the age of 69. According to the Guardian, Mr. Rickman was “surrounded by family and friends” as he passed, and the outpouring of affection on Twitter was equally warm. Rickman was the top trending topic on social media as I wrote this — in a week that also witnessed the passing of rock legend and queer icon David Bowie, who was also 69. It was a rough week, to say the least.

If losing a celebrity like, say, Maureen O’Hara—known for her work in “Miracle on 34th Street” and “The Quiet Man”—was once a small, if tragic blip on the radar, these tragedies are becoming ingrained into our cultural consciousness, hitting us harder than ever before. When film critic Roger Ebert—who had been a personal hero to me—died in April of 2013, I was so devastated that I didn’t leave my apartment for a week. I cried harder at the news of his death than about people I knew personally. But while those feelings are raw and real, there can be an unfortunate dark side to the constant wave of bad news in a media age where celebrity death becomes a business model.

Experts have suggested that mourning a celebrity’s death is a reasonable response to our own feelings of grief—which are often akin to losing a loved one. “They've been a part of our lives,” psychologist Alan Hilfer told New York magazine. “We see them on TV, they're in our living rooms, we feel we know them, and we incorporate them almost as though they're part of our families, though most of us recognize that they're not.”

In a study for Kansas State, researcher Richard Harris found that the reason for this association is through our “parasocial interactions” with celebrities. “Many people have probably spent more time with the characters on ‘Friends’ than they have with most of their real-life friends," Harris argues. While he calls it a one-sided relationship, the bonds we create with fiction are meaningful yet often subconscious. How often have you found that beloved phrase you like to use is actually a quote from a favorite character in movie and you didn’t even realize it?

Our relationships with famous people are their own kind of fiction—because they allow us to project our own ideas and desires onto a blank space we’re allowed to fill in; thus, Alan Rickman and David Bowie are what they mean to us. But those relationships—and our feelings when they are severed by death—can have very powerful associations with the real world. For Carol Weis, a writer and editor in Springfield, Mass., Michael Jackson’s overdose coincided with the suicide of her best friend’s son. Obsessively watching the news coverage of his death, as she told Hilfer, was a way of processing the unfathomable.

These kinds of public mourning are treated as silly and frivolous, but the virality of celebrity mourning speaks to what death means in the digital era. Dying is no longer a private act; it takes place on Twitter and Facebook, where users’ personal pages become makeshift memorial sites after their passing. Nearly a year after my best friend died, people were still wishing her “Happy Birthday” on her account to remember her.

While one might assume that viewing death from behind a computer screen might give us a detached emotional distance from the process, the opposite is often true. When Robin Williams died in 2014—after the “Mrs. Doubtfire” actor took his own life following a lifelong battle with depression and, as we found out later, Lewy body dementia — the tragedy lingered over the media for weeks like a black cloud; his passing seemed like the only story in existence. Because his death was being repeatedly farmed for clickbait and page views on the Internet, it was inescapable. Many who experience mental illness reported that they found the deluge of content incredibly triggering.

The inevitable onslaught of Robin Williams listicles or Bowie tributes is important when considering that there’s a distinct reason it feels like we’re getting increasing numbers of celebrity deaths: Many of the celebrities we grew up with are reaching that age where we’re watching through our fingers, hoping for the very best and dreading the worst. After all, it feels like there’s a new Betty White death hoax every year, followed by a collective sigh when we realize we just got fooled.

And in addition, there are simply more famous people than there have ever been before—in an age where the Web has democratized fame. Whereas celebrity used to be enjoyed by a very small group of powerful people (e.g., movie stars, musicians, politicians, and best-selling authors), now anyone with a webcam and a YouTube account has the ability to build a following. Can you imagine what the “In Memoriam” list is going to look like in 50 years—when we’re adding the slew of Vine and Instagram stars to the mix? That black cloud I mentioned won’t eat the media; it will be the media.

Icons like Alan Rickman and David Bowie matter to us in important, deeply meaningful ways, and that impact should never be diminished. We should feel free to mourn our heroes in any way that feels appropriate to us. But if the death industry is bigger than ever—and only growing—perhaps the best thing to do for ourselves would be to step away from our computers, sit together in a bar, and enjoy the memories and the music they left behind.