Candidates get into a ridiculous tiff over whose birthplace is less "real America," New York or Canada 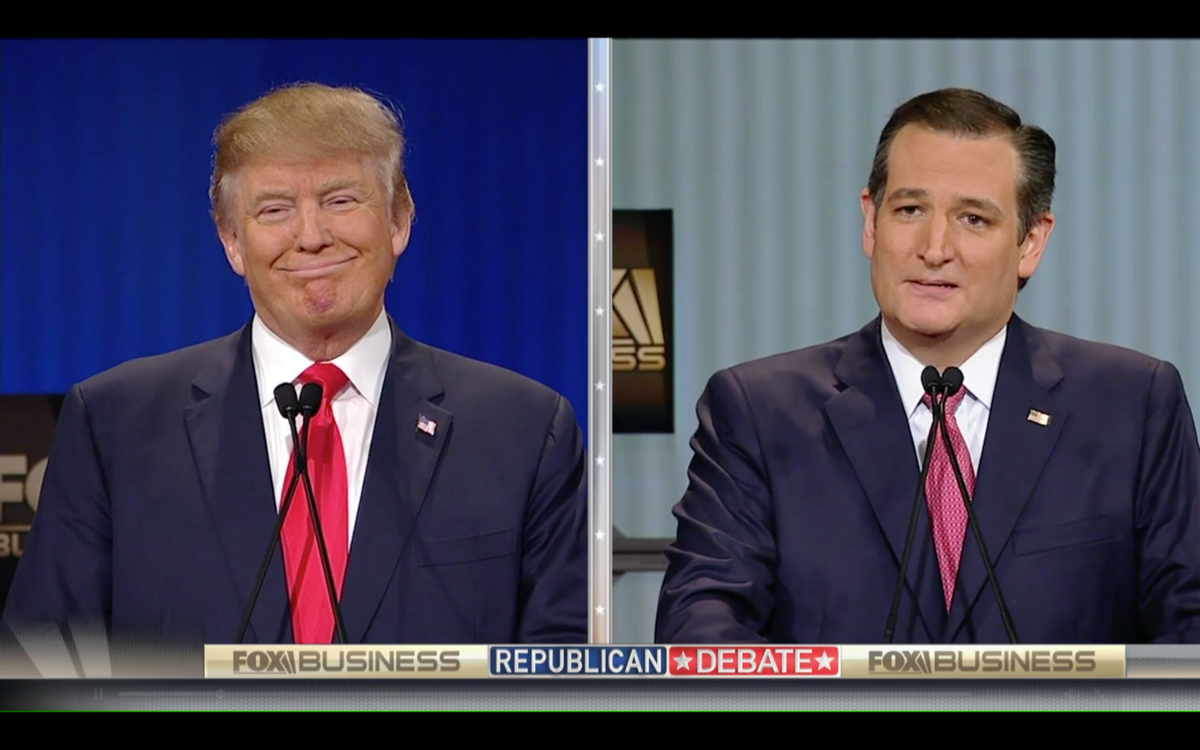 It's tempting to denounce Fox Business Network for focusing so much of Thursday's Republican debate on the silly fight between Donald Trump and Ted Cruz about whose birthplace is worse: Canada and New York City. On the other hand, it's not like the candidates have anything smarter to say about real issues – we're talking about men who think that briefly detaining soldiers trespassing in foreign waters is practically a declaration of war – so okay, let's talk about whose mother brought greater shame upon the family by where she gave birth.

Things started off when Fox Business, no doubt aware that ratings are threatened by the fact that Republican debates are coming around more frequently than pizza night in some houses, went ahead and asked Ted Cruz about this stupid, Trump-inspired debate over whether a born citizen is a natural born citizen.

Cruz's background as a lawyer revealed itself in his response. No short, pithy responses for him. He practically rolled out a projector and walked the crowd through a lengthy, multi-faceted argument in his own defense: Donald Trump is only saying this because he's desperate. Trump's own mother was a Scottish national. As a lawyer, he is better equipped to interpret law than Trump. And, of course, there was soaring rhetoric about how everyone on stage is an American, but he (posing, looking at the sky, impressed by his own profundity) has the courage to talk about issues that really matter, aka whatever internal polling says is scaring elderly white people these days.

.@tedcruz fired back at @realDonaldTrump over birther claims. #GOPDebate pic.twitter.com/VHOSRAXT1c

All just as well, but Cruz's dark genius as a politician is truly revealed in the rebuttal he has created for this attack, a rebuttal that was on full display during the debate. To paraphrase: "I may be Canadian, you, Trump, are a New Yorker."

I mean, as accusations go, it's hard to deny. Half of Canada isn't covered with the word "Cruz," but, much to the chagrin of the locals, you can't say the same thing about Trump and New York City.

New York is, of course, technically in the United States, but Cruz is betting that Republican voters see that situation as a temporary misfortune. But even as the Empire State sits within U.S. borders, the "Duck Dynasty" crowd would like to believe that they (OK, we) don't really count.

Maria Bartiromo started things off with, "Senator Cruz, you suggested Mr. Trump, quote, 'embodies New York values.' Could you explain what you mean by that?"

"You know, I think most people know exactly what New York values are," Cruz replied. Warm audience laughter, which could mean anything from "Jewish" to "I hear they wear clothes that fit."

After Bartiromo pressed further, he caved, saying, "the values in New York City are socially liberal or pro-abortion or pro- gay-marriage, focus around money and the media."

"Not a lot of conservatives come out of Manhattan. I'm just saying," he finished, echoing Trump's stump speech line about how "not too many evangelicals come out of Cuba."

Echoing Trump's birthplace obsession – even imitating his rhetoric and throwing it in his face – is a pretty smooth move. But Trump has a trump card: 9/11.

"When the World Trade Center came down, I saw something that no place on Earth could have handled more beautifully, more humanely than New York," Trump replied. "You had two 110-story buildings come crashing down. I saw them come down. Thousands of people killed, and the cleanup started the next day, and it was the most horrific cleanup, probably in the history of doing this, and in construction. I was down there, and I've never seen anything like it."

Trump's got a point. You can have your patriotic kitsch with a bald eagle shedding tears over an American flag planted in the WTC rubble, or you can claim New Yorkers aren't real Americans, but you really can't have both.

Your move, Canada. Or Cuba. Wherever evangelicals don't really come from, Trump hears.

WATCH the video clip below: