Bernie Sanders is no socialist: Socialism is his brand, but he's a Democrat in every way but name

I wrote Bernie's biography so I know: On capitalism, on Israel, on foreign policy, on Nader, he's quite traditional 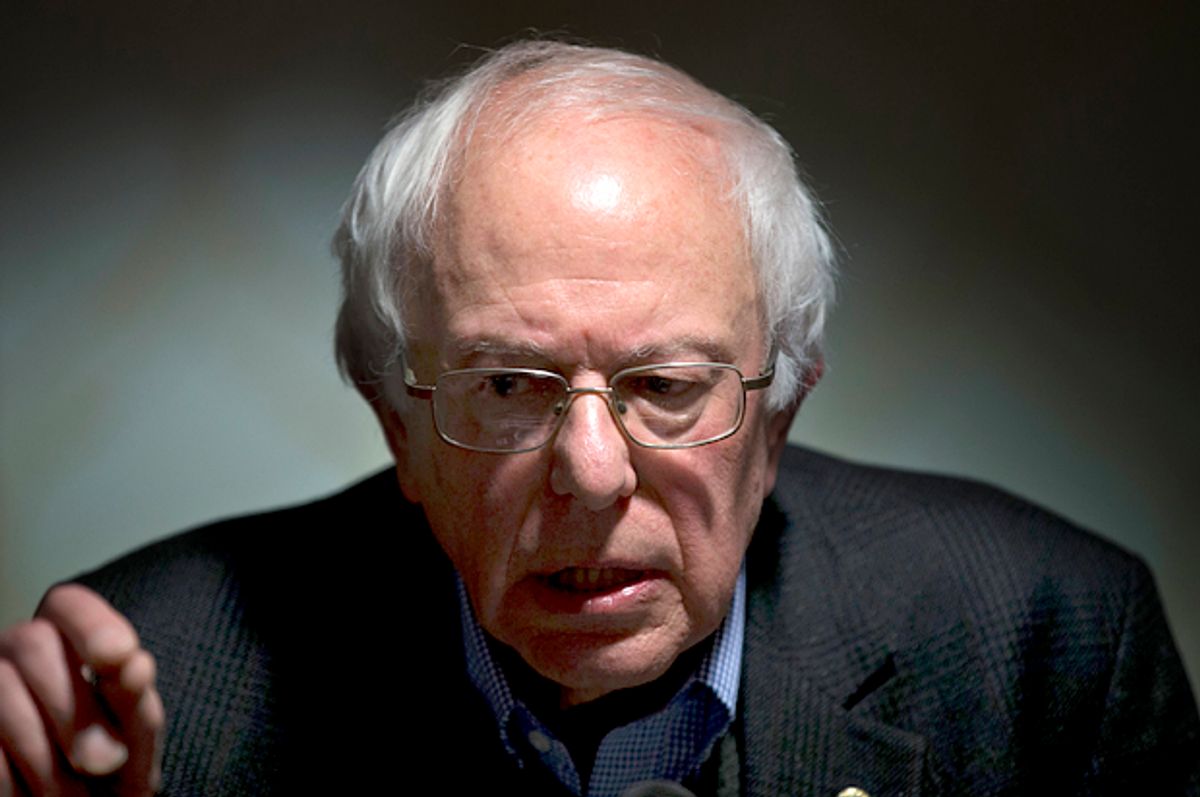 Bernie Sanders is a stubborn man, a fact I kept coming across as I reported and wrote "Why Bernie Sanders Matters," the unauthorized biography of the Democratic presidential candidate. That trait might explain why he continues to describe himself as a “Democratic Socialist,” even though any mention of the “S-word” turns off many American voters. A recent Gallup poll found that less than half of Americans would vote for a candidate who is a socialist. “Socialist” in an epithet, hurled by conservatives at President Barack Obama to discredit his health care reform efforts.

To be sure, Sanders has been gradually moving away from socialism. As a radical student activist in the 1960s, he identified with the Socialist Workers Party. When he first ran for statewide office in Vermont during the 1970s, he described himself as a socialist. In office, he all but glorified the term. Walk into his Senate office and you will see a plaque on the wall honoring Eugene V. Debs, who ran for president five times as leader of the Socialist Party of America.

But Bernie Sanders is not a socialist. No way, no how. He’s not even a democratic socialist, as it is practiced in the Scandinavian nations.  Fact is the socialists don’t want Sanders. Here’s why:

No Means: Socialism distinguishes itself from capitalism, fascism and other political/economic systems by this fundamental requirement: the state or the community shall own the means of production. That means public ownership and control of corporations, especially major ones like power companies and auto makers. In November Bernie Sanders delivered a speech at Georgetown University to define his brand of socialism. “I don’t believe government should take over the grocery store down the street or own the means of production,” he said. So Sanders, by definition, is not a socialist.

Money Talks: Sanders believes in the capitalist system. He might advocate reform of capitalism’s current excesses, but he is a capitalist. As a congressman, Sanders successfully stopped the government from bestowing multi-million-dollar bonuses on executives at Lockheed. But he never attacked the company’s basic capitalist premise. Likewise, when peace protestors tried to block the entrance to a GE plant in Burlington when he was mayor, he had them arrested. Socialist Party of USA co-chair Mimi Soltysik sees the world differently: “We don’t see capitalism as a reformable institution.” Sanders does.

Bernie the Bomber: Socialists embrace pacifism. War is a last resort. Sanders’s model, Eugene Debs, was jailed for his opposition to World War I. But Sanders has cast vote after vote for sending troops to war and bombing one side or another. When he supported NATO’s bombing of Yugoslavia in 1999, Vermonters occupied his office and a staffer quit. He’s voted for sending troops to Afghanistan. He enthusiastically supported Obama’s most recent budget, with a five percent increase in military spending.

Tepid Dane: When pressed about his brand of socialism, Sanders often will refer to the Scandinavian nations that practice “democratic socialism.” Northern European countries like Denmark, Norway, Finland and Sweden have governments that tax heavily and provide excellent free public education and health care, for example. Asked by the Wall Street Journal for his definition, he said: “For me, what democratic socialism is about is to maintain the strong entrepreneurial spirit that we have in this country to continue to produce wealth, but to make certain that the wealth is much more equitably distributed than is currently the case.” So, kinder and gentler capitalism.

Democrat Down Deep:  Sanders is a Democrat in every way but the name. Running in Vermont, Sanders had to distinguish himself from Democrats to establish his own brand. But once he got to Congress in 1990, he voted with the Dems, nearly 100 percent of the time. The Democratic establishment funded his 2006 senate campaign, including $10,000 from HillPAC, Hillary Clinton’s funding arm.  He caucused with the Democrats in the Senate. And by the way, he’s running as a Democrat.

Nader Not: For many left-leaning Americans, Ralph Nader remains the most progressive leader in America. He and his “Nader’s Raiders” have advocated for the public against corporate America for decades. But Sanders and Nader don’t mix. He refuses to take Nader’s calls. Nader has branded Sanders “The Lone Ranger.” Sanders refused to support Nader’s 2004 presidential campaign. “Not only am I going to vote for John Kerry,” Sanders said, “I am going to run around this country and do everything I can to dissuade people from voting for Ralph Nader.”

GOP Mayor: In his first term as mayor of Burlington, Vermont, Sanders morphed into a fiscal conservative, after running as a social progressive. He balanced the city’s books, cut taxes and built up reserves. “We‘re going to out Republican the Republicans,” he was quoted as saying. When he ran for office, Sanders undercut the incumbent Democrat by accusing him of playing up to developers who wanted to build condominiums on the Lake Champlain shoreline, rather than public parks. As mayor, Sanders supported the same developer; progressives mounted a referendum to defeat Sanders’s deal with the developer. “We must ask how the Sanders administration’s economic development policies differ from a traditional capitalist approach,” Steven Soifer wrote in The Socialist Mayor.

Zionist Leanings: When it comes to Israel, virtually all leftists, progressives and socialists of any stripe side with the Palestinians. In Europe and U.S. college campuses, Israel represents a warmongering oppressor. Note the current BDS movement to boycott Israel and divest investments in the country – driven by leftists. But Senator Sanders has often defended the Israelis and voted on their side. He has voted for billions in foreign and military aid to Israel. Sanders enraged progressives when he supported the Israeli invasion of Gaza in 2014. At a town meeting in Cabot, Vermont, he was forced to shout down protesters.

Populism Rules: Add up Bernie Sanders’s sayings and stands over the years, especially after 1980, and they will lead you to a clear conclusion: Sanders is much more like Huey Long, the populist governor of Louisiana, rather than his socialist icon Eugene Debs.

All of which begs the question: why does Bernie Sanders cling to the Socialist brand -- democratic or otherwise?

In part, Sanders cannot bear to be associated completely with the Democratic Party. He’s been running against Democrats his whole life. His brand requires him to be the insurgent, the lonely crusader, the radical alternative. Perhaps he truly believes in a more socialist system where the government steps in more stridently to redistribute wealth, ensure quality education for all and provide free health insurance. And maybe Bernie Sanders cannot change his basic philosophy just because it will improve his chances of prevailing. Perhaps it’s true that he’s the one political candidate who will not do the expedient thing, like dropping socialism from his brand.

And maybe that’s why voters will look beyond socialism and buy Bernie Sanders, regardless of how he’s defined, by himself or others.