Martin Luther King, Rachel Dolezal and Donald Trump: The recurring story of race that has shaped our history

What would MLK see in America today? A transformed nation that keeps repeating the same racial narratives 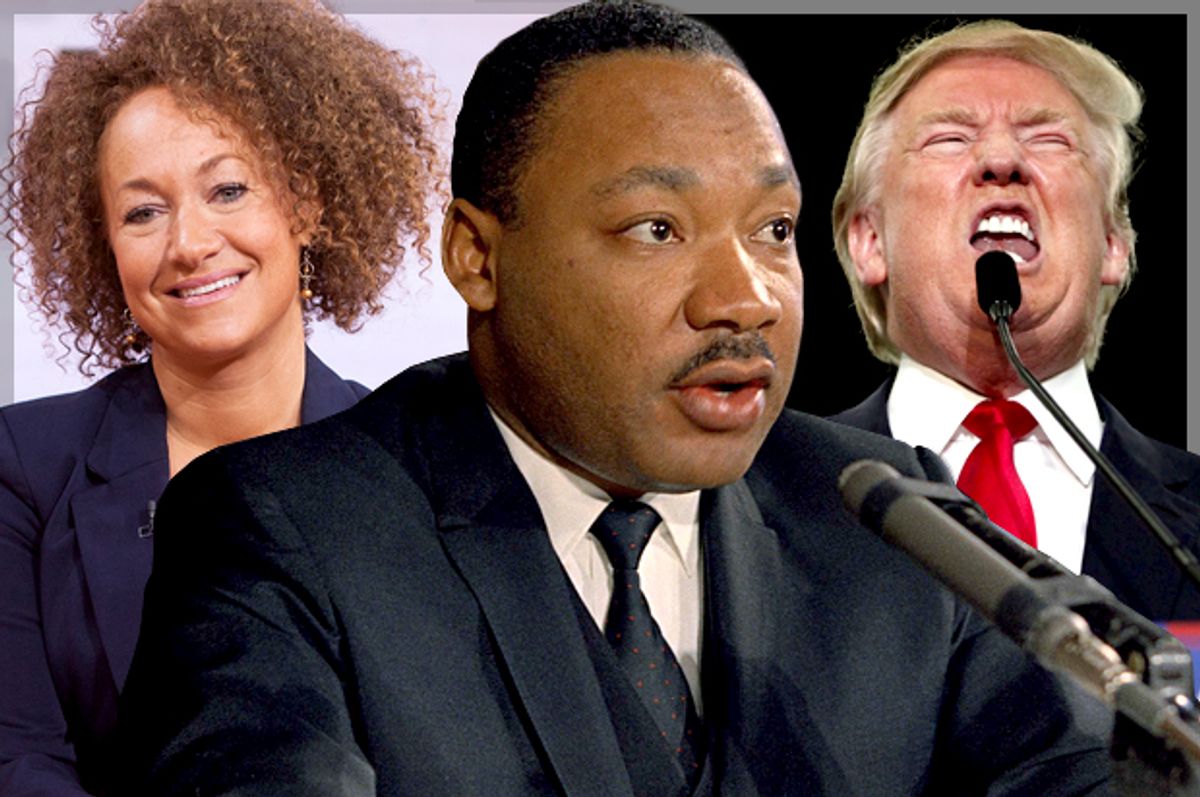 It’s easy to feel a bit cynical about the way the Rev. Martin Luther King Jr., whose birthday we celebrate this weekend, has become an American secular saint. King is misquoted or selectively paraphrased by politicians who would have had him investigated or arrested as a contemporary. Or he is framed as a one-issue “man of faith” whose vision of social justice and racial equality went no further than the soaring rhetoric of the 1963 “I Have a Dream” speech and the Voting Rights Act (a law that was radical enough in its own way, and that many of the elected officials who quote King at opportune moments have stealthily worked to defund, defang and disable).

King did not live long enough to play a major role in popular organizing against the Vietnam War, but he was clearly heading in that direction. We can only speculate how he would have interacted with the modern feminist movement, or the LGBT movement, both of which were in their infancy in 1968. As we saw King portrayed by David Oyelowo in Ava DuVernay’s fascinating but flawed film “Selma,” he was both a strategist and a theoretician of nonviolent civil disobedience, a confrontational approach to power that goes well beyond “protest.” As developed by Mahatma Gandhi, King and many other people in many other movements, nonviolent civil disobedience requires activists who are prepared to put their safety, their freedom and sometimes their lives at risk, in order to expose the hypocrisy and brutality of ruling elites and the police who serve their interests.

We know that King was in Memphis at the time of his death to help organize the city’s exploited and underpaid sanitation workers, and that he understood racism not simply as a matter of legal inequality but also as a question of economic power. He commented on several occasions that poor and disadvantaged whites in the rural South had been encouraged to vent their frustrations by way of racist violence and overt bigotry, directed at the only group worse off than themselves. He would have been fascinated by Black Panther leader Fred Hampton’s outreach efforts in poor white neighborhoods on the South Side of Chicago, and might have wondered how much that had to do with the Chicago Police Department’s assassination of Hampton shortly thereafter.

King was a man of his time, and a person whose troubled personal life might have made him an unpalatable political leader today (as “Selma” also made clear). What would he make of America circa 2016, on what would have been his 87th birthday? (It’s startling to realize that King could easily still be alive. He’d be younger than my mother.) No one can answer that question, and I won’t presume to try. One indirect but important legacy of King’s movement is that someone in my position — a white man behind a computer, writing about “race” from a position of presumed journalistic neutrality — is compelled, for both moral and pragmatic reasons, to consider the limits of his own perspective. Can I actually discern and correct for my own level of privilege, or detect whatever unconscious attitudes and prejudices I have internalized? By definition, I'm pretty sure I can't. But being aware that those things may be issues for me, or for readers, is an important starting point.

On one hand, all is changed, changed utterly, in the years since King’s death, as the Irish poet William Butler Yeats said about a different era of political transformation. The dynamics of race in America have altered significantly: In 1968, Latinos were a scattered and disparate group with little sense of collective identity, largely found in California, Texas and New York City. Outside certain urban enclaves, immigrants were nearly invisible. Despite this reshaped context, the contours of American society might look familiar to King, and the patterns of race and racism tend to repeat themselves.

If race in America is no longer just a question of black and white, those two invented categories that have haunted our nation’s history have loomed large over the last year. This was the year of Black Lives Matter, and a year of extensive public debate over the nature of the relationship between African-Americans and the police. It was a year that brought us an unfolding series of protests or disturbances or “riots” in African-American neighborhoods, a theme or pattern King would recognize immediately. While the Civil Rights Movement in the American South concerned much bigger and broader issues than policing, the overt violence and repression it provoked from police departments and rural sheriffs attracted worldwide attention, and became an enormous part of King’s struggle for justice.

For other black activists of that period — especially the Black Panthers, but also Malcolm X’s Nation of Islam and Stokely Carmichael’s “black power” movement — police violence was a central and defining issue. It was the mechanism by which African-American communities were imprisoned and oppressed, and it was a metaphor that revealed the actual power relationships of American society. It would not be remotely true to say that nothing has changed since those turbulent days of the mid-1960s, but the cyclical recurrence of this issue suggests that those fundamental power relationships have not been addressed.

As numerous commentators on Fox News or right-wing radio will tell you, most of the Baltimore police officers apparently implicated in the death of Freddie Gray are themselves black. That would not have seemed conceivable to King or the Panthers, perhaps, and neither would the fact that the United States has twice elected a black president. But those who would argue today that facts on the ground in Baltimore, or in the White House, prove that racism is no longer a factor in policing, in politics or in the exercise of power are deliberately ignoring the lessons of history. (Which is virtually our national pastime. If it stings when snooty foreign intellectuals depict Americans as not merely ignorant about the world but also profoundly incurious, that’s because it’s largely true.)

In an especially heartbreaking instance of historical recurrence, we saw an angry young white man commit mass murder in a historic Southern black church, an episode that at first might make King wonder whether anything has changed in America. But the aftermath of that heartbreaking tragedy had unexpected consequences that really did feel like change. Amid the outpouring of national grief, we had an open conversation about the various meanings of the Confederate battle flag and the legacy of the Civil War that would not have been possible even a decade ago. To a large extent I mean a conversation among white people: An elderly female relative from an affluent Southern background told me tearfully that she had never known how hurtful the Rebel flag was to black people, or that it was still used by white supremacists to stir up hatred. It may be fair to say that she had chosen not to know those things, but I believe she was sincere.

During the fall semester we saw an eruption of heated protests — first at the University of Missouri, then at Yale, and then at numerous other campuses — over the legacy of racism in higher education. King’s own educational career took him back and forth between predominantly black and predominantly white institutions, and it seems likely he would have recognized the social and cultural pressures at work. You could argue that historical recurrence was at work here as well, on various levels. Although the student protest movement of King’s era was predominantly white, less than a year after his death black students at UCLA led a massive walkout after the university’s firing of Angela Davis, an incident that terrorized the white establishment and polarized the media much as the recent campus controversies have done.

Indeed, another recurrent phenomenon King would have recognized all too well was the rising tide of white rage and white backlash, arguably the biggest racial story of America in 2015. (Especially in the sense that those caught up in it do not perceive it as racial at all but as a question of patriotism and national identity, of “making America great again.”) From the perspective of this backlash, the campus protests and Black Lives Matter were blended with the real but exaggerated specter of ISIS and the entirely imaginary invasion of violent immigrants and refugees into an undifferentiated horde of dark-skinned people devoted to destroying the American way of life.

Faced with inarguable demographic changes and its own visible shrinkage, the exurban white working class that has fueled Donald Trump’s rise may feel itself embattled as never before. But that too is cyclical, and not particularly new. (In “The Great Gatsby,” the odious Tom Buchanan is reading some book about how immigrants will destroy the nation’s Anglo-American identity.) As King would have told you, it was much the same fear of lost relative privilege and diminished social status that fueled virulent and violent racism in the American South, among people who were themselves marginalized and exploited.

Trump himself would look both profoundly familiar and profoundly strange to King, I suspect, as would the intensely racialized nature of the contemporary Republican Party. Various journalists and academics have sought to compare Trump’s version of populism with that of George Wallace, King’s Alabama nemesis, but the differences are more striking than the similarities. Trump appeals almost entirely to delusional and irrational white anger, but it is rhetorically necessary for him to deny being a racist or a xenophobe or any sort of bigot. Wallace embraced bigotry and almost certainly exaggerated it for political purposes; at the beginning and the end of his career, he relied on interracial coalitions to win elections. He was also an old-school Big Government Democrat who funded extensive social welfare programs and cast himself as a champion of the downtrodden, as long as they were the right color. You could almost put it this way: Wallace admitted that whiteness was a crucial and decidedly non-neutral factor in political life, whereas for Trump whiteness is invisible and ubiquitous, like oxygen.

This past year also brought us the curious tale of Rachel Dolezal, the “trans-racial” white woman who headed a chapter of the NAACP in the Pacific Northwest while adopting a black identity. Dolezal may seem like a footnote or a punch line to the more consequential story of race in America, but she carries more resonance the more we think about her and revisit her sincere if narcissistic agony. Anyone of King’s generation would have remembered the controversy around “Black Like Me,” the 1961 book by white journalist John Howard Griffin, who had his skin chemically darkened and spent six weeks living as an ersatz African-American in the Jim Crow South. King almost certainly knew Walter Francis White, the longtime NAACP leader who had fair hair and blue eyes and by his own admission was largely of European ancestry, but who lived his entire life as a black person.

White and Griffin’s stories are different from each other and from Dolezal’s, or from the stories of conflicted or confused racial identity found throughout American history and culture, from Thomas Jefferson’s redheaded slaves to Douglas Sirk’s “Imitation of Life” and William Faulkner’s “Absalom, Absalom” to the career of R&B legend Johnny Otis, who was born as Ioannis Veliotes, the child of Greek immigrants. All of them speak to the paradoxical fact that “race,” at least in the American context, is an arbitrary fiction with no scientific or biological meaning, but a fiction whose truth cannot be denied, that has shaped our nation’s history and defines our individual destiny. It's a story we tell together, with considerable difficulty. But it's not a story we are free to tell by ourselves.