I'm ready for "The X-Files" now: How Mulder and Scully won me over, with a little help from terror and time

Don't call it a conspiracy, but it's no accident that the show that popularized paranoia is reuniting now 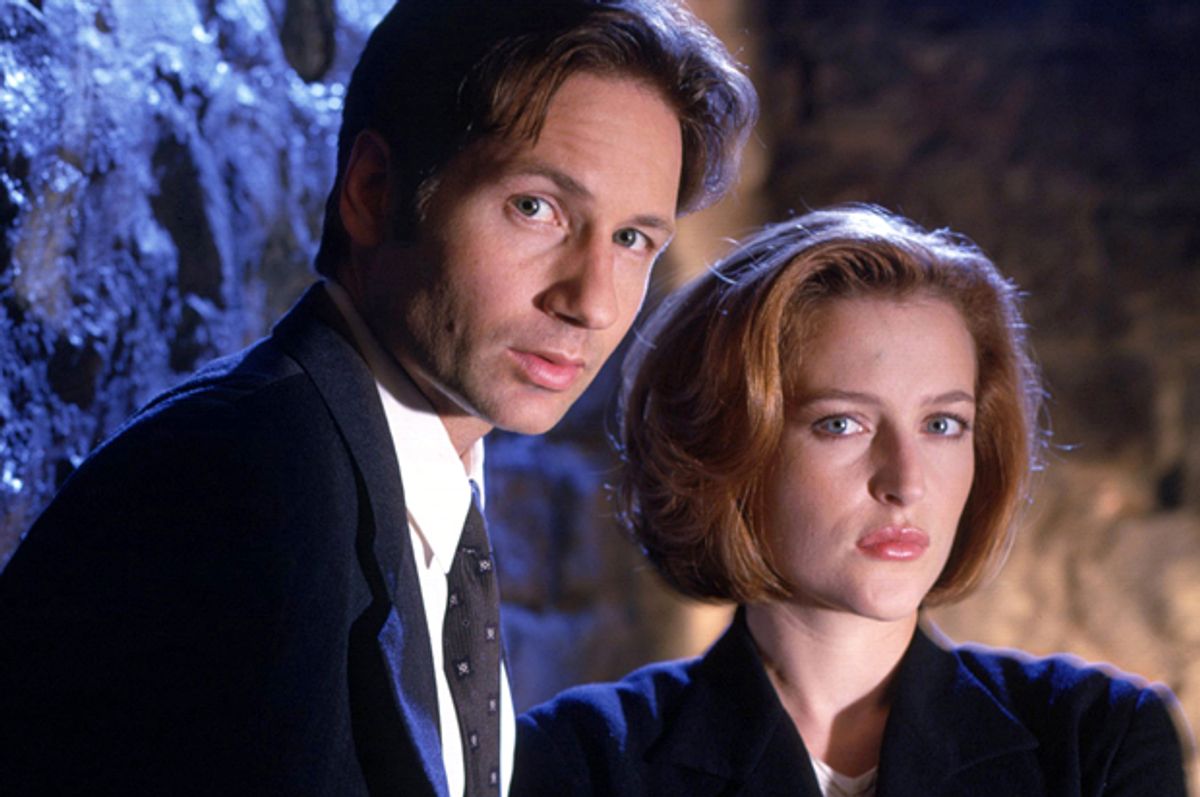 The suspense hit, co-starring David Duchovny and Gillian Anderson as mismatched FBI agents, premiered on Fox on a Friday, Sept. 10, 1993, and that night, decades before the advent of the DVR, I was far too busy to watch.  I was celebrating my 24th birthday, which was not until Oct. 2.

Of course, I became aware that there was a show called “The X-Files” that was something of a to-do, because this was an era when it was harder to avoid a pop phenomenon, an album or a film once it moved to the cultural fore, but I could not have been less interested in it. I was too young and having too much fun. The only X that I cared about was something that we Brooklyn hipsters all called “E” (only cops and housewives on TV called it “X”) and the only file that mattered was the one I used to carve out lines on the top of a hand-drying blower in the bathroom of some graffiti'd Lower East Side bar.

If I happened to catch an episode, and I did watch a few, it was either because I was in the hospital or waiting in a taxi station in Williamsburg (where I lived in a $300-a-month loft on Grand Street …  talk about the supernatural). Maybe I was still in some woman’s apartment after going home with her — on a Thursday. Some Fridays it was on while I was talking about religion or why Jon Spencer Blues Explosion sucked (or were great) in a strange, cramped kitchen with several other young men and women since the Thursday before that. Cocaine, a — not the — drug of choice at the time, did not make me paranoid; in fact, it accomplished the opposite effect. Blow made me 100 percent certain that I was right about everything: politics, sports, music, my own talent. The only truth that was out there was the guy with more coke. I wouldn’t be able to spot a UFO because we had no sky in New York in the ‘90s, anyway, just a banner of filmy, starless blue black tarpaulin (perfect for the flying of black helicopters but fly away, just don’t blow away the pile with your rotors, por favor). A freakin’ werewolf could have been sitting next to me on a stool at the Library Bar on Avenue A, but that too would require looking left or right instead of straight at the cute, blond art student/bartender.

Cut to nine seasons, 202 episodes, and a few dramatized Chupacabra sightings later, and I was no longer in my carefree 20s. Mulder and Scully were gone and so was my youthful bravado: disappeared in an instant like Mulder’s poor sister. My once-flourishing writing career was about as successful as that of the Smoking Man’s.

Post-9/11, which happened some months before the show’s original run ended in the spring of 2002, and it was suddenly a Doggett/Reyes world — I was home every night now behind a double-locked door and inside a pillow fort of my own jitters. Most of my friends had gone off and gotten married, had kids, moved to Seattle or Portland or Los Angeles. New York City was now on perma-terror alert. I owned a fish and two Radiohead albums, but even those didn’t make sense like they used to. But that was OK, because I had my new friend The Internet, and sometimes he brought his pal Valium and her buddy cheap red wine — red the color of Gillian Anderson’s flowing hair. We hung out. Together, we scurried into various rabbit holes trying to figure out whether Sirhan Sirhan was brainwashed into becoming a Manchurian candidate, why Sharon Tate was present at RFK’s last supper, whether or not the Loch Ness Monster photo was doctored and if my phone was being tapped (as if anyone would tap a flip phone). I used to rock well; now my life felt like that video by Rockwell. I drew the line here and there. I was not a truther, I was a Tsuris-er. Everything worried me without inspiring the commitment of a fanatic.

Now, I am in my 40s and I’ve gotten a little bit of a handle on my nerves. I still won’t walk under ladders and I throw salt over my shoulder. I carry a medical ID and pepper spray. If I do drugs, I feel at the very least guilty about it, but the king-hell hangover is enough penance. I am … a cautious, lonely gun man. And I have caught up, thanks to DVDs and Netflix, on the back 202, largely because of fuck-all else to do with myself.

So … this coming weekend when “The X-Files,” now iconic, returns as a six-part miniseries gift to Comic-Conners everywhere (after one failed spinoff, one excellent Catatonia song and one iffy movie in which a bee ruins the long-awaited kiss between Mulder and Scully, possibly the last act of a live bee on this planet, not to mention the entire run of “Californication” in which Duchovny plays a debauched L.A. writer named Bukowski Sadness … I mean Hank Moody), I am finally ready to be a real fan. We are meeting in the middle, Benjamin Button-style, “The X-Files” and I.

I not only want to believe now, but in my dreadful 40s, scorched of anything that can effectively numb me or be identified even under a top secret government microscope as fun, I admit it — I need to.