Ronald Reagan made it all worse: How Republicans -- the real party with their hands out -- convinced white America that government was out to get them

Anti-government diatribes from the prime beneficiaries of government programs? How the GOP lies to white America 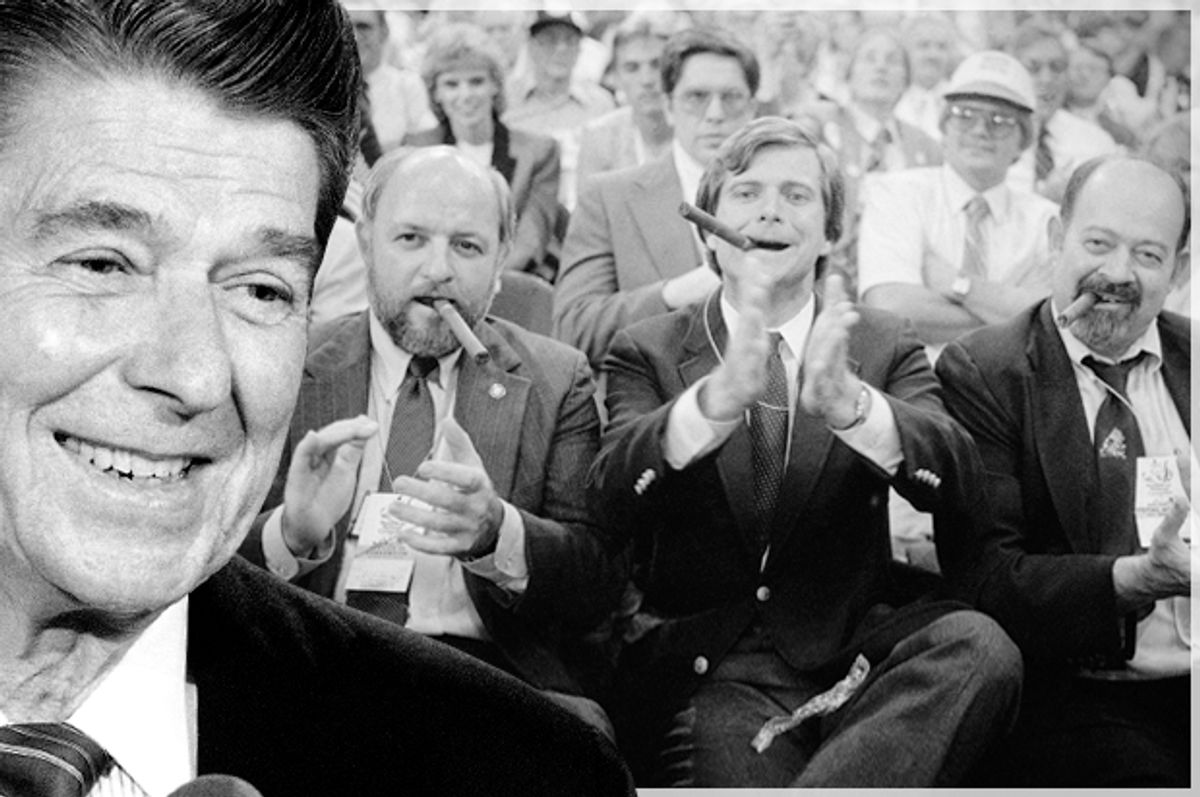 The men occupying Oregon’s Malheur National Wildlife Refuge represent a bizarre contradiction. They howl about the overreach of the federal government, but they are among the biggest beneficiaries of government programs. For 150 years, their brand of logic has pitted individuals against an activist government, Western cowboys against black Americans, and the West against the East. Behind their protest is a uniquely American story that welds racism to anti-government sentiment. It comes from a peculiar coincidence of timing: that Reconstruction after the Civil War coincided with U.S. expansion into the American West.

Real “patriots,” the Bundys claim, stand against a behemoth government that has grasped their lands and their rights. America, after all, is made by ambitious individuals working their way up. A government that promotes social welfare or regulates business destroys the American system because it both limits a man’s ability to make money and requires tax revenue. Those taxes strike at the very heart of individualism because they redistribute money from hard workers to lazy people.

Ammon and Ryan Bundy and their compatriots are quite clear about exactly who those lazy people are. The younger Bundys’ father, Cliven, the Nevada rancher who started an armed standoff with government officials in 2014 over grazing rights, had plenty to say about the “Negro” who lived in government housing and “didn’t have nothing to do.” African-Americans’ laziness led them to abort their children and send their young men to jail. Bundy wondered: “are they better off as slaves, picking cotton and having a family life… or are they better off under government subsidy? They didn’t get no more freedom. They got less freedom.”

And yet, the Bundys are perfectly comfortably taking money from government programs themselves. Aside from animal kill programs that protect herds, drought relief payments, and the 93 percent discount at which the government assesses grazing fees, Ammon Bundy borrowed more than $500,000 from the federal government through a loan guarantee program for small businesses. Ammon Bundy’s father, Cliven, owes the government more than $1 million in grazing fees for running his cattle on public land. No matter how you slice it, taxpayers have subsidized the Bundys.

Observers have made much of this obvious contradiction. But it is not a sign only of the Bundys’ lack of self-awareness, or even simply of white supremacy. It is the intellectual formula that has driven American politics since 1980.

That formula was laid down immediately after the Civil War. In 1865, the South was so devastated by the war that Southerners, white and black, were starving. To provide rations and medical care, and to place homeless Southerners on farming land, Congress created the Bureau of Refugees, Freedmen, and Abandoned Lands. To emphasize that government aid would be temporary, they placed what became known as the Freedmen’s Bureau within the War Department. In summer 1865, military officers distributed 150,000 rations, a third of them to white people. But the agents also took on an unexpected role. Southern states refused to let ex-slaves testify in court, leaving them to the tender mercies of angry white Southerners, who cheated, beat, raped and murdered them. So Freedmen’s Bureau officers began to hear the cases that pitted black and white Southerners against each other.

While agents often forced black people back to work for abusive employers or demanded subservient behavior, they decided cases in favor of ex-slaves about 68 percent of the time. So Southern Democrats rewrote history. They had not fought the Civil War over slavery after all, they insisted. They had fought it to stop a huge government bureaucracy from forcing its way into their homes and regulating the way they treated “their people.” They had fought, they now claimed, not for slavery, but for states' rights.

When Congress tried to expand the Freedmen’s Bureau the following year to enable it to provide education for poor Americans of all races, President Andrew Johnson added the final ideological piece to the Democrats’ attack on an activist government. That piece was taxation. During the war, the Republican Congress had created the nation’s first national taxes, including the income tax. Johnson vetoed the bill expanding the Freedmen’s Bureau on two grounds. First, although the schools in the bill would have disproportionately helped whites in the border states, Johnson claimed that it provided benefits for African-Americans that had never been accorded to white people. Second, he explained that the bill would create an army of officials that would harass Southern whites, while the taxes necessary to support them would impoverish hardworking white people.

This formula—that an activist government sucks white tax dollars to provide for lazy minorities—has been sold to voters ever since.

It caught on largely because of the odd happenstance that it coincided with the rise of the American cowboy. During this very moment, the cattle industry was taking off on the Western plains. Cowboys tended to be former Confederates who were dirt poor and good with a horse and a gun. Their dirty, hard, ill-paid and dangerous lives mirrored those of Eastern industrial workers, but Southern Democratic newspaper editors grabbed hold of the idea of the free and independent cowboy as the embodiment of American individualism. Cowboys, they said, were the very opposite of the ex-slaves the government was coddling. Cowboys were hardworking young men who asked nothing of the government.

The reality, of course, was that the cattle industry depended almost entirely on the American government. The Army protected herds and cattlemen against Indians, Congress funded the railroads that moved cattle to Eastern markets, and Indian agents bought cattle to fulfill the ration provisions of treaties. Cattlemen, in short, received massive government subsidies. But the image of the Western cowboy as a hardworking man who asked only to be left alone got traction among Southerners and Northern Democrats who hated the idea of black rights, and who loathed the Republicans’ activist government that was trying to enforce those rights.

By the 1870s, ex-Confederates had taken their support for Western individualism a step further. They insisted the federal government was actively persecuting Western individuals. Their hero was Jesse James, the former Confederate guerilla-turned-criminal. When a Republican state government in Missouri refused to let ex-Confederates sit on juries or practice law, Democrats used the fugitive James to bludgeon their political opponents. James was “an angel of light,” as one said, who wanted to turn himself in to authorities, but could not because he would not get a fair trial in a courtroom full of his political opponents. He was a good man, the story went, but the government was forcing him into criminality. And then, the governor of Missouri cut a deal with Robert Ford to kill James. That a government official had colluded to murder a citizen added fuel to the idea that Westerners were in danger from an overweening government.

The political construct that lionized Western individuals and demonized an activist government, a government that apparently helped minorities, was a product of a peculiar moment in American history. Neither the moment nor the ideology lasted. The political construct that idealized cowboys fell into disrepute during and immediately after the New Deal. In those years, Americans turned away from Western individualism and toward the idea of an activist government. Westerners and Southerners both, after all, were suffering from the Dust Bowl and the boll weevil. They wanted government programs even more than Easterners did. But in the 1950s, the Movement Conservative war on the New Deal resurrected the post-Civil War political cliché.

Since the Brown v. Board of Education decision of 1954, Movement Conservatives have tapped into the idea that an activist government redistributed wealth to lazy minorities. But they have also pushed hard on the idea that true Americans are Western individualists. Arizona Sen. Barry Goldwater launched this association in 1964 by dismissing Brown v. Board as governmental overreach and fictionalizing his wealthy upbringing as a hardscrabble Western frontier story; Ronald Reagan made it even more explicit by contrasting his image of the Welfare Queen with his own cowboy hat and Western ranch. And yet, the Goldwater and the Reagan stories mirrored those of the historical Western individual: their regions, and their own families, prospered only when government contracts poured money into their communities. To them, there was no contradiction between their championing of individualism and benefiting from government largess.

According to Movement Conservatives, Americans who believe in individualism want nothing from the government, and thus, unlike grasping minorities, they are the nation’s true patriots. The government should do nothing for "lazy black Americans," who only want an un-American redistribution of wealth through taxes. But, paradoxically, the government can—and should—use tax money to help America’s individualists.

This is the peculiar contradiction that defines today’s politics.

Confederates, cowboys, anti-government diatribes from people who are prime beneficiaries of government programs … thanks to the Bundys we are celebrating the 150th anniversary of Reconstruction by reliving it.