Americans are "getting ripped off" on health care, Sanders exclaims in debate clash with Clinton

Sanders calls for Medicare-for-all, like almost every industrial country in the world; Clinton says it's too soon 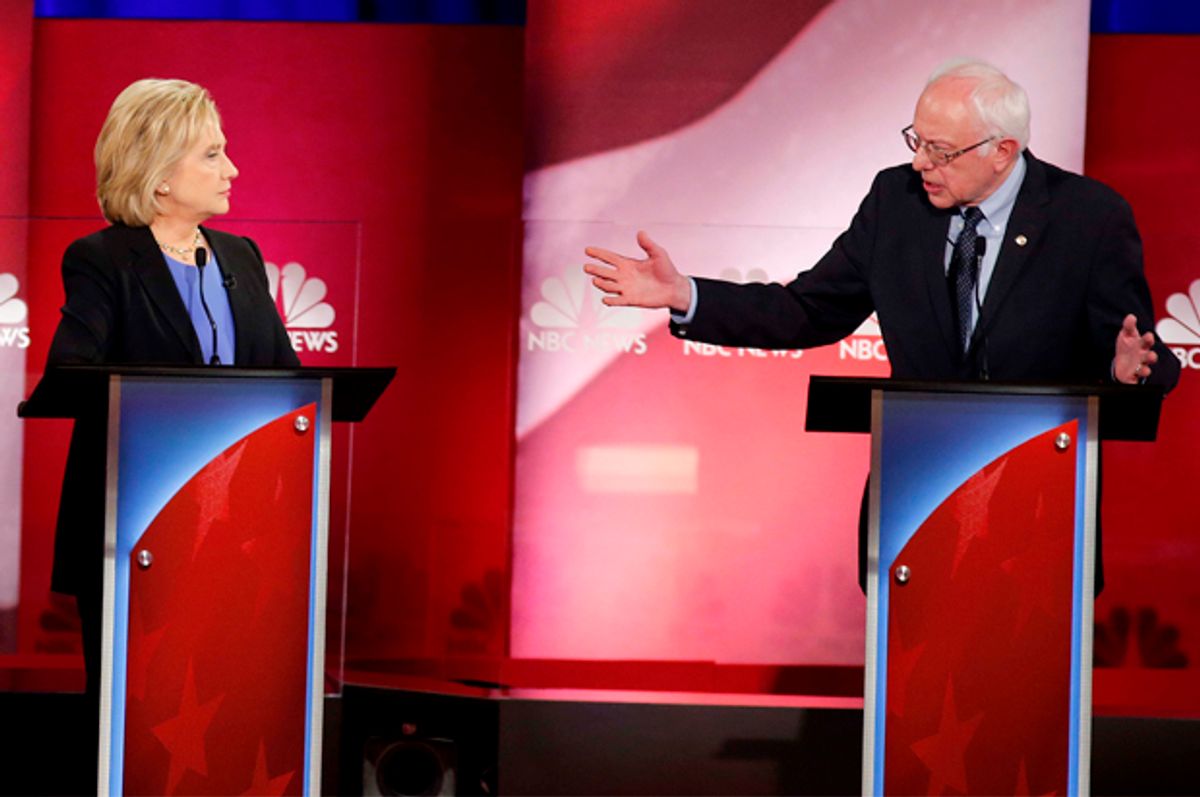 Health care is one of the areas in which presidential candidates Bernie Sanders and Hillary Clinton differ the most. In the fourth Democratic debate in South Carolina on Sunday night, sparks flew as the candidates pushed for their conflicting views of U.S. health care policy.

Sanders has called for Medicare-for-all. Before the debate, the Sanders campaign released a plan detailing what universal healthcare in the U.S. could look like.

In recent days, the Clinton campaign has attacked Sanders for this policy, claiming that his proposals will decimate existing U.S. health care systems. Sanders says this is an unfair and even "nonsensical" distortion.

"What her campaign was saying, Bernie Sanders — who has fought for universal health care for my entire life — he wants to end Medicare, end Medicaid, end the children's health insurance program -- that is nonsense," the Vermont senator said.

"What a Medicare-for-all program does is finally provide in this country health care for every man, woman and child as a right," Sanders said.

"The truth is that Frank Delano Roosevelt, Harry Truman, do you know what they believed in? They believed that health care should be available to all of our people," he added.

The moderators of the debate spoke of Sanders' proposal as if universal health care is an extreme policy, yet every industrialized country in the world has it.

Virtually all European countries, much of Latin America, Russia and even Saudi Arabia provide universal health care. The U.S. is the only country in the OECD aside from Mexico that does not guarantee health care for all citizens.

Although Clinton has recently vociferously attacked Sanders' proposal, she claimed in the debate she is "absolutely committed to universal health care." Clinton argued what differs is her approach to health care.

The former secretary of state said she sees Obamacare as a step on the path toward universal health care. She steadfastly defended it, characterizing it as "one of the greatest accomplishments of President Obama."

"I don't to want see us start over again with a contentious debate. I want us to defend and build on the Affordable Care Act and improve it," Clinton stated in the debate.

"There are things we can do to improve it," she conceded, "but to tear it up and start over again, pushing our country back into that kind of a contentious debate, I think is the wrong direction."

But the senator argued the ACA does not go far enough. He levied several critiques at the program, noting that it still has left 29 million Americans without health insurance, and that it still leaves Americans who have it "with huge copayments and deductibles."

"We are paying the highest prices in the world for prescription drugs, getting ripped off," Sanders continued. "We are spending far more per person on health care than the people of any other country."

"Tell me why we are spending almost three times more than the British, who guarantee health care to all of their people," he said. Sanders pointed out that the U.S. pays more than Canadians on health care, and 50 percent more than the French.

Sanders argued his proposal would "provide health care to all people, get private insurance out of health insurance, lower the cost of health care for middle class families by 5,000 bucks."

Clinton was suspicious of Sanders' policy. She pointed out that, over a period of years, Sanders has raised nine bills in an attempt to move toward universal health care, but has faced heated opposition from both parties. Clinton called for a more incremental approach.

The self-declared democratic socialist Sanders, on the other hand, insisted "We need a revolution in this country in terms of mental health treatment" and health care.

"People should be able to get the treatment that they need when they need it, not two months from now, which is why I believe in universal healthcare, with mental health a part of that," Sanders said.

Obamacare has been a heated issue among the American left for some time now. Although both Clinton and Sanders defended the legislation, and while it is seen as a milestone victory of the Obama administration, the Affordable Care Act is, in fact, closely based on legislation proposed by 2012 Republican presidential nominee Mitt Romney.

Maryland pediatrician Margaret Flowers, an activist in the advocacy group Physicians for a National Health Program and one of the leading voices in the movement for universal health care in the U.S., has gone so far as to argue Obamacare "may be the biggest insurance scam in history."

"The industries that profit from our current health care system wrote the legislation, heavily influenced the regulations and have received waivers exempting them from provisions in the law. This has all been done to protect and enhance their profits," she says.

Sanders has argued these problems can be circumvented by moving toward a system of universal health care, which every other major country has. Clinton has argued Obamacare is a step forward.

For years, a majority of Americans have wanted universal health care. In early 2015, five years after the single-payer system was scrapped from Obamacare debates, more than half of Americans said they still support it.