Birds are going extinct: Entire species are hanging on by their wingtips

Deforestation and the pet trade have ravaged avian populations, and the consequences for mankind could prove dire 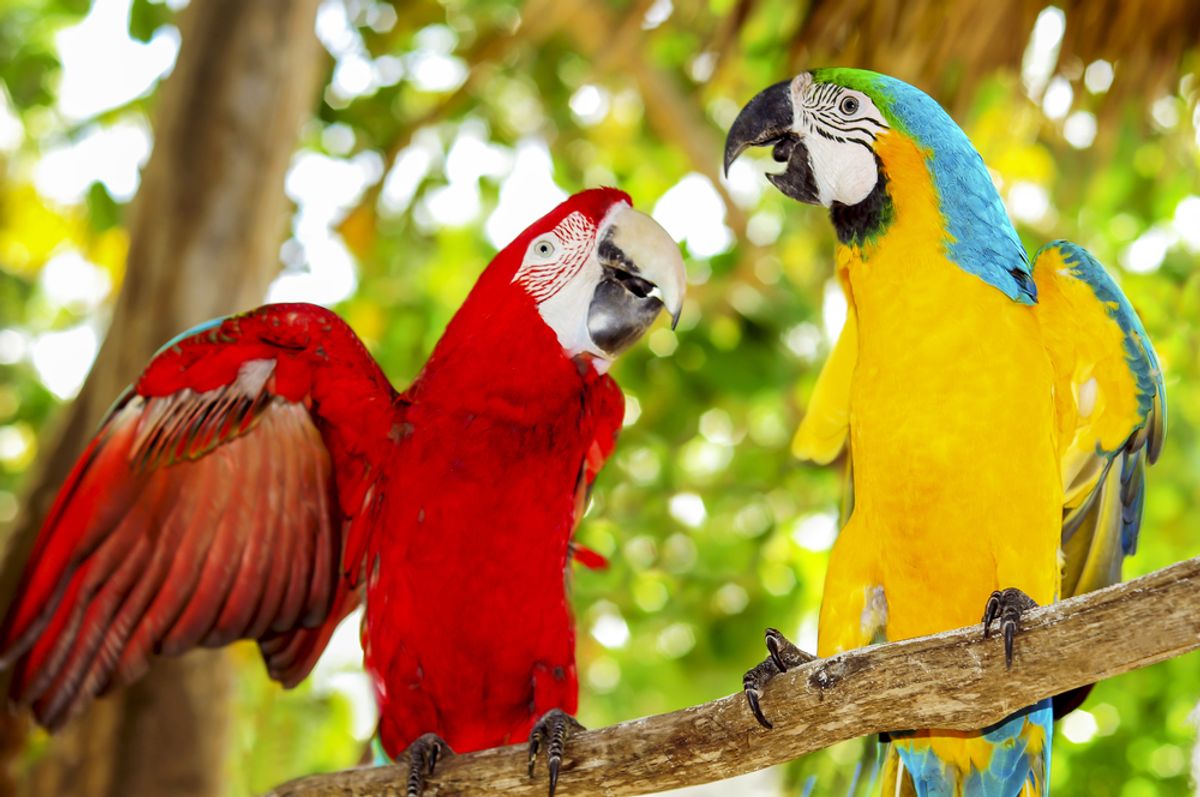 The following is an excerpt from "The Annihilation of Nature: Human Extinction of Birds and Mammals" by Gerardo Ceballos, Anne H. Ehrlich, and Paul R. Ehrlich. It originally appeared on Earth Island Journal.

A visit to the California Academy of Sciences, located in San Francisco’s Golden Gate Park, speaks volumes about the disaster that has befallen birds with the spread of humanity. A maze of narrow corridors in the scientific collections leads an explorer to the Ornithological Collection. There you will find a cabinet with a sign: “Extinct Birds.” If you look inside, you’ll experience a dreadful moment as you take in the sight of specimens of species that no longer exist. Your eyes will move from the imperial woodpecker and the passenger pigeon to the Guadalupe Island petrel, among many others. Each is carefully preserved in death – an ironic twist. We failed to preserve them while they lived, not so very long ago. Dread fades to sadness as your eyes linger on these inert specimens, the last samples of what once were animated creatures. Numbers have a way of numbing the mind, but seeing the remains of so many lost species of birds should touch a nerve and prompt a pledge.

America’s conservationist president, Theodore Roosevelt, knew what it meant to lose a species of bird. He once famously stated,

The extermination of the passenger pigeon meant that mankind was just so much poorer; exactly as in the case of the destruction of the cathedral at Rheims. And to lose the chance to see frigate-birds soaring in circles above the storm, or a file of pelicans winging their way homeward across the crimson afterglow of the sunset, or a myriad terns flashing in the bright light of midday as they hover in a shifting maze above the beach – why, the loss is like the loss of a gallery of the masterpieces of the artists of old time.

Unfortunately, Roosevelt’s fears became realities  all too often as the twentieth century unfolded. Today thousands of bird populations and many entire species hang on by their wingtips. Large portions of our avifauna seem destined to disappear in this century  if we continue with business as usual, as increasing climate disruption adds to the effects of habitat destruction, hunting, and other assaults humans have imposed on the world’s fauna. Beyond the species themselves, we will also lose the important roles birds play in our lives, from giving us esthetic pleasure to eating various insects that plague people. Among birds we have lost in more recent times or are now close to losing, is the Spix’s macaw.

Midnight for the Macaws

The last known free-living individual of Spix’s macaw was seen in Brazil in the year 2000. The Spix’s macaw got its common name from its discoverer, a German naturalist named Johann Baptist von Spix. Over-harvesting has been the main culprit in the demise of this species. But people generally didn’t eat Spix’s macaws; they captured them from the wild to be sold as house pets because of their great beauty and rarity. Even when the macaws were on the brink of becoming extinct, many reports indicate that capturing and sales continued until none were left to be trapped, caged, and sold. The species is now presumed to be extinct in the wild.

Genetic evidence supports the view that, even before the wild birds were turned into pets, Spix’s macaws survived in nature in extremely small numbers. They were predominantly found in woodlands along watercourses in otherwise treeless landscapes (so-called gallery forests) that were dominated by caraiba (trumpet) trees in which the birds nested. They usually fed on the fruits of two plant species belonging to the family Euphorbiaceae. The demise of the wild Spix’s macaws at the hands of the pet trade was accelerated by the loss of the forests and perhaps by the shooting of wild birds.

Another possible human-fostered problem for the macaws was the invasion of their native habitats by aggressive Africanized honeybees. Honeybees are native to Africa, where they have long been subject to nest-raiding by mammals and birds for their honey and wax. People domesticated bees centuries ago, producing a relatively calm “Italian” strain, which has been introduced over much of the world, including in Brazil, where it was not a great producer of honey.

A well-known scientist, Warwick Kerr, thought that by hybridizing African and Brazilian bees he might be able to create a strain that was both calm and yielded a rich lode of honey. But before Kerr could do the experiment, a Brazilian beekeeper visiting Kerr’s lab deliberately allowed some of the African bees to escape. That beekeeper’s motives are unknown, but besides possibly hastening the exit of Spix’s macaws, he has been responsible for the deaths of numerous human beings.

In a poignant twist, the last known wild male Spix’s macaw was discovered in 1990 paired with a female, but the female was not of his own species. The male Spix was trying to reproduce with was a female blue- winged macaw. The mismatched couple did mate, and she even laid eggs, but, as one might expect, the eggs were infertile. Conservationists tried to get the male hitched to a female Spix’s macaw by releasing  a formerly captive female Spix’s into the territory of the interspecies pair, but the male showed no interest in her. Unhappily, she collided with a power line and disappeared, presumably dying from her injuries. This episode is an example of the difficulty of acclimatizing captive birds and successfully re-establishing species in nature. The “odd couple” presumably remained paired until January 2000, after which they too disappeared.

More than seventy Spix’s macaws now live in captive breeding programs run by conservationists. To counter the risk of losing genetic variability due to inbreeding, individuals have been exchanged between various institutions in an effort to maintain their genetic diversity. But conservationists are afraid to release the macaws, worried that the birds might end up being trapped and sold as pets. Several captive macaws are currently held by the Al-Wabra Wildlife Preserve (AWWP), far from their native Brazil in the Middle Eastern country of Qatar. In 2009 AWWP announced that it had purchased 2,200 hectares (5,437 acres) of land in Brazil at the site where the last wild Spix’s macaw had been observed. In a careful, step-by-step process, domestic livestock are first being removed from the site to facilitate habitat recovery, especially regeneration of the trees essential to the birds’ breeding. This commendable effort demonstrates how much money and effort are required to give a single bird species a chance and how much easier it would have been simply to protect the wild populations that once existed.

Lonesome as the last wild Spix’s macaw was, its plight has been shared by virtually all the seventeen other species of macaws. These gorgeous, long-lived, highly social big parrots are all threatened by deforestation and capture for the pet trade. Hyacinth macaws, the giants of the group, are down to a few thousand individuals. Their close relative, Lear’s macaw, is now represented in the wild by only one hundred or so birds in the interior of the northeast bulge of Brazil, where the stands of palm trees on which they depend for food have been reduced to tiny remnants. Fortunately, though, there is great interest in both species, and local conservation groups and landowners are working to keep them wild.

Is it really so important to have a bird in one’s apartment in New York or Manaus or Hong Kong that we as a society are willing to permit unregulated, or barely regulated, trade in avifauna? The problems that vex macaws are human problems. We seem to value someone’s right to have a pet, or to own a patch of land, or to harvest timber over our ethical and self-interested responsibility to protect nature. Then, when a species reaches a crisis level, we sometimes react, spending ten or a hundred times what we would have needed to spend had we just strongly enforced a policy that simply said no, stop, leave this species in peace. Even better, if we could just adopt a global policy of humanely and fairly limiting the scale of the human enterprise, gradually reducing the population size of Homo sapiens, curtailing overconsumption by the rich (while increasing needed consumption by the poor), then we might leave some room for the natural systems all humanity depends on.

An excerpt adapted from The Annihilation of Nature: Human Extinction of Birds and Mammals By Gerardo Ceballos, Anne H. Ehrlich, and Paul R. Ehrlich”?