Let's not reassess the Eagles now: Glenn Frey's death makes it too soon — and too awkward

Love the Eagles or hate them, nobody benefits from a sentimental revisiting of a band so soon after a founder dies 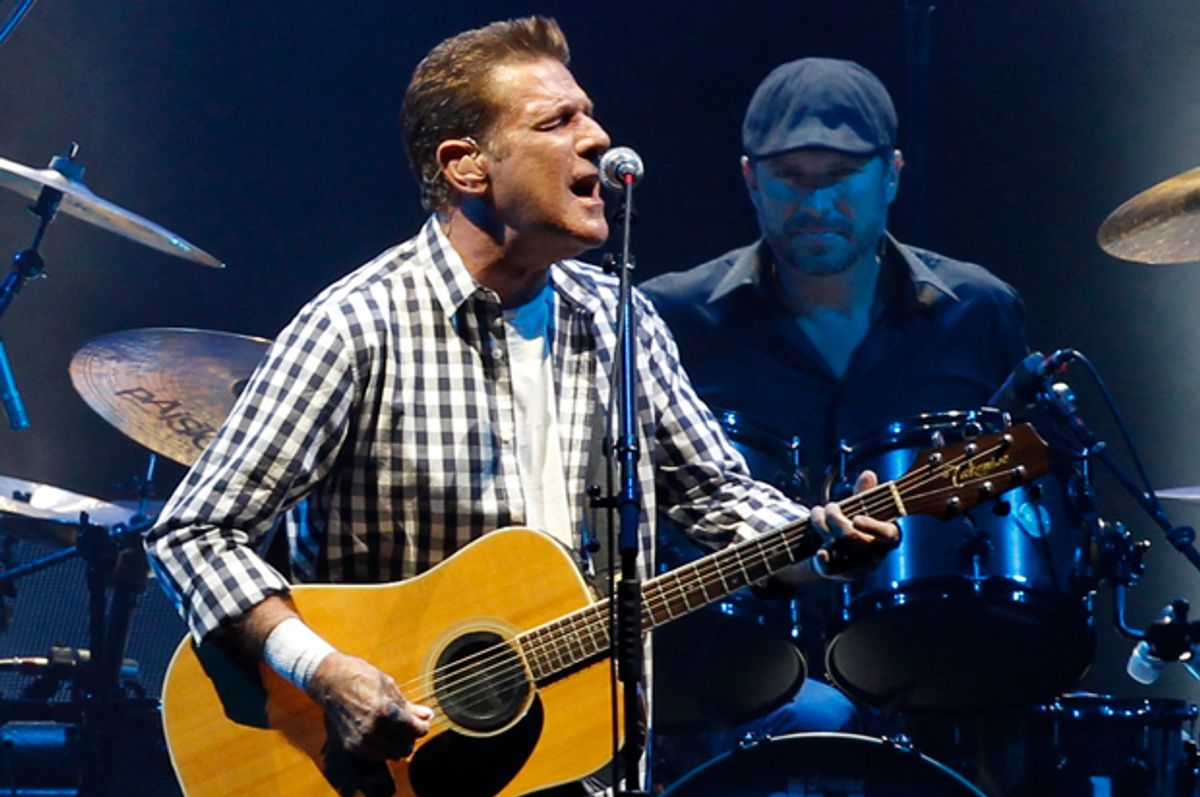 With the death of Glenn Frey, people are talking, Tweeting, praising, and damning: The immortality or worthlessness his old band has become the subject of Facebook, Twitter, and private conversations. Were the Eagles any good? It’s natural for members of the press and media to ask that question, but how to answer it? Here’s a band that sold an enormous number of records, but that many serious music fans think took styles and ideas that other musicians, most of whom never saw the same riches, originated. During their ‘70s heyday, the Eagles were known as being arrogant enough that they stood out even in a decade of decadent excess. The Dude – the “Big Lebowski” character played by Jeff Bridges – despised them, preferring Creedence Clearwater Revival.

“With the death of Glenn Frey, it's time to reassess the Eagles,” reads the headline of a story in The Guardian today. “Frey’s band had the second-bestselling album of all time, but to many (including the Dude) they were a joke, thanks to his cockiness, excess and soft melodies.”

The story lays out the cases pro-Eagles:

Frey didn’t have [Jackson] Browne’s flair for words, but his melodies were another story. By then, Frey and Don Henley had stopped singing backup for Ronstadt and decided to team up with Randy Meisner and Bernie Leadon to form the Eagles. They began to write, and write and soon became responsible for some of the most popular melodies of the 20th century: Take it Easy, Desperado, Lyin’ Eyes, Hotel California, Already Gone – all bona fide hits. Each of the members’ voices were as distinct as they were beautiful. Frey’s had smooth underbelly with a slight twang at the end of each phrase, fitting perfectly between the rock and country genres the band balanced so well.

It describes the case against the band:

Many thought of the Eagles as country rock’s resident bros. They were the poster boys for cliched rock’n’roll hedonism, with no shame about hollering how much money they were making, drugs they were taking or groupies they were sleeping with. This, understandably, irritated a lot of people, particularly fans of the Southern California/Laurel Canyon sound in which the band was rooted. What about Crosby, Still and Nash and Joni Mitchell and the Mamas and the Papas? Those musicians were doing it for the love of art, not for the love of cash.

And 2013 old Salon article, “Quit defending the Eagles! They’re simply terrible,” is going around today. I know that if I wrote a piece like it, it would get vastly more attention than the story I’m writing this minute. It’s tempting to try to come up with something definitive to either champion or banish the work of this guy who just passed away. The Internet rewards extreme angles and contrarian arguments, so I'm tempted to jump on one side of the argument, and push hard.

But it’s actually the worst time to try to assess Frey and the music of the Eagles.

Unless someone is morally despicable, his or her death is always regrettable. How many people can write about an artistic career in the face of that? (Okay, I know a few, professional critics of great discipline, but the number is small.) Given how many people will be opining on the Eagles today, a lot of warm (and cold) sentiments will come from a place that has to do with the moment itself. (I’ll point out here that big newspapers tend to have obits of major figures filed away ahead of time – a smart idea for a lot of reasons.)

Human beings are tribal, and the Gram Parsons/ Gene Clark/ The Band tribe and the Eagles tribe will never get along or respect each other much. But with a death, we need a kind of cease fire — especially on the Internet, which rewards overstatement.

So let’s hold off on the career assessments for now, can we?

A man has died, and his friends and family mourn. Fans are hurt, doubters are largely unmoved. Can everyone be decent about this for a minute, and stay away from the definitive statements for at least a few days?