Ted Cruz gets even more slimy: A new campaign-finance controversy should derail his campaign—but it won't 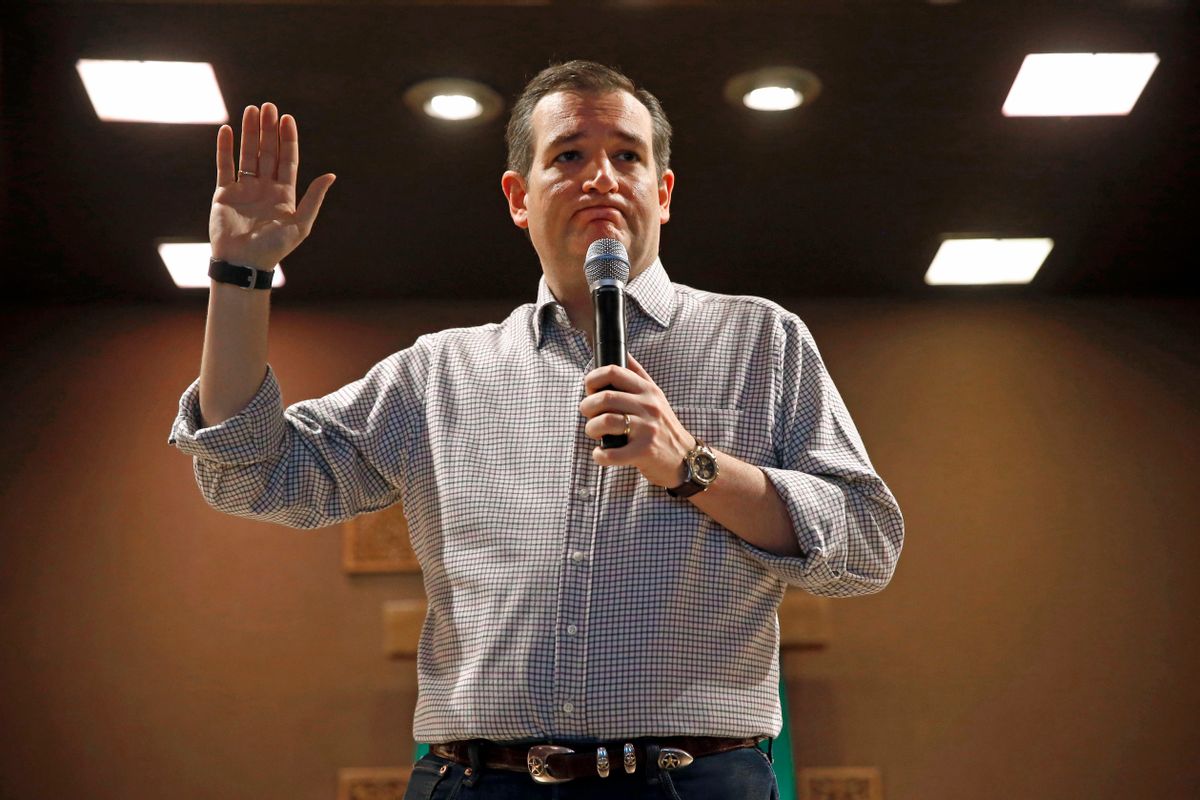 Whoops, it looks as if Ted Cruz’s “paperwork problems” over loans he took out to boost his 2012 Senate campaign might be even worse than previously thought.

A day after the New York Times reported that Cruz never disclosed a $500,000 loan he took out from Goldman Sachs during the Republican primary that year, the senator sent the Federal Election Commission a letter admitting the existence of yet another $500,000 loan which he also took out that year for his campaign. This second loan was a line of credit from Citibank. The Times reports that the source of collateral for this second loan is unclear, but so what? Cruz was a lawyer making a million dollars a year and running for the Senate, while his wife was a Goldman Sachs executive with a six-figure salary. Frankly, from Citibank’s point of view, a line of credit for the campaign must have looked like a good investment.

While this story was coming to light, Cruz was having his “You’re no Jack Kennedy” debate moment with, of all people, Donald Trump, who managed to make the Texas senator look like even more of a smarmy jackhole then usual -- and over the issue of 9/11, the cloak in which Republicans have often wrapped themselves in when it served their electoral purposes.

In a sane world, these dust-ups would at least blunt a little of the momentum Cruz has been building over the last few weeks as he emerged as the most viable of the non-Trump GOP candidates. After all, being able to secure a million dollars’ worth of loans at three percent interest from two brokerages (one of which, Goldman Sachs, employs Cruz’s wife Heidi in an executive position that pays her a six-figure salary) does not exactly fit the image of the devout, Middle American everyman that Cruz has cultivated during his brief political career.

But we do not live in a sane world, at least not as far as the Republican primary is concerned. So unlike some of my colleagues, I am highly skeptical that these attacks are going to mean much.

For one thing, attacking the godless, abortion-loving, gun-hating cultural Gomorrah that is New York City is catnip to conservatives. Sure, plenty of conservative media is based there. Sure, thousands of conservatives live and work there, presumably partaking in all the fabulous restaurants, great theater, and interesting culture the city has to offer, but it’s not as if they enjoy it. Fox News hosts and other wealthy conservatives regularly promise to flee the high-tax hellhole for friendlier, more conservative, more authentically American climes as soon as their contracts are up or their kids graduate high school.

The only good New Yorkers are the hard-working blue-collar ironworkers and cops and firemen who populate the outer boroughs (and only join unions because they are forced to by corrupt Democratic political machines.) Which brings us back to Cruz, who on Friday put out this statement “apologizing” for his criticism of “New York values” in Thursday night’s debate:

In the annals of dickishness, this statement will go down as an all-time classic. In the annals of Republican politics, it will go down as a very canny move. After first dividing all of New York from American values, Cruz has now divided the “good” New Yorkers – the blue-collar working class, the hard-working small businesspeople, the brave public servants – from the “bad” New Yorkers who populate the liberal media and flip brownstones for millions of dollars and have gentrified Brooklyn. See, “good” New Yorkers, Cruz is saying. You are just like the real Americans who live west of the Hudson. You just labor under an occupation of horrid liberalism. And I, Ted Cruz, will be your salvation from the godless gun-grabbers who rule your state!

He will be helped in this effort by the tribalism of our current politics, which allows conservatives to shake their fists at Wall Street banks over their crimes while praising, say, the Republican Supreme Court for throwing out any restrictions on political contributions from those same banks through the vehicle of Citizens United. It allows Republicans to criticize Wall Street banks while embracing a candidate whose wife collects a six-figure paycheck from one of them, or driving Donald Trump, the New Yorker’s New Yorker, to the top of its field of candidates.

This is all such a cynical play by Cruz that one thinks he must be privately shaking his head and laughing at the fact he is pulling it off. Unfortunately for the rest of us, he might be laughing all the way to the nomination.