The GOP's Obama dogwhistles are out of control: How Trump, Christie & Cruz have sunk our discourse to new lows

At last week's GOP debate, the candidates trotted out coded signals to their wing-nuts supporters with abandon 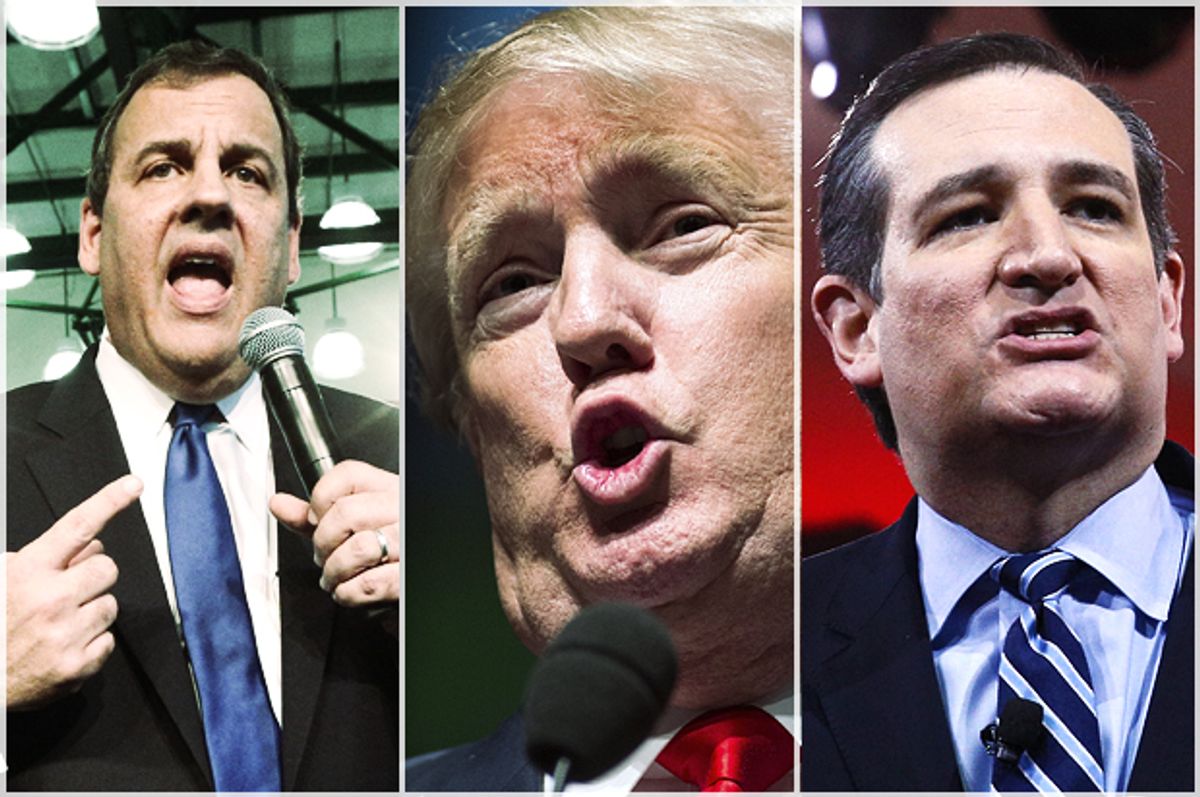 Much has been said on the left about both the knee-jerk rhetoric and simplistic policy proposals routinely blurted by the Republican presidential hopefuls. In reality, it's more a reflection of the naïveté and ignorance of the GOP base, with the most successful candidates simply pandering to the narrow-minded worldview of their voters.

There's no other way to explain the renewed dogwhistle attack against President Obama as an entitled little kid. It's both a not-so-subtle hint at calling Obama a "boy," but it also characterizes him as being too waif-like and spindly to handle the rigors of the job.

While fetishizing the Second Amendment, Christie said the following:

The American people have rejected your agenda and now you're trying to go around it. That's not right. It's not constitutional. And we are going to kick your rear end out of the White House come this fall.

Nevertheless, the fact remains that Chris Christie, who once bullied a New Jersey teacher on the boardwalk while eating a tasty ice cream cone, thinks it's acceptable to publicly call the commander-in-chief of the world's most powerful military, as well as the first African-American president in American history, a "petulant child."

This is the shit-eating level of Republican presidential campaign discourse. Again, it's no longer just the purview of bloggers or Twitter trolls, but now also legitimate presidential candidates on national television.

After more or less referring to Obama as "boy," Christie inexplicably followed up by saying, "We're not against you. We're against your policies." Yes, which is why Christie, seconds earlier, compared Obama to a spoiled infant. The statement becomes even weirder when you consider that, sure, Christie is against Obama's policies -- except when governors like himself or Bobby Jindal or Greg Abbott need Obama and his big, bad federal government to rescue their states from natural disasters.

Christie wrapped up by vowing to kick Obama's butt out of the White House in November. A few things here. Firstly, as "SNL" adroitly observed this weekend, Obama is willingly leaving office after being elected to two terms by handsome margins. We're to believe the American people "rejected [his] agenda" by electing him to the highest office in the land. Twice. He's not running again, so the Republicans aren't kicking anyone out of the White House this time. Secondly, the president leaves office in January, 2017. Not November, 2016.

To summarize, Christie thinks Obama is a spoiled baby and the Republicans are simply going to whip him out of the White House. But he's totally not against Obama. Just his policies. Uh-huh.

This is how insanely disrespectful, amateurish and vulgar the top-shelf Republicans have become in the age of Trump. Imagine if John Kerry had merely hinted at this line of attack against George W. Bush in 2004. Hell, the Dixie Chicks, who had nothing to do with politics, said they were ashamed to be from the same state as Bush and, for their frankness, they were publicly excoriated and their albums burned by hoards of yokels who, 12 years later, think Obama is an impeachment-worthy man-child.

Worse, the second place Republican candidate and sitting U.S. Senator from Texas, Ted Cruz, said during his closing remarks, "Donald is right that China is running over President Obama like he is a child." To be fair, Cruz said China is treating Obama like a child. He didn't directly say Obama's a child. He said he's acting like a child in the eyes of the Chinese. A distinction, yes, but he's still saying it, and his voters are hearing "Obama equals child."

Donald Trump has opened the door to all of this. While attacks on Obama's ethnicity and, to a lesser extent, his masculinity have been gurgling at the talk radio and internet-commenter level for years, Trump has made it easier for A-list Republicans to go there, too. After several decades, Lee Atwater's infamous observation that Southern Strategy racial attacks have to remain coded, the GOP has begun to dispense with the subtleties. Perhaps they're getting in their final licks before Obama recedes into history. Or perhaps it's symptomatic of the Republican Party's continued descent into the realm of second-rate churlishness. It seems as if anything goes. Consequently, our discourse will continue to decline into flame-war tastelessness, with the modern GOP leading the way.

And it's chiefly because Republican disciples, suffering from eight years of Obama Derangement syndrome, believe it and so they need to hear repeated to them by their heroes.

One last thing: While we're talking about childish behavior, what kind of example are Cruz and Christie setting for kids and teenagers who might be taking their first steps into the harrowing universe of American politics? It's okay to say you want to kick the president's ass? New Jersey Governor and Presidential Candidate Chris Christie said so. Ted Cruz, with his coloring books and his Dr. Seuss recitations, said so, too. So it must be okay, right?

This is where we are, folks. And it'll be nearly impossible to turn back.