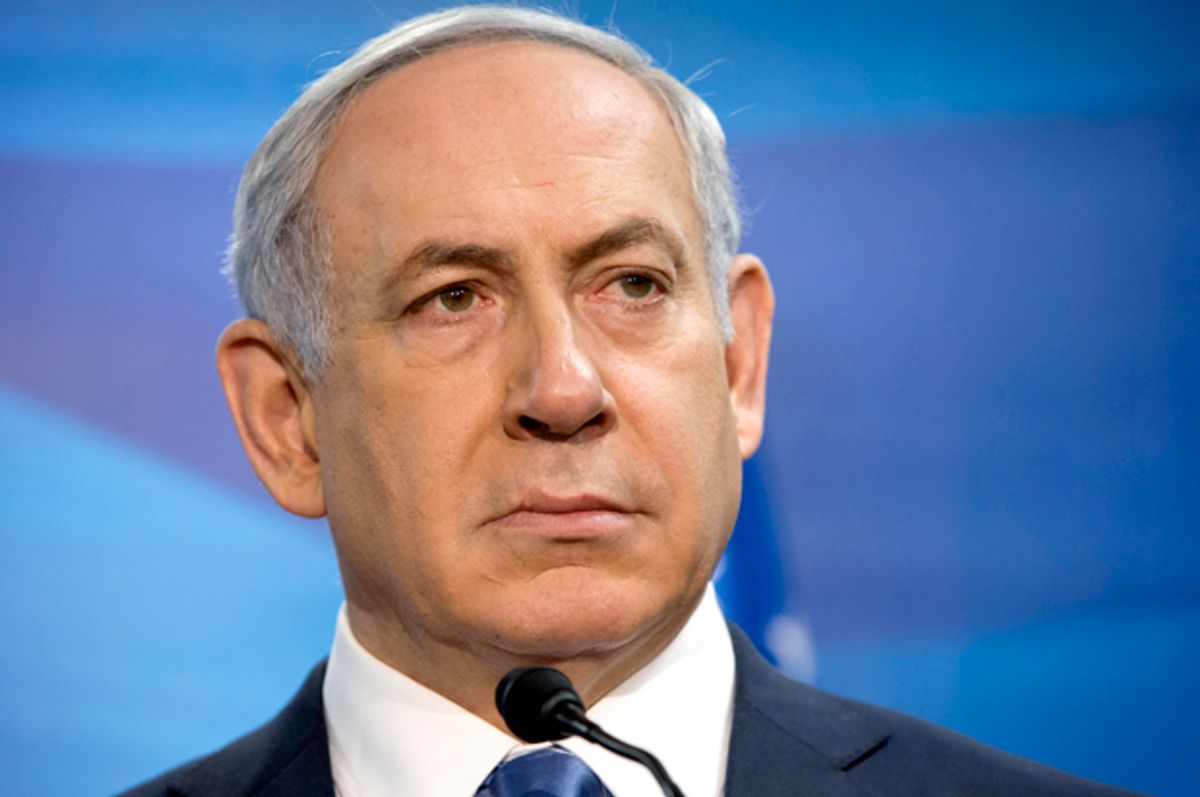 Most moral and ethical people would recoil from the idea of profiting from someone else’s pain and suffering. How much more objectionable is it, then, when one is profiting from ongoing, systemic violations of human rights?

In its new 162-page report, “Occupation Inc.": How Settlement Businesses Contribute to Israel’s Violations of Palestinian Rights,” the human rights group Human Rights Watch documents how settlement businesses facilitate the growth and operations of settlements.  HRW explains, “These businesses depend on and contribute to the Israeli authorities’ unlawful confiscation of Palestinian land and other resources. They also benefit from these violations, as well as Israel’s discriminatory policies that provide privileges to settlements at the expense of Palestinians, such as access to land and water, government subsidies, and permits for developing land.” The report “calls for businesses to stop operating in, financing, servicing or trading with Israeli settlements in order to comply with their human rights responsibilities. Those activities contribute to and benefit from an inherently unlawful and abusive system that violates the rights of Palestinians.”

What is critical to bear in mind is that these activities amount to theft as well—the benefits of Palestinian land, resources and labor are being reaped by these companies, not by the Palestinians themselves. This is wage theft on a massive, collective scale, and the Palestinians are clearly not in the position to bear any more losses of critical resources. They are a population situated at the heart of despair. Their slow death is, of course, something the Israeli state has no problem in accommodating, if not facilitating. Its horrific 2008 thought experiment, pondering how many calories are necessary to maintain a Palestinian life at bare minimum, is one example of this mind-set. Human rights groups vociferously protested the plan and it was never carried out. What we see in the settlements now with regard to these companies is both an economic mode of starvation, and, worse, a greedy profiting from that suffering.

Most important, HRW notes that “the report comes at a time when economic pressure on Israel to end its settlement activity is gaining momentum. It has the potential to exert effective pressure on businesses to cease their settlement-related activities, because it makes a law-based, rights-based argument likely to resonate with corporations and their stakeholders: companies simply cannot continue to do business in or with settlements without violating their human rights responsibilities.”

Indeed, the recent decision of the Westpath Investment Group to take on the beliefs and commitments of the United Methodist Church with regard to investments reveals a growing consensus to invest only in companies that observe human rights law and specific social principles:

The General Board’s Human Rights guideline reflects The United Methodist Church’s call for all general boards and agencies to “…make a conscious effort to invest in institutions, companies, corporations, or funds whose practices are consistent with the goals outlined in the Social Principles.”

I called on Sarah Saadoun, an Israel/Palestine researcher at Human Rights Watch, and asked her to explain the importance of this report. Why is this something to pay attention to in this particular historical moment?

Can you say something for the average American reader--why is this report important to those in the U.S.?

American businesses are directly involved in Israeli settlement activities. The report highlights the case of RE/MAX, a Colorado-based global real estate franchise that has a branch in the settlement of Ma’aleh Adumim. Its branches inside Israel also rent and sell properties in settlements. In doing so, RE/MAX is not only helping to facilitate unlawful settlements, it’s profiting from homes built on land that Israel confiscated in violation of international humanitarian law. Even though the benefit of this land rightfully belongs to Palestinian residents of the West Bank, they cannot enter settlements without an Israeli-issued permit, let alone rent or buy property there. American businesses also purchase and sell goods produced in settlements, in breach of their human rights responsibilities, which applies throughout a company’s supply chain.

The report also highlights states’ international law duty not to treat settlement goods imported into their territory as though they are Israeli-made. U.S. customs regulations dating from 1995 require products made in the West Bank and Gaza to be labeled as such, and prohibits them from being labeled "Made in Israel.” Yet these regulations are not being enforced to require the accurate labeling of settlement products.

What broader issues are involved?  How is this part of something larger and extremely deadly?

The report highlights two sides of an abusive coin. On the one hand, settlement businesses benefit Israeli policies that encourage the growth of settlements and the settlement economy by providing financial incentives and granting them access to building permits and licenses to extract natural resources. On the other, it imposes severe restrictions on Area C of the West Bank, which contains most of the open land and natural resources crucial to economic development. For example, between 2000 and 2012, Israel’s Civil Administration rejected 94 percent of Palestinian building requests in Area C; in 2014, it granted one single such permit. According to the Palestine Union of Stone and Marble, Israel has not issued a single license to a Palestinian to open a new quarry since 1994. The World Bank estimated in 2013 that the cost of Israeli restrictions in Area C to the Palestinian economy is $3.4 billion annually.

This is an inversion of what is required under the laws of occupation, which requires that the resources in occupied territory be used solely for the benefit of the native population or for military necessity. Instead, Israel allocates the vast majority of the resources under its control in Area C to Israeli settlers, who should not be there in the first place, and severely restricts Palestinian access to them.

Why now?  How do you see the present moment?

Human Rights Watch has been investigating, writing about and advocating against violations of international humanitarian law and human rights abuses associated with settlements for years. In 2010, HRW released a report, Separate and Unequal, which described the two-tiered system of laws, policies, and practices in the West Bank that privileges settlers and harshly discriminates against Palestinians. This report builds on those findings to describe the ways in which businesses contribute to and benefit from this unlawful and abusive system in contravention of their human rights responsibilities.

The report also comes at a time when recognition of the problems associated with doing businesses in or with settlements is gaining momentum. It has the potential to exert effective pressure on businesses to cease their settlement-related activities, because it makes a law-based, rights-based argument likely to resonate with corporations and their stakeholders: Companies simply cannot continue to do business in or with settlements without violating their human rights responsibilities. Indeed, in the process of writing the report, one of the companies we researched relocated, and just this week, the French telecom giant Orange ended its relationship with the Israeli company Partner after being criticized for supporting settlement infrastructure. A few days ago, a major American pension fund announced it would divest from the five major Israeli banks, because of their activities in the settlements.

What kinds of misperceptions or misrepresentations would you like to call attention to?

Human Rights Watch is not calling for a consumer boycott of settlement companies and it does not have a position on the boycott, divestment, and sanctions movement — or boycott movements more generally. We are rather calling on businesses to comply with their own human rights responsibilities by ceasing settlement-related activities.

What else is important to emphasize?  What kinds of myths need to be addressed?

The most common defense of settlement businesses is that they benefit Palestinians by providing them with jobs. The report aims to describe the broader context within which settlement businesses operate, and the ways in which businesses contribute to and benefit from Israeli policies that leave Palestinians with no better alternative. The report also describes the legal gray zone in which Palestinians employed in settlements work, leaving them vulnerable to abusive conditions. For companies who are operating under privileged circumstances that Palestinians could never even hope for — and indeed cause grave harm to Palestinians and their economy — to justify their presence in unlawful settlements because they employ Palestinians is to add insult to injury. If these employers truly cared about the financial wellbeing of Palestinians, they should be lobbying their own government to lift its discriminatory restrictions and end its settlement policies.

Omar Barghouti, co-founder of the Boycott, Divestment, and Sanctions movement, asserts that:

Though HRW does not endorse BDS or call for a boycott against Israel or companies profiting from its violations of international law, it actually calls for something quite radical: sanctions against Israel.

Cutting aid to Israel by billions of dollars (the amount it spends on the occupation enterprise, including settlements) would be the most radical sanction yet if implemented.

When asked, “Why should we in the US care especially about the Israeli Occupation?” the first thing most Americans usually think of is the huge amount of U.S. taxpayer money that is given over to Israel—more than $3 billion a year; over $100 billion since 1962—to facilitate this enormous, brutal and illegal occupation. We also think about how the U.S. offers Israel what amounts to diplomatic immunity in the form of persistent vetoes of U.N. resolutions critical of Israel. In a letter to well-known Israeli-American businessman and donor to the Clintons Haim Saban, presidential candidate Hillary Clinton proudly reminded him that she has opposed "dozens of anti-Israel resolutions at the UN, the Human Rights Council, and other organizations,” thereby continuing a long tradition of U.S. protection of Israel against international criticism and censure. Americans should protest against both these ways we have become complicit, against our will, in Israel’s Occupation. Yet withholding tax dollars and changing political leadership is not easy. What is less difficult, and more immediately within our capacities, is to initiate and to support efforts to end these practices. In this hard-hitting report, Human Rights Watch unambiguously critiques the harm and illegality of the Occupation, telling companies to pull out of doing any business whatsoever in the settlements.