This is right-wing America: Palin, Trump speak directly to the politics of hate and resentment that drives conservatism

The right wing's politics of resentment is nothing new, even if conservatives are being more honest about it 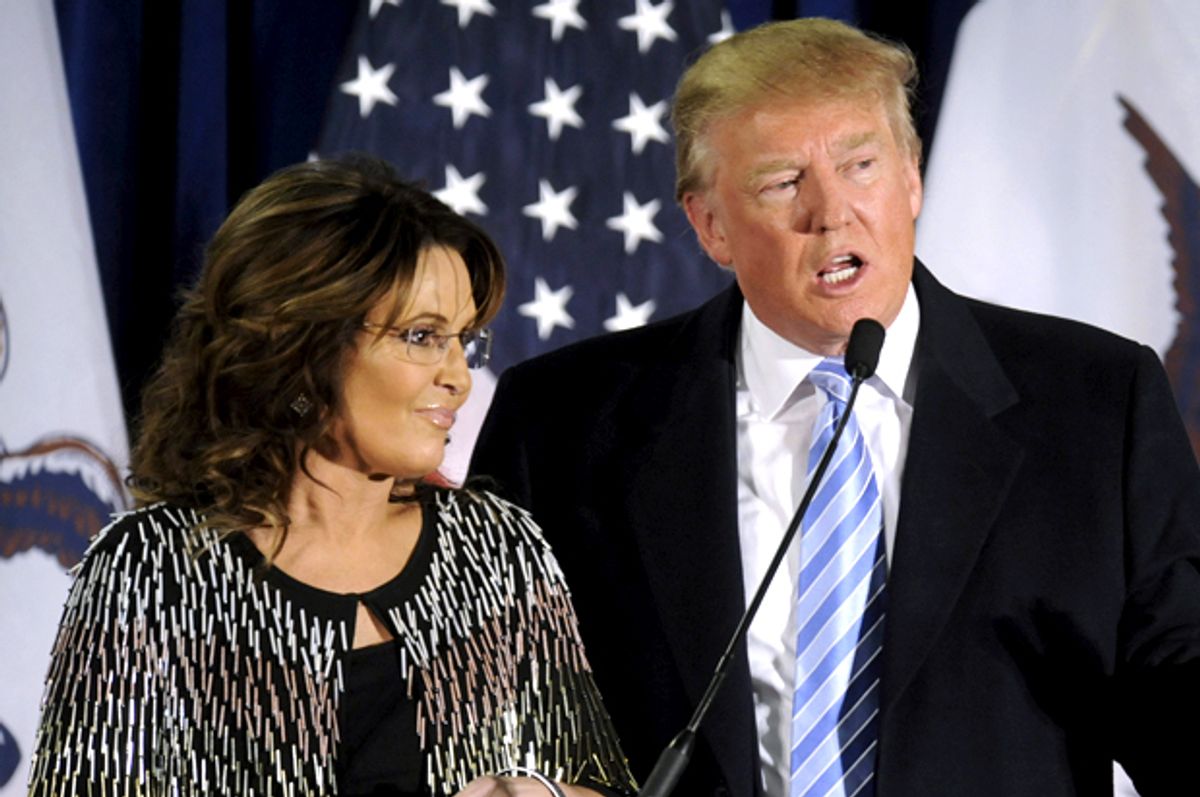 Sarah Palin's endorsement of Donald Trump on Tuesday was a mighty thing to behold. Palin is almost delightfully unencumbered by old-fashioned notions about rhetoric, such as the long-standing belief that ideas should flow together into a larger argument. She's more like a magic 8-ball of wingnuttery, spewing out random right-wing truisms at random. *Shake* "The media is out to get you!" *Shake* "Imply that the only real Americans are conservative white people." *Shake* "Hilariously inauthentic countryisms about strength and determination!"

All Republicans have drifted in this direction of abandoning traditional speech-making in favor of randomly tossing out right-wing slogans, but Palin is the absolute master of the form. But her purpose here — and the same can be said of Donald Trump — is not to make logical or even comprehensible policy arguments. It's to stoke a sense of grievance in white people by pushing their buttons. Even trying to mimic the form of an argument-based, content-driven speech would undermine the larger mission. The idea here is to clear the head of all logic and rationality, and fill it with pure rage and entitlement. Ideally, you get conservative voters down to the level of toddlers shaking their rattles and screaming at the top of their lungs because Mommy won't give you all the candy right now.

And it seems the strategy is working, and not just because Trump continues to ride high in the polls. On last Friday's "The Kelly File" on Fox News, polling guru Frank Luntz conducted an on-air focus group of likely Republican voters in South Carolina, and what quickly became apparent was that these folks were primarily, almost exclusively motivated by what Crooks and Liars calls "white racial grievance." So much so that a dyed-in-the-wool loyal Republican like Luntz ended up seeming a bit thrown by how ugly the tone in the room was.

“What bothers me the most in this country is that you can’t even speak the truth any more or else you’ll be called a racist or a bigot or any other thing," one man huffed, while the rest of the group, which appears entirely white, amen-ed him and applauded.

"I have a right to my opinion without being labeled something. I mean, it’s ridiculous," a woman jumped in to concur. Someone in the group chimed in, calling it "reverse discrimination."

The outrage at the fact that other people have a right to an opinion about your opinion continued. "Anyone who says anything has to watch everything they say and you can’t label a spade a spade. Everyone is afraid to talk," another woman whined, literally using the most unfortunate expression you could possibly muster when the complaint on the table is that you can't say racist stuff without people calling you racist.

It's always funny watching legal adults, especially those who would be the first to demand "personal responsibility" and "good manners" in others, throw a childish temper tantrum because they can't act like pigs in public without other people judging them for it. But what is truly amazing about this is the off-the-charts levels of entitlement required to claim that your freedom of speech requires limiting other people's freedom to criticize.

In a way, this all makes sense. The modern conservative movement, for instance, isn't actually about ideological support for "small government," so much as it's about reserving government largess for white conservatives, while sticking the rest of us with the bill while we get nothing in return for it. It makes sense that the same kinds of people that want the government to give free land to rich ranchers while begrudging poor children food stamps might have a similar double standard when it comes to basic rights, like the right to free speech.

Because, that is what these South Carolina voters are clearly claiming: That their right to free speech depends on stripping free speech rights from others. If Trump wants to sew up the Republican nomination, he should propose a law banning liberals — or anyone, really — from offering any kind of negative reaction when a conservative says something nasty or bigoted.

David Frum, writing for the Atlantic, touches on why Palin and now Trump are really hitting the sweet spot for so many culturally conservative white people, though he's squeamish about explicating the racial implications in play. "What defined her was an identity as a 'real American'," he writes, "and her conviction that she was slighted and insulted and persecuted because of this identity."

He goes on, however, to confuse cause and effect when it comes to racialized grievances and conservative ideology:

Talk radio uses those feelings, too, of course, and has used them for years. But the more ideological stars of conservative talk—the Limbaughs, the Levins—try to use those feelings in service of a more-or-less coherent set of political ideas. Speaking to the feelings of persecution is only a means; some vision of a revitalized free-enterprise system is the end. For Palin, though, her personal grievances were always what the whole commotion was all about. She was effective, to the extent she was, because millions of people agreed that her personal grievances sometimes also represented theirs.

In reality, however, it's the other way around: Concepts of "free enterprise" and "small government" were developed to justify maintaining unjust race and class hierarchies. White entitlement precedes these conservative ideals. There's a reason that white people in the South suddenly discovered their fondness for "small government" Republicanism at the exact same time that massive civil rights legislation was passed.

Under the circumstances, this turn towards more overt grievance is admirably honest. "Small government" and "free enterprise" were never legitimate concerns that most people cared about. They're smoke screens established to justify union-busting and dismantling any federal programs that might help women, people of color, and gay people achieve equality.

"What it really boils down for me is, the cultural change," another woman in Luntz's focus group complained. That's what has been driving the conservative movement for decades: Fear of desegregation, fear of feminism, fear of LGBT acceptance, fear of an empowered labor force. Republicans have been able to mold these fears into seemingly less repugnant ideologies like "small government" for a long time, but the system is collapsing as of late. That's why politicians like Trump and Palin, who don't even try to graft a coherent-sounding ideology over the politics of resentment, are doing so well. But just because the conservative movement is being more honest about who they are these days doesn't mean that this isn't who they've always been.