It's free and everyone knows how to do it: The craze that's sweeping the nation -- we hope

A movement has emerged to get American's walking again. It seems to be working 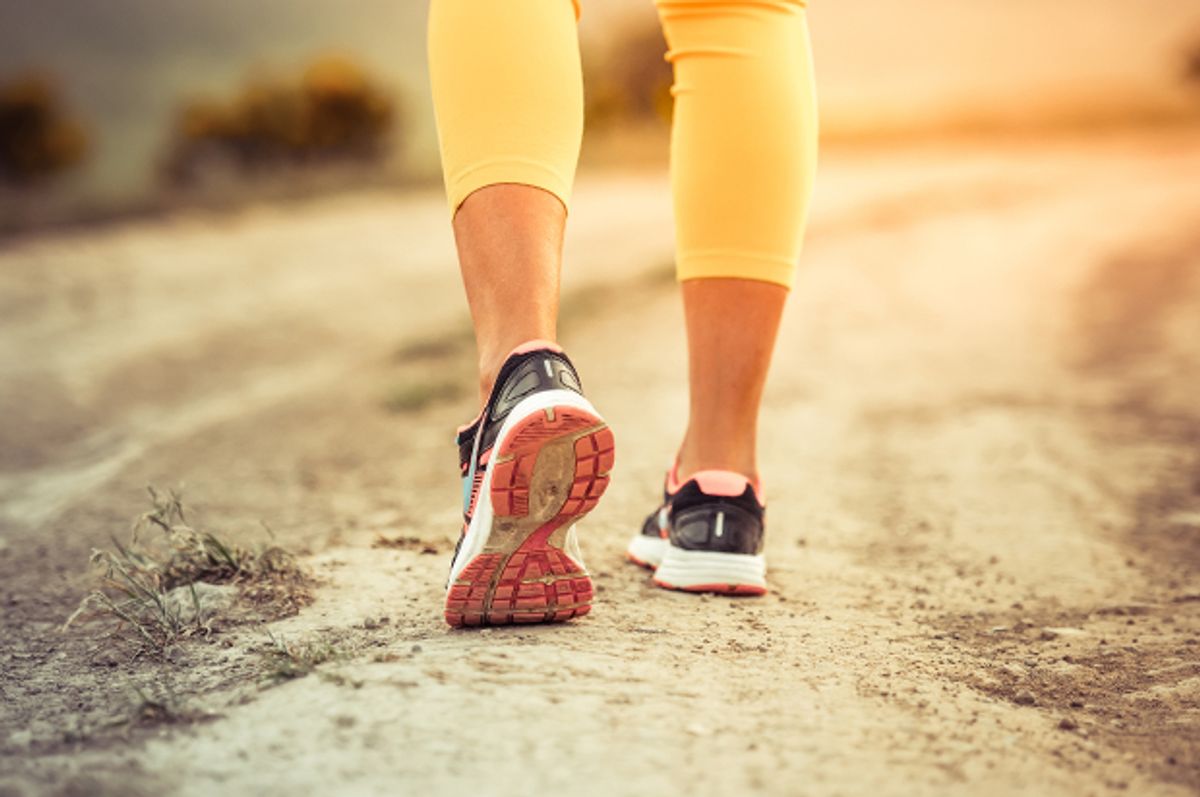 Everyone knows walking is good for you. It’s plain common sense, backed by a wealth of recent medical research. In fact, a major new study found that lack of physical activity is twice as deadly for us as obesity.

Health data shows that as little as 30 minutes of walking a day cuts the incidence of Alzheimer’s disease in half, lowers the likelihood of diabetes by 60 percent, limits colon cancer by 31 percent for women and reduces risk of dementia, heart disease, depression, osteoporosis, glaucoma and catching a cold.

This kind of evidence prompted U.S. Surgeon General Vivek Murthy to issue a call for Americans to walk more. “Physical activity – such as brisk walking – can significantly reduce the risk of heart disease and diabetes,” Murthy explains. “Even a small first effort can make a big difference in improving the personal health of an individual and the public health of the nation.”

“Walking is the most common form of physical activity across incomes and ages and education levels,” adds Thomas Schmid of the federal Centers for Disease Control and Prevention. That’s because it’s free, easy, relaxing, available right out your front door and easily incorporated into daily schedules.  Plus it’s fun. The CDC’s most recent research shows the number of Americans who take a walk at least once a week rose six percent in the last decade.

Still less than half of all adults meet the minimum recommended guidelines for walking, rolling in a wheelchair or other physical activity  (30 minutes a day five days a week), according to the CDC.  Even worse, only a quarter of high school students today reach the mark (an hour a day seven days a week), according to the Surgeon General’s report.

What can be done to ensure the health of our country? The Surgeon General encourages everyone to walk and work to make their hometowns more safe and inviting for people on foot.  He lauds the new walking movement that’s emerged over the past few years for getting Americans moving again.

Health care professionals are on the frontlines of this effort, and many are bringing the message back to their clinics by including physical activity as one of the vital signs—like blood pressure and tobacco use—they check on with patients. Some MDs even write prescriptions for walking. Several health care systems track physical activity in their health care records, including Greenville Health in South Carolina, Intermountain Healthcare in Utah and Idaho, and Kaiser Permanente, an integrated health care delivery system, in California and seven other states.

If Walking Were a New Drug, It Would Make Headlines

“What if there was a pill you took one day that lowered your blood pressure, prevented diabetes, improved your mood and protected against depression, increased bone density and prevented fractures, helped you remain independent as an older adult, enhanced your ability to think, and gave you more energy?” Robert Sallis and Karen J. Coleman ask in Sports Medicine Bulletin.

“Would you be asking your doctor to prescribe it for you?”

Such a drug already exists, Sallis notes, it’s called walking. “If walking was a pill or surgical procedure, it would be on '60 Minutes.'”

Sallis, a family practitioner at a Kaiser Permanente clinic in Fontana, California, keeps special walking RX prescription pads in his exam rooms, which he fills out for some patients saying, “This is what I want you to do to treat your high blood pressure or depression or diabetes etc.  If it’s not enough, then we will consider using a medication.”

What are patients’ reactions? “They respond very well to this message,” Sallis says. “This approach really frames for them how important exercise is to their health and treating their disease.”

Sallis first spoke up about walking and other physical activity being recognized as a vital sign in 2007, when serving as president of the American College of Sports Medicine and helping launch the Exercise is Medicine initiative with the American Medical Association.  The aim of that project is to highlight the mounting research proving that physical activity should be seen as essential to health and the treatment of disease.  It’s obvious that doctors, nurses and other clinicians should raise the idea of walking during medical exams, when people are paying particularly close attention to their health and how to maintain it.

Putting the Plan Into Action

In 2009, physical activity was designated as a vital sign for Kaiser Permanente facilities in Southern California and the idea was quickly adopted throughout the rest of the non-profit organization, the nation’s largest integrated care health system with 10.2 million members, 17,000 physicians, 50,000 nurses, 620 clinics and 38 medical centers on the West Coast, the Mid-Atlantic region, Colorado, Hawaii, and Georgia.

Patients are asked how many days a week on average they engage in moderate or strenuous physical exercise, like a brisk walk, and for how many minutes? These two simple questions frequently spark conversation about the value of walking (or yoga, Zumba classes, bicycling, gardening and other physical activity) in treating and preventing disease.

A follow-up study published in the journal Medicine and Science in Sports and Exercise found that 18 months after Kaiser Permanente adopted physical activity as a vital sign in Southern California, 86 percent of all adult patients had a record of their activity levels included in electronic medical records. In 2013, Kaiser Permanente’s Exercise as a Vital Sign program was honored with an Innovation Award by the National Business Coalition on Health.

“Asking an individual about their daily physical activity helps our providers learn what matters to our patients and prompts our patients to think about healthier habits,” explains Lisa Schilling, vice president for Healthcare Performance Improvement with Kaiser Permanente's Care Management Institute.  “It also allows us to connect the individual to resources and habits that promote better health.”

Even health care professionals sometimes need encouragement to live more healthy. Zendi Solano, a research assistant for Kaiser Permanente in Pasadena, California, admits that she knew the importance of exercise but “really didn’t take it seriously” until her doctor asked about it during a checkup. Diabetes runs in Solano’s family, and she was obese with elevated blood sugar. Right then and there, she decided to take up running. At her next physical, Solano had lost 30 pounds and her blood sugar levels were normal. Being asked about exercise as a vital sign, she says, “is a great reminder.”

About two-thirds of Sallis’ patients fall below the minimum federal guidelines for exercise, and half of those report no moderate physical activity at all during an average week, he says. "Talking about physical activity can have an impact on everyone," he says, especially high risk patients with diabetes, lung disease, heart disease, hypertension, arthritis or other chronic diseases.

“Anyone who is at risk for chronic disease should consider exercise an essential vaccine to greatly lower risk of illness and…extend life,” he wrote in a guest editorial for the British Journal of Sports Medicine.

The power of exercise to heal really hit home for Sallis after meeting Valerie, a 68-year-old patient with Parkinson’s disease who hobbled into his office with a walker. She was desperate and depressed because her medication was no longer working. He recommended she visit a fitness professional to walk on a treadmill at one mile-per-hour speed along with some resistance training and stretches.

“In a month and a half, she came back to my office without the walker and telling me she had more energy and a more positive outlook,” he remembers. This convinced him, “if something so simple and inexpensive as exercise can have such a profound effect, shouldn’t we try to prescribe this powerful medicine to all of our patients?”

For Liz Joy, medical director for community health at Intermountain Healthcare based in Utah, the “aha” moment about physical activity as a vital sign came in 2008 at a meeting focused on preventing obesity among youth. “It was a roomful of physicians, health care directors, scientists and coaches,” she remembers, “and one speaker got up and asked: ‘What is health care doing about this crisis?’  That’s when it came to me that physical activity needs to become a vital sign.”

Intermountain adopted the idea in 2013 in its electronic health record for use by clinicians in Utah and Idaho. “It’s a way to bring discussion of physical activity into the exam room,” Joy explains.  “Even if it’s just a brief conversation about how important it is to your overall health. I can let patients know it’s as important as blood pressure, and more important than obesity and cholesterol to your overall health.”

“I generally start by talking about walking, because it’s free and everyone knows how to walk,” she adds. “I’ll tell them just start with 10 minutes at a time, and no one has ever said they can’t do that.  Do that three times a day, and you have your 30 minute daily minimum.”

Joy notes that doctors have been charting people’s weight for generations, telling them to lose weight while watching the national obesity rate continue to rise. “Talking about physical activity is a positive conversation—something people can do to improve their health. And when they take that first step, sometimes their eating habits begin to change too. You’ve helped enhance their self-efficacy.”

Some of her patients don’t consider walking real exercise, so the conversation can offer new motivation to get back on their feet.  “I saw a patient and was surprised his records showed that his physical activity was zero. I knew he had a dog, and I asked if walked the dog? Yes, he said 30-60 minutes a day. But he didn’t think of it as exercise.”

“The physical activity vital sign is a great prompt to have a conversation with patients about activity and exercise—to let them things like gardening and dog walking count,” she adds.

Joy points out that health care systems have a strong incentive for adding physical activity to their lists of vital signs. “Physical activity is stressed in Medicare reimbursements as one of the HEDIS (Healthcare Effectiveness Data and Information Set) measures, which Medicare and others use to assess the quality of health care delivery to determine level of payments. It’s a huge financial driver.”

The American College of Sports Medicine has joined with other groups in the walking movement to alert health care professionals about the promise of adding physical activity to their list of vital signs.

“One strategy is to get influential medical organizations to formally adopt physical activity as a vital sign, and then activate their individual members,” says ACSM CEO Jim Whitehead. They’re already working toward that goal with 10 medical societies, including the American Medical Association, the American Hospital Association, American Academy of Pediatrics, American College of Cardiology and the Preventive Cardiovascular Nurses Association.

“This is for all health care providers, not just physicians.  Nurses can often make a greater impact because they typically spend more time with you, ” notes Brenda Chamness, ACSM Strategic Health Program’s senior director.

Working with Kaiser Permanente and the Every Body Walk! Collaborative, a coalition of organizations ranging from the CDC to AARP to NAACP to the PTA, ACSM hosted a two-day scientific roundtable on the subject last April, which detailed recent research and presented best practices used by working physicians, including Robert Sallis and Liz Joy. In October, several hundred health professionals around the country took part in a webinar on Making Physical Activity a Vital Sign.

“All this can have a major impact by showing people that they all don’t have to go to the gym to be healthy,” says Adrian Hutber, vice president of Exercise Is Medicine at ACSM. “They can just go out and take a walk.”

Jay Walljasper, author of "The Great Neighborhood Book," writes, speaks and consults on how to create better communities. Contact him at jay@jaywalljasper.com.