I've had enough of public grief: What are we really grieving when an artist dies?

At times like these, I have the feeling I must be missing a compassion gene that the rest of my generation shares 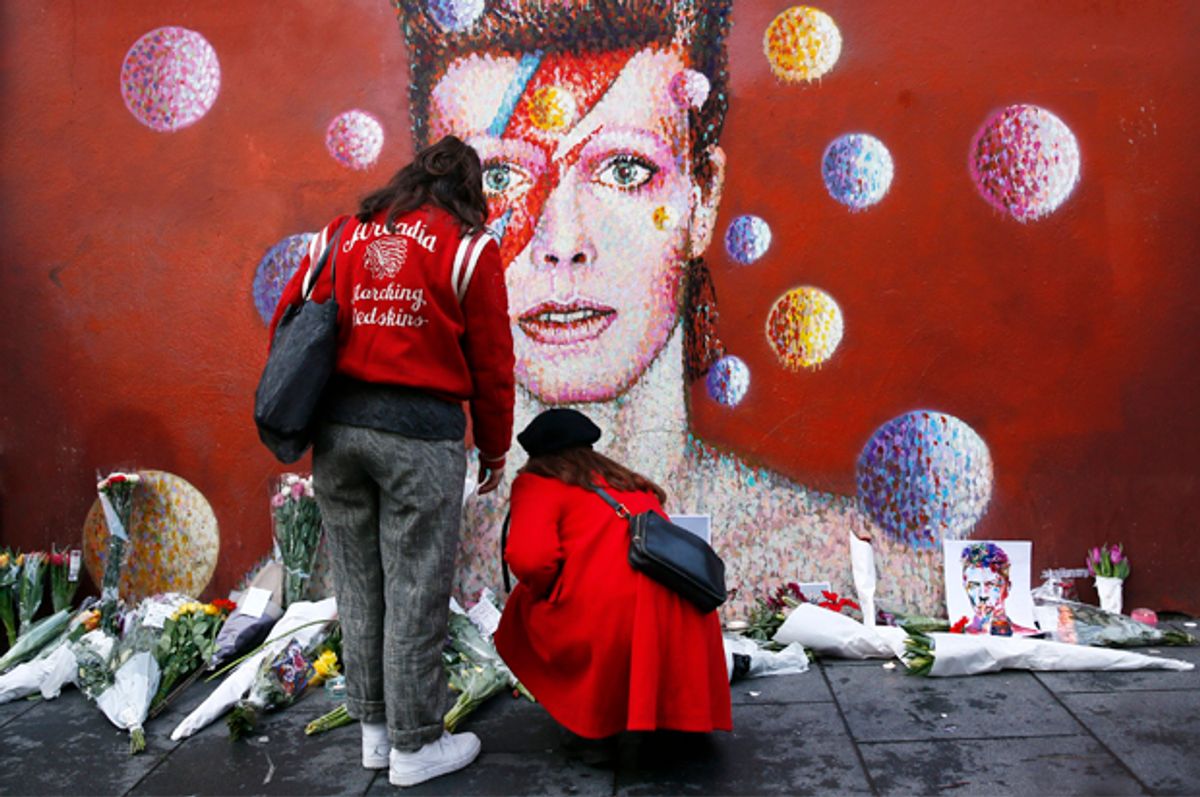 When the news about Glenn Frey’s death hit, my first thought was, “Here we go again,” followed by, “Oh, he did ‘The Heat Is On?’” From there my Facebook feed became a celebration of the most beloved Frey-Eagles songs, from grainy live performances to "Seinfeld’s" quirky “Desperado” bit. The tributes came and went and then the world carried on.

It was a refreshing close to a series of celebrity deaths, in which every passing seemed to gain new life as fans appropriated each tragedy to make it their own: posting song lyrics and concert footage, dusting off memories of personal encounters, and sharing anecdotes about how this actor or that musician impacted their youth.

That level of navel gazing becomes amplified when it’s posted in droves on a public forum, and the recent onslaught of high-profile deaths made the phenomenon impossible to avoid: The year kicked off with an endless stream of Motörhead tributes and Lemmy memes, meaningful Alan Rickman quotes and Snape mashups, and the occasional candid photo of Natalie Cole.

And yet nothing could prepare me — or, really, anybody — for the emotional outpouring that followed David Bowie’s death. Threads quickly generated among fans commiserating in their numbness, tears flooding as they resurrected favorite songs and were launched back into their adolescent years. For me, it only elicited the disturbing feeling that I must be missing a compassion gene that the rest of my generation shares.

I get that he was an innovator, a chameleon, a quotable genius, an artist in the truest sense, that for Generation X, his influence came at a place and time when pop culture was a shared experience and his artistry became ingrained in our cultural DNA, setting the tone for a generation even if we didn’t realize it. Intellectually, at least, I get that when our heroes die, it sets off an avalanche of anxiety of our own mortality and fleeting youth.

But I’m hard-pressed to come up with any artist — musician, actor or otherwise — whose death would throw me into such an emotional tailspin. Anyone I spoke with simply pointed to Bowie’s impact on their most formative years, whether it was his gender-bending reinventions that offered hope to the young people who desperately wanted out of their own lives or his indefatigable creativity that redefined what art and music could be, right up until his last days. And yet, it was baffling to me how many people could so deeply mourn a man they didn’t know and felt such a need to share that grief on a virtual platform.

“The reactions have to do with the individual and not the person who died,” says Corrie Sirota, a Montreal-based grief loss and bereavement specialist. “Grief is a process, not an event, and it’s cyclical rather than linear — meaning you can go 20 years and fully accept a death, but still feel anger. So any reaction to a celebrity death depends on your personal interpretation.”

Only a few recent events can come close to the Bowie phenomenon. In the cases of Philip Seymour Hoffman and Robin Williams, their tragic, too-soon deaths seemed to inspire a similar level of online dialogue. Not just personal connections and lamentations of great art that would never be realized, but about substance abuse, mental health and suicide — conversations that resonated far beyond any one individual’s experiences.

Going back further, we can look at the untimely deaths of Michael Jackson and Princess Diana and the hysterical displays that accompanied the public grieving process. But Jackson’s mythology is forever conflated with controversy and Princess Diana — while an icon in her own right — could hardly be confused with an artist with a body of work. Can the reactions to their stories compare with the outpouring of emotion that celebrates Bowie’s life, art and legacy?

Today, West draws the inevitable comparisons between Princess Diana and Bowie: “Several factors are at work here: the cult of celebrity, a more emotionalized society and, indeed, a more fragmented and lonely society that uses public grief, however dubiously, to bond with strangers through collective tear shedding."

Only, with the latter, social media has amplified the mourning experience to unprecedented extremes.

"Social media has generally helped to erase the distinction between what is public and what is private, and between political and personal issues,” says West. "There certainly was a shock value with Bowie as there was with Diana, which explains the overreaction, and social media has made instant reaction readily available.”

The difference between then and now is that when we learned of Princess Diana’s death, we shared our initial disbelief and subsequent sadness with those physically around us, and then the moment passed naturally. In 1997, news media coverage was easy to shut off. Those who wanted to mourn publicly literally had to take to the streets — as evidenced by the mounds of flowers trailing the funeral procession and piled several feet deep before Kensington Palace and Buckingham Palace (overlooking the fact that she was no longer a welcome member of the Royal Family).

In his documentary “Diana: The Mourning After,” Christopher Hitchens takes a cynical look at those who spun the tragedy into their own personal grieving process.

“How can you grieve someone you don't know? It’s presumptuous and, I think, offensive,” intones a voice-over before Hitchens delves into the various types of public mourning, including: those who worshiped and idolized her; those who felt they’d been given permission to grieve an event in their own lives; and those who happened to be there and became part of a shared experience.

Today, social media satisfies much of that need for a shared experience and to become part of the public conversation. With Facebook attracting 73 percent of adults ages 30 to 49 and 63 percent of adults ages 50 to 64, it’s no wonder that the platform became Ground Zero for Bowie-related musings, which echoed across the Internet, its reverberations still lingering days after the main event.

Is turning to our Internet community the modern way of ritualizing the grieving process? “How society reacts to an event will have an impact on how you react, and that feedback that will either help or hinder your process,” says Sirota, from a psychotherapist’s perspective. “The circumstances around the death, how your family deals with death, your relationship with the deceased, and your support system are all part of the experience as well.”

And so, perhaps in the case of processing the death of a celebrity who is also a stranger, it’s become as simple as swapping “society” with “Facebook” and “relationship” with “perceived connection,” and “social support” with “likes” and “comments.” Do our heroes deserve better than having their legacies co-opted into our own ego-driven platforms? Or perhaps they would applaud the fact that art and culture now have new opportunities to live on forever.

Sarika Chawla is a Los Angeles-based writer and editor. By day, she creates multimedia marketing content for the tourism industry; by early mornings, nights and weekends, she writes about culture, food, parenting, and other things that seem interesting at the time.