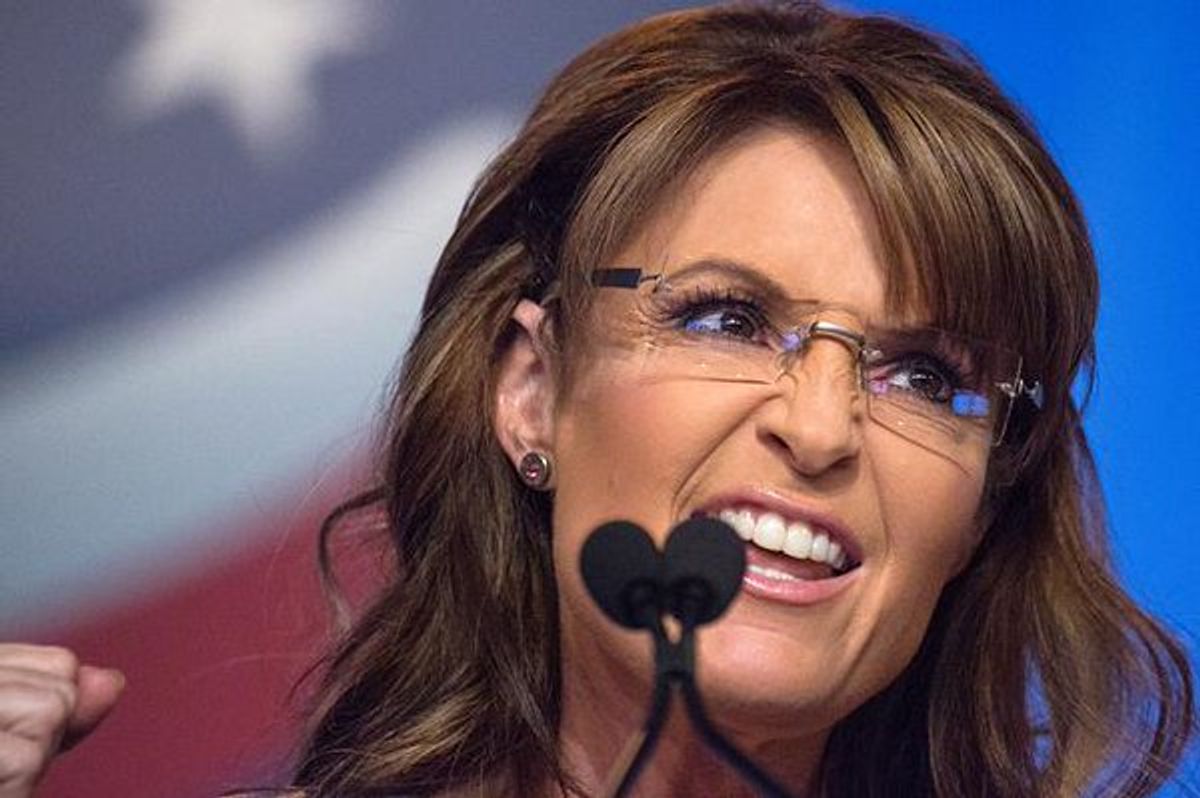 Sarah Palin knows what she's doing. I know this is not a popular opinion on the left in the wake of her lengthy roller coaster of a speech that she gave to endorse Donald Trump on Tuesday in Ames, Iowa, but Palin's speech was actually a bit of political genius. And not just because she got the hated media to spend two days making fun of it, reinforcing her bitter, gun-clinging audience's victim complex. (Not that this should stop you from making fun of them. It's not like condescendingly pretending to respect them wins any favors, either.)

No, Palin is the vanguard of a new way of right-wing speechifying, a surprisingly avant-garde method of political outreach for people who think of themselves as the protectors of tradition. Her methods are the most outrageous, but as with most artistic revolutionaries (in this case, with the art of making political speeches), what seems iconoclastic now will swiftly become the norm for those who follow. Her speech was, for Republican politicians, the "Rite of Spring" or the "Salon des Refusés." And we can already see the signs that other Republicans are walking the trail that Palin blazed.

Right now, the standard reaction, especially on the left, is to make fun of Palin, wondering if she's an imbecile or merely just drunk. (She could be! Many innovative artists are, though.) The New York Daily News called her "stupid" in a cover that received many accolades in liberal circles.

Sure, Palin isn't winning any intelligence contests or even junior leagues "Jeopardy!" any time soon, and yet, I don't think her speech can be dismissed so easily. The main objection to her speech is it doesn't fit into the traditional norms of political speech-making.

Traditionally, a political speech is an argument. It has a thesis, which is backed up with examples and organized in a coherent structure so that it has, or at least feels like it has, a logical flow to it. Reagan's speech at the Brandenburg Gate argued that Western capitalism was the best protector of freedom, and was backed up by the example that was West Berlin. Obama's "Audacity of Hope" speech argued that liberal values of equality and diversity were our nation's strength, and he backed this up with many examples, including his own biography.

It is true that anyone trying to cram Palin's speech into these traditional forms will be lost forever. It's hard, at times, to even know what she was trying to say, as her speech careened around, touching on often unconnected seeming points. Even those trying to argue that her speech was substantive have to do so through heavy annotation and interpretation.

The thing is, Palin isn't trying to make an argument. That's not her strong suit, and that's not what audiences want from her. Her speech was more impressionistic than argumentative. She was there to push buttons and arouse passions, not get people thinking.

Palin understands, probably better than anyone besides Donald Trump, how thinking is the enemy of the conservative populist mission. What she wants is to make you feel, to have those feelings of bitterness and misplaced entitlement wash over the crowds until they are screaming for more blood. In this, she succeeded.

It's not a surprise, then, that some folks out there are comparing her speech to poetry, with its rhythms and internal rhymes. One blogger broke down notable parts of her speech into free form poetry.

Who are they to say that?

she is the Republican, conservative movement icon

and hero and a Trump supporter.

Tell her she’s not conservative.

How ‘bout the rest of us?

proud clingers of our guns,

our god, and our religions,

Tell us that we’re not red enough?

Yeah, coming from the establishment.

Or, if you prefer more modern forms, her words have already been matched with hip-hop beats:

"You farm families, and teachers, and teamsters, and cops, and cooks. You rockin’ rollers. And holy rollers!" may not be Walt Whitman singing of "mechanics, each one singing his as it should be blithe and strong" or the "wood-cutter’s song, the ploughboy’s on his way in the morning, or at noon intermission or at sundown," but you know, it's the same gist.

Palin understands what other Republicans are just beginning to get, which is that the conservative base is an audience that is post-argument. Conservatism of the 21st century is an ideology built on sand. Its arguments fall apart upon the briefest of examination and the supposed "evidence" for their beliefs are mostly lies and self-delusions. Sticking with the argument and evidence-based structure in the era of climate change denialism and creationism is a fool's game and Palin knows it. Better instead to focus strictly on emotions and tribal identity, eschewing not just argument but even structuring your speeches to resemble arguments. Imagistic speeches that arouse passions while silencing doubts is not stupid, but brilliant.

And while Palin is the vanguard of this movement, a careful observer will notice that other Republicans are quickly following on her heels. During the sixth Republican debate, for instance, there was a noticeable scramble away from trying to make actual policy claims and promises, especially with regards to foreign policy, and an embrace of this content-free imagistic language. Like Cruz's opening statements:

Today, many of us picked up our newspapers, and we were horrified to see the sight of 10 American sailors on their knees, with their hands on their heads.

In that State of the Union, President Obama didn’t so much as mention the 10 sailors that had been captured by Iran. President Obama’s preparing to send $100 billion or more to the Ayatollah Khamenei. And I’ll tell you, it was heartbreaking.

While it doesn't reach the heights of imagistic riffing that Palin reaches, this does come close a Palin-esque non-argument. Cruz riles people up, because riling people up is good, because they enjoy being riled up, and Obama fails at the task of riling you up (because he doesn't want to rile you up over a non-issue like this, of course). Issues like diplomatic relations or even effectiveness at getting the soldiers back —places where Republicans are weak — are ignored completely. All that matters is the image and the feeling that it provokes. You are invited to ignore all other questions.

To be clear, emotion is not always or even usually the enemy of logic. In the traditional political speech, audiences are encouraged to tie their emotions to argument. You are angry, here is the solution. You want hope, these policies will provide it.

But Palin, by eliding the argument-based structure of traditional speeches, is getting past this altogether. Anger is turned into hate is turned into more anger, until it spins off, completely unmoored from any considerations like "why" or "how." Her innovation helps Republicans get over the logic and evidence problems that plague them. And so we can expect her methods to become more, not less prevalent over time.