Setting Bill O'Reilly straight on his anti-socialism rant: It's not fear that motivates Americans to work 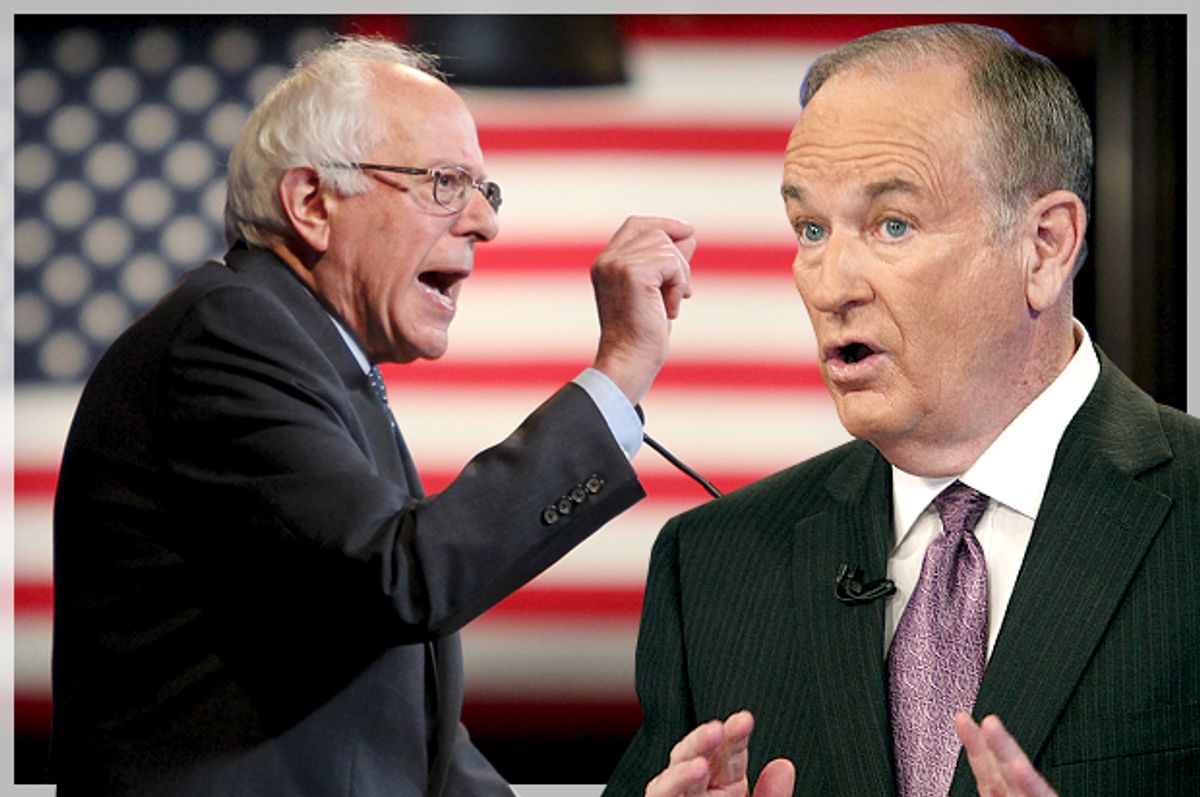 Whether Sen. Bernie Sanders wins or loses, one thing that can be said is that he's done what few, especially on the right, thought possible even just a year ago: He made the word "socialism" viable within the bounds of U.S. electoral politics. It's a change that has been a long time coming as polling shows creeping acceptance of the word, but Sanders's campaign put it to the test and largely succeeded. The idea that it's impossible to be taken seriously while proclaiming one's self a socialist has been discredited.

And conservatives are getting nervous. Simply accusing someone of being a socialist used to be enough to discredit them, but now it seems you might actually have to make, gasp, arguments explaining why it's a naughty.  (And to force this change so soon after the same thing happened with homosexuality — will you liberals never stop?!) So Bill O'Reilly dug into the stacks of right-wing propaganda, blew the dust off them and started reciting them for the Fox News audience.

And finally, "The Factor" tip of the day: the damage of embracing the socialism train. In life, anything worthwhile is difficult. If you want to achieve, you will suffer. Period. But the socialist philosophy ignores that truism. It is based on entitlement that we all have a right to live in a certain way. To get specific things given to us. That is a false narrative that damages human beings and weakens countries because it robs of incentive. It robs you of incentive to reach your full potential. "Factor" tip of the day.

There are many ways to go about responding to this. After all, the claim that socialism causes productivity to grind to a halt as the populace sits around waiting for a government check is an empirical claim, easily tested against reality.

Sanders has been clear that he is referring to socialism of the sort that is practiced by western European countries that have strong social safety nets. It's easy enough to test this claim. When you go to Paris or Amsterdam, are the streets piled with garbage? Do the trains fail to run? Do you go to a grocery store and find the shelves empty of food? No, and to claim otherwise is to be a liar. (Not that this has ever stopped conservative pundits.)

But what really gave me pause, hearing O'Reilly's lecture, was what a deep insult he is delivering to his audience. The argument here is that the human spirit only responds to the whip. Human beings, a groups that includes the O'Reilly audience, only work if under the dire threat of starvation if they don't, according to O'Reilly. Ambition, innovation, curiosity, even just the satisfaction of being useful and productive? O'Reilly appears to believe none of the higher emotions can work to move a person to labor. Fear and pain, or the avoidance of them, are the best we're going to get, he seems to believe.

What's interesting is he isn't even limiting his argument to those forms of labor that even the most devout communist must admit are probably not so fulfilling to the human spirit, such as cleaning up garbage. He addresses himself specifically to those who "want to achieve", language that implies he is discussing not just jobs, but people who are building careers. Does he really believe---or does his audience believe?---that only the gnawing fear of homelessness will compel people to become doctors or lawyers or tech innovators or journalists? Does O'Reilly himself show up to work every day because he fears that, if he quits now, he will never eat pizza again? Doubtful.

More to the point, wouldn't this belief that work is only extracted out of people through fear recommend many liberal policies that conservatives like to denounce, such as the estate tax? If we want the children of wealthy  people to bother learning a skill and putting themselves to work, you'd think conservatives would be the first to suggest throwing them out on the street without a penny, so they learn to survive. And yet, it is conservatives who worry themselves to death that the children of the wealthy might have to go a day without a thick layer of cash to sleep upon.

Obviously, the conservative brain is built such that when you hear a bold assertion that people cannot work unless being forced into it through fear, they quietly assume the speaker is talking about other people. In the past, these arguments used to be made more explicitly, with the human beings assumed to be inherently lazy usually marked by race or ethnicity. Now a generalized argument, coupled with an eyebrow wiggle, will get the job done. O'Reilly's audiences like to believe they are good people who work because they want to, but it's just everyone else who is too lazy to move.

It's not false, exactly, that fear and deprivation are motivators to work. Sadly, there's a whole lot of deeply horrible human history — which is continuing to this day — to prove this. But most of history also shows that people are motivated mainly by reward. Fear will get you to do the bare minimum of work. But hope is what gets people to build the pyramids, the airplane, and computers. Curiosity drives the arts and sciences. And the pleasure of accomplishment alone is what gets many people going during the day. The existence of hobbies (even video games), most of which involve some kind of labor, is demonstration of this. If you want people to work, make it worth their while.

And the fact of the matter is that Sanders-style socialism actually helps people reach their heights far more than the fear-based economy that O'Reilly prefers. Ask anyone who had to choose to spend their days grinding at a corporate job instead of working on innovative tech or art ideas they have because they lack for health insurance.

Of course, making work worth people's while is exactly what the right wants to avoid. After all, there is a lot of scut work that needs to be done, and the only way to make that worth people's effort is to compensate it fairly and to make the workplace as safe and pleasant as possible, so that showing up isn't a misery. This, more than anything, is what conservatives fear about socialism. It gives workers leverage to demand better conditions and fair compensation for their work. It isn't even just the labor costs, so much as the way that this sort of thing shrinks the gaps between the haves and the have-nots that offends. After all, when basic things like a warm home and a good meal are luxuries, then the rich feel even richer than they would if it were just yachts and diamonds.