"Boys for Pele" turns 20: Revisiting the year when Tori Amos truly came into her own

By 1996, Amos was already an icon—but this album moved her into a whole new level of power 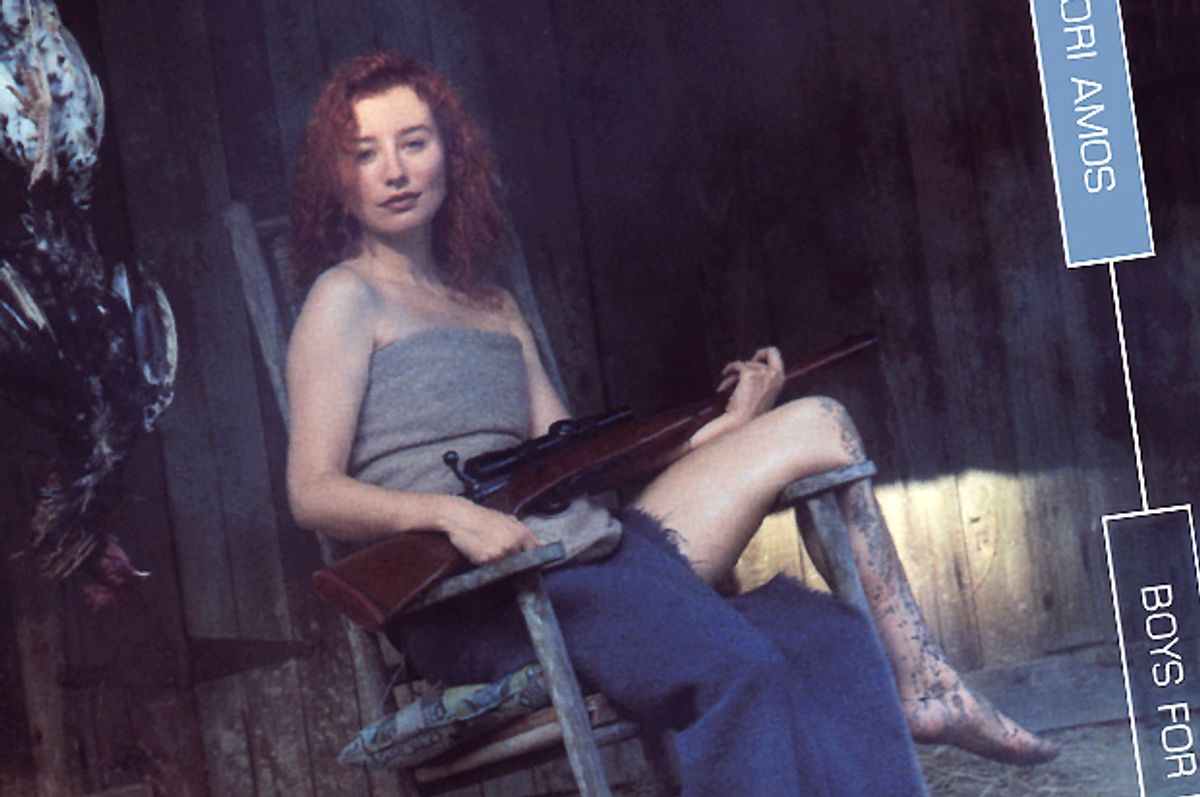 On Jan. 23, 1996, Tori Amos released "Boys for Pele" in the U.S. By this time, the fiery pianist was a radio and MTV staple, as well as a beacon of comfort and inspiration to anyone grappling with religion, sexuality and the patriarchy. However, the cover of "Boys for Pele" immediately signified that Amos was coming into her own even more dramatically: She's pictured sitting in an old rocking chair wearing ripped pants, and she's slung a dirt-covered bare left leg over the chair's arm. This position enables Amos to loosely hold a shotgun, while maintaining a look on her face that lands somewhere between defiance, amusement and tranquility. Taken as a whole, the cover comes across like a representation of escape from conventions, gender roles and oppression.

Not coincidentally, those same concepts permeate "Boys for Pele": Amos had recently made a creative and romantic break with Eric Rosse—who had co-produced both 1992's "Little Earthquakes" and 1994's "Under the Pink"—and she decided to take control over her music and career. First and foremost, she produced the album herself, recording it both at a church in Ireland and in New Orleans. "I'd never allowed myself to jump off the cliff by myself," she told the Chicago Tribune in 1996. "But with this one, it was like, 'You know, guys, thanks for the lessons, but give me my own Formula One car—let's race!' I was at the point I could not answer to anybody. I'd been answering my whole life to some patriarchal figure."

Thematically and musically, "Boys for Pele" is indeed concerned with self-empowerment—or, as she once told George magazine, "women claiming her own power." The album was not only Amos' longest full-length to date, but it boasted richer, more ornate instrumentation and flourishes than her previous records. Harpsichord features prominently on the vaguely psychedelic highlight "Talula," the classical-meets-grunge slink "Professional Widow" and the antique-sounding, hymn-like "Blood Roses." Electronic beats swing like chiming pendulums throughout "Caught a Light Sneeze," while there's a solemn gospel choir on "Way Down," and the legendary Black Dyke Band contributes velvety horns on the otherwise piano-only "Putting the Damage On." The Meters' George Porter Jr. adds funky bass burbles throughout—a vibrant, velocity-laden foundation that matches the album's sense of rebirth. And she even hit No. 1 on the Billboard Hot Dance Music/Club Play chart with a brisk, starry-eyed Armand Van Helden remix of "Professional Widow."

Still, the recording leaves room for imperfections: "Beauty Queen," the first track on "Boys for Pele," begins with a quiet creaking sound, which is Amos entering a makeshift box constructed in the studio to enhance recording. ("My engineer came up with the idea that instead of blanketing the instruments to improve the acoustics, we'd blanket Tori, put me in a box," she told the New York Times.) These subtle peccadillos enhance the idea that power dynamics are messy and sometimes volatile, a concept that crops up time and time again on the album. "Putting the Damage On" is a wrenching song about the flawed nature of a breakup—the residual feelings that linger despite the pain and separation—while "Little Amsterdam" is a harrowing chronicle of racism's divisive nature: "'Cause girl you've got to know these days/Which side you're on," Amos trills, several verses before the song hints that an interracial relationship led to violence. And on the latticework-delicate standout "Doughnut Song," she very plainly sings, "You told me last night you were a sun now with your very own devoted satellite/Happy for you, and I am sure that I hate you."

But while Amos certainly speaks universally on "Boys for Pele," the subtext is her own personal awakening. Many performers opt to keep their stage personas separate from their offstage identities, but Amos discovered this disconnect wasn't a performative defense mechanism; it was a sign that she hadn't embraced and assimilated the various facets of her individual self. "An emotional work like ["Boys for Pele"] is inspired from an emotional place; it’s about stealing fire from the men in my life," she told the New York Post in 1996. "I guess I didn’t realize how much confidence I have in certain areas of my life, and just so little in other areas. It seemed as though everywhere I turned was to male mentors or emotional involvements. I became a vampire needing to feed, needing their energy and I didn’t know how to access it. When I was onstage I could, but when I walked off that stage I began to see that the woman was completely divided and segregated from the work."

That reconciliation involves not only casting off the remnants of bad memories and influences—e.g., the "I shaved every place where you've been, boy" lyric on "Blood Roses," the phrase "Nothing's going to stop me from floating" repeated on "Father Lucifer"—but realizing that she needed to do some serious soul-searching. This produced the emotional bootstrapping of "Horses" ("They say that your demons can't go there/So I got me some horses to ride on") and the heartbreaking "Hey Jupiter," an intimate solo piano tune on which Amos confronts the blank-slate reality of being alone. But it also led to "In the Springtime of His Voodoo," a seductive cabaret song with a jazzy underbelly, pop culture references to "Star Trek" and the Eagles, and a decidedly sexual bent.

"In my relationships with men, I was always musician enough, but not woman enough," Amos told the Chicago Tribune. "I always met men in my life as a musician, and there would be magic, adoration. But then it would wear off. All of us want to be adored, even for five minutes a day, and nothing these men gave me was ever enough. So when it came time to make this album, I went to Louisiana, back to the South and the old-world church, to the place that deemed wrong Mary Magdalene and the shadow-sorcerer side in the Bible. I went to reclaim that hidden womanhood. Because you can't have grace without the whores."

It's a powerful thing to find inspiration and camaraderie in the lives of other women. In fact, the album's final song, "Twinkle," finds Amos meeting someone on the lam ("I killed a man T/I've gotta stay hidden in this Abbey") and realizing that this woman's resiliency is admirable: "When she twinkles—and she twinkles—and I sure can." But "Twinkle" also underscores that these role model women don't have to be perfect, morally or physically. In fact, the complexities mentioned throughout "Boys for Pele" are actually more ideal—and echo the Mary Magdalene story Amos wanted to explore. “I wanted to know why the blueprint of the Magdalene was not passed down,” she told the Baltimore Sun. “What was passed down was the whore that wiped Jesus’ feet. We skipped the whole phase of the woman -- having sexual desire, wisdom, passion. Being an equal to Jesus, in truth. I truly believe that there was a unification there, a representation of the wholeness. Man with his masculine and feminine in balance; woman with her feminine and masculine in balance. Two whole beings, joined together. The blueprint." Amos would explore these dualities—and how they conflict and cohere—on albums in the future. But on "Boys for Pele," she both discovered and amplified the depth of her inner strength, and ended up becoming a role model for women of all ages looking for guidance within an often-turbulent world.