Love, Sarah Palin: From Stephen Colbert to Trevor Noah, her return is a gift to late-night comedy

Here's hoping that Tina Fey stops by "SNL" this weekend in a very special wig, too 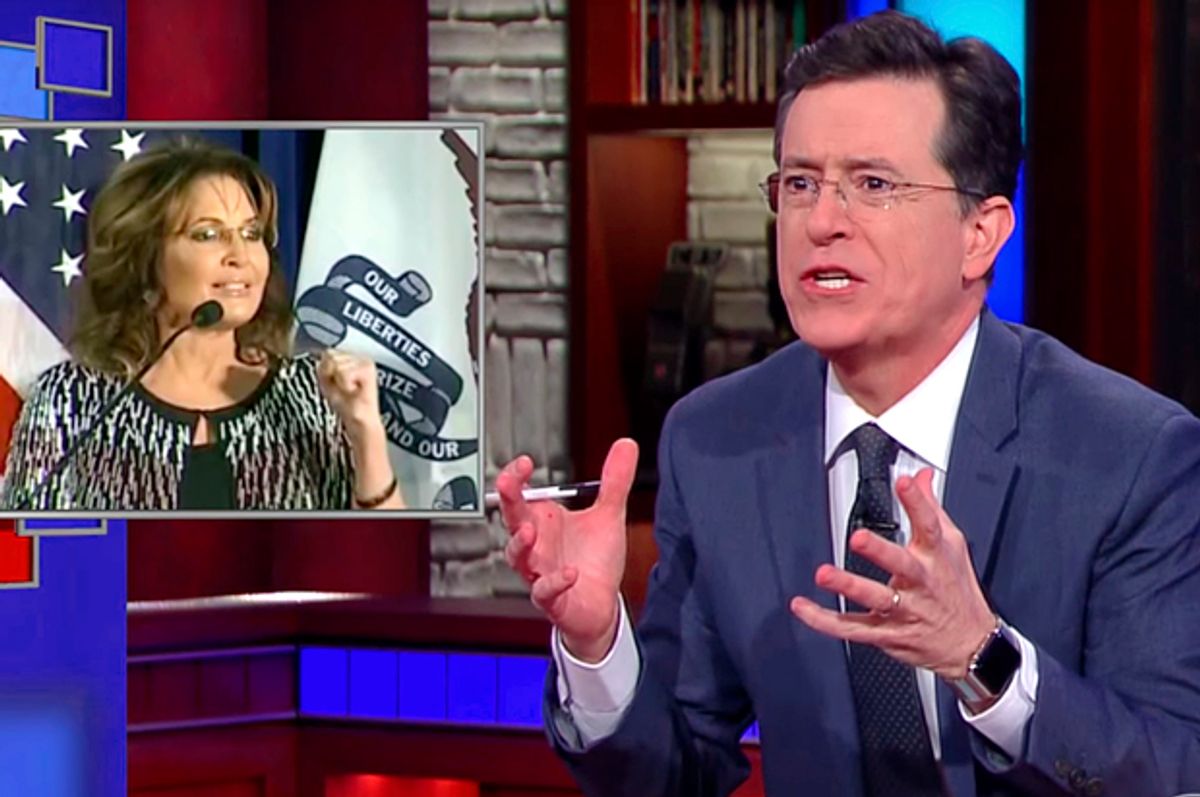 The only demographic of people happier with Sarah Palin’s endorsement of Donald Trump than the Tea Party are late-night comedians. The former vice presidential candidate is a constant fount of material—even more so than GOP frontrunner Donald Trump—because, as the Daily Beast put in a headline this week, she “murders irony”; she has no demonstrable modicum of self-awareness. Palin’s stump speech endorsing Trump is essentially its own comedic material. I mean:

… Now they’re concerned about this ideological purity? Give me a break! Who are they to say that? Oh tell somebody like, Phyllis Schlafly, she is the Republican, conservative movement icon and hero and a Trump supporter. Tell her she’s not conservative. How ‘bout the rest of us? Right wingin’, bitter clingin’, proud clingers of our guns, our god, and our religions, and our Constitution. Tell us that we’re not red enough?

Tina Fey, on “Saturday Night Live,” set the gold standard for mocking Palin in 2008, by immersing herself into the role. It was such a complete transformation that side-by-side, you might be confused between the two; Fey’s wig for the bit was the subject of its own New York Times article, because it was that strand-perfect. There is a new “Saturday Night Live” this weekend, and Fey has been known to come back to the show for special occasions; her turn as Palin could, technically, reprise.

Even if it doesn’t, there are plenty of other comedians jumping on the bandwagon, albeit with different approaches. Stephen Colbert, host of CBS’s “The Late Show,” spent seven minutes rejoicing in Palin’s reappearance for what it will give to his comedy, calling her “the original material girl.” Like Fey, Colbert’s comedic instinct is to fall back on performance art—except instead of Fey’s imitation, Colbert dropped the closest yet he’s been to his persona on “The Colbert Report,” where he played an ultra-conservative who embodied the right-wing’s hypocrisies. Indeed, if you didn’t catch the irony, it sounded like Colbert was praising her: “She has not missed a step! She is in the zone!” Colbert capped his enthusiasm with a long segment where he spoke “in tongues,” as he observes Palin seems to do in her long, rambling speeches. He was so moved, he even got up and danced.

Over on Colbert’s former home, Comedy Central, “The Daily Show With Trevor Noah” opted for more restraint. As Noah observed, he’s a newcomer to American politics, so for him, Palin is a new vision of horror. So in a pre-taped bit, the “Daily Show” correspondents sat Noah down and told him the spookiest ghost story, where “Old Man McCain” called up a spirit that returns if you repeat “You betcha!” in a mirror over and over again. Noah’s main tack is incredulity, which is fair; Palin boggles the mind. Other comedians, like Jimmy Fallon (“The Tonight Show”) and Jimmy Kimmel (“Jimmy Kimmel Live!”) have yet to tackle Palin extensively; I imagine we’ll see something soon from Seth Meyers (“Late Night With Seth Meyers”), who had Palin on his show just a few months ago, anticipating her sudden comeback.

In contrast, though, to the sketch comedians and jokesters that make up our late-night ranks, Larry Wilmore, of “The Nightly Show With Larry Wilmore,” has taken on the mantle of professorial disgust. In his first segment on Palin this week, he sat down with “Jameel deGrasse Tyson,” the fictional and dumber younger brother of astrophysicist Neil deGrasse Tyson, to investigate the science behind Palin. Last night, though, he went past comedy into pure exasperation—a tone that channels Jon Stewart, former host of “The Daily Show,” than anyone else. “God, not this again,” he began, lamenting that Palin was once again “nauseatingly relevant” enough to blame President Barack Obama for her son Track’s violent, PTSD-related outburst. Wilmore’s level, sarcastic gaze at the camera belies the fact that he is always funny, but unlike the other comedians here, he seems too pragmatic to be thrilled for Palin's return. He seemed genuinely frustrated last night, and with good reason; amidst the gibberish, Palin is railing against Planned Parenthood, immigration, and gun control. Wilmore's last line is closest to how I feel, anyway, delivered with a deadpan, gimlet eye: "Leave us the f**k alone."