Nobody has to “man up” here: Feminist shows “Jessica Jones” and “Transparent” are also a win for men

Despite the handwringing that media focused on women comes at the expense of men, the opposite is actually true 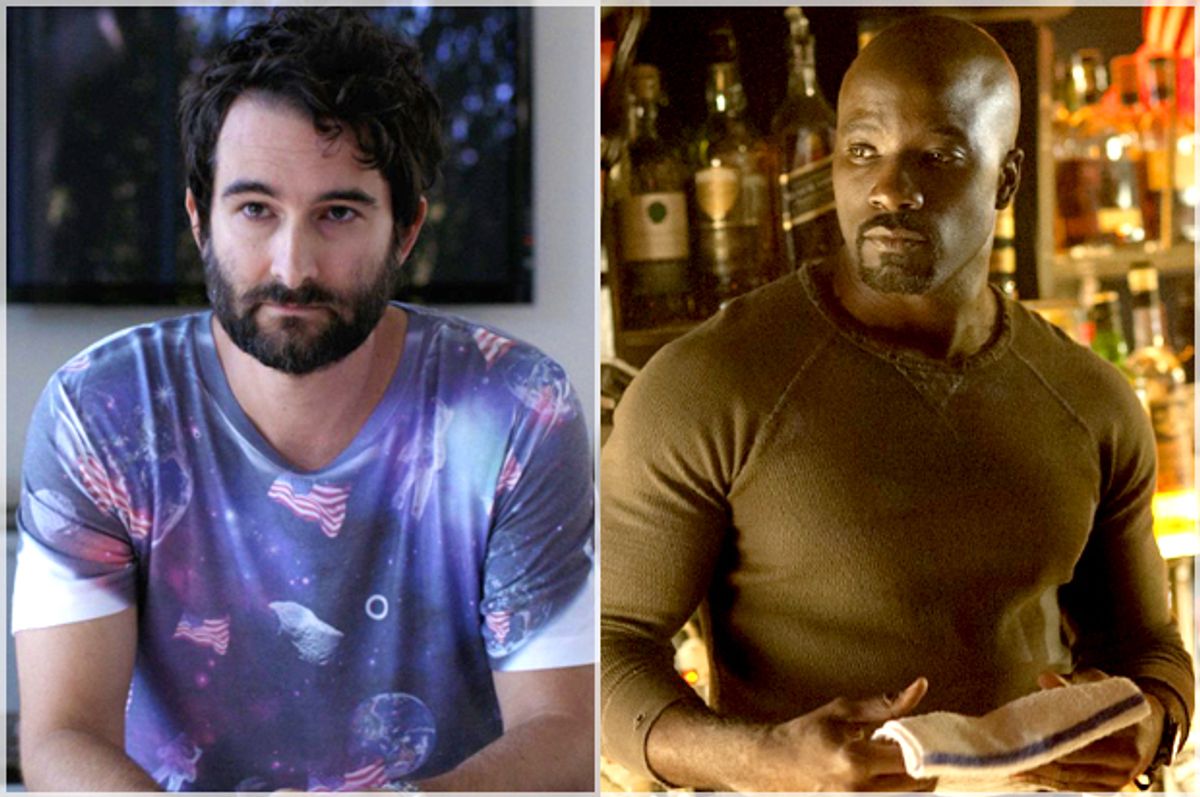 In the penultimate episode of season 1 of Netflix's "Jessica Jones," Malcolm, Jessica's fellow Kilgrave victim, brings their Robyn to the waters where he dumped her twin brother Ruben’s dead body. Robyn is horrified.

"We're Pisces, you know. It's a water sign. You know what the symbol for Pisces is?” Robyn clasps her hands together, “It's two fishes... swimming together... in an infinite circle. Ruben and I used to say that's how we were in the womb."

Throughout "Jessica Jones," Robyn is incredibly possessive of Ruben. In one scene, Jessica interrupts the twins fighting in their apartment to find a fully clothed Robin and half-naked Ruben squabbling over whether Ruben has washed his hands. “Mind your own business,” Robyn snaps, when Jessica tells them to stop being so loud.

Robyn is increasingly threatened by Ruben’s interest in befriending Jessica, wanting to keep her twin brother to herself. She frequently points to Ruben’s ineptitude as the reason for why he shouldn’t stray too far from her loving embrace.

"Jessica Jones" is very overtly about trauma. The main storyline of season 1 focuses on Jessica’s relationship to the villainous Kilgrave, who has the power to mentally control others to do whatever whatever he wants. He systematically rapes, maims, kills, and otherwise torments everyone he interacts with, all the while claiming that his actions are not in fact harmful.

One of the triumphs of "Jessica Jones" is that is presents a complicated portrait of love and abuse, one in which survivors cope with their individual traumas in any number of diverse ways. Though the main narrative thrust of Jessica Jones centers on Jessica’s relationship with Kilgrave, numerous subplots all deal with the theme of boundaries that are infringed, from Trish’s relationship with her own mom who beat her as a child, yet who still deeply wants to reconnect with her daughter, to the twins and their strange codependency.

“Now I don’t give a bag of dicks what kinky shit you’re into. Just be into it quietly,” Jessica warns Robyn, as she lifts her up by the throat and pushes her into the wall.

Ruben’s neediness and Robyn’s need to control Ruben’s every move is depicted as deeply dysfunctional, but many viewers have seemed reluctant to characterize Robyn’s behavior as abusive, even though within the fabric of the Jessica Jones universe both men and women are shown to be survivors. Our collective response to the way that Ruben is treated on Jessica Jones highlights how just as society often dismisses female rape victims, society also questions whether men can truly be victims at all.

Over the past year we’ve seen tremendous anxiety about whether literature, film, and television that focuses on female characters comes at the expense of men. In films like "Mad Max: Fury Road," "Star Wars: The Force Awakens" and the upcoming Paul Feig-helmed "Ghostbusters," for example, the female experience is moved front and center. To critics, the inclusion of women in previously male-only spaces seems to imply that men are devalued and pushed to the side. But a close look at many self-described feminist programs proves the exact opposite: that in the vast majority of feminist media, male characters are treated with empathy and nuance in the same way that female characters are.

You can see this in how in "The Hunger Games," Peeta is presented as Katniss’s emotional anchor, even as she often takes the more stereotypically “masculine” role. And you can see it in how in "Mad Men," which I would argue is an overtly feminist program, we still follow the trajectory of many diverse, complex male characters, including the show’s primary protagonist. In the aforementioned, Jessica Jones, we encounter a very nuanced male villain who is as charming as he is evil. He also comes with his own backstory of abuse. Likewise, Luke Cage is presented as vulnerable and strong in equal measure, both capable of protecting Jessica, while also relying on her for support and protection.

The insistence that men can be strong and vulnerable at the same time without risking their masculinity is at the heart of each of these programs. In particular, each show takes a very empathetic look at the men who experience trauma and need to navigate personal pain in a world that views sadness, gentleness, and open-heartedness as feminine and weak.

In both Seasons 1 and 2 of "Transparent," for example, we learn how Josh’s experience of being sexually abused by his babysitter Rita as a very young teenager shaped his understanding of the world around him. We also learn how society never takes his confusion or pain very seriously. Josh’s parents don’t tell him when Rita came to them with news of her pregnancy. Instead they sweep the issue under the rug and pretend it never happened. When Maura reflects on giving money to the pastor who adopted Josh and Rita’s son, she actually seems to pity Josh’s rapist more so than her own son, saying they had to do something to help, “that poor girl.”

One of the ways that "Transparent" particularly excels at humanizing all its characters is by pushing back against sanitized narratives, in favor of more complicated ones. In doing so, the series provokes the viewer into questioning sacred cows of our culture, including some of the sacred cows of feminism itself. Maura is not a “perfect” transwoman, any more than Ali is an ideal feminist. Both have moments are great empathy and ridiculous petulance. Both have the propensity to be incredibly selfish. This deliberate movement away from cheery PSA visions of what it means to be a member of the LGBT community does a lot to humanize all the characters. When a few years ago, Macklemore’s song, “Same Love” rose on the charts, the emphasis on brotherhood and the overwhelming simplicity of love that is only made complicated by society rendered the call for social justice a little watered down. “Love is gentle, love is kind” ran the Corinthian’s refrain like a Mr. Roger’s message.

In contrast, "Transparent" presents a world where love is often anything but kind and gentle. Instead, love is presented as a constant negotiation of boundaries. Sarah is more interested in snooping around her ex-husband’s house than spending time with her children. When Shelly learns that Josh and Raquel lost the baby she starts to wail that it is all her fault. “It’s not about you,” Josh tells her tersely. Maura’s spreading her wings is particularly painful to watch in regards to her relationship with Shelly, who desperately wants to reconnect with the person she married. When she asks Maura to finger her the way she used to when they were married, Maura accepts because she feels power in giving her pleasure, but then abruptly leaves when Shelly offer to return the favor. In one especially caustic scene, Shelly tries to connect with Maura by finding a show they can both watch on TV together. As she goes through more and more options Maura becomes more and more frustrated. “Make yourself happy,” she says harshly.

Josh, the last male cis-gendered character of the Pfefferman clan, is treated with as much nuance as any of the other characters on the series. We see him act out in season 1 using sex and alcohol to numb his pain. We also see him try to cope with trauma in season 2 by inviting Raquel to start a family with him and his biological son Colton. His struggle to “man up” and take responsibility for his son is complicated by the fact that his first formative experience of love was born of someone who took advantage of him. While many viewers see Josh as the last bastion of male privilege on a show of female characters, in reality Josh’s privilege is clearly presented as a double-edge sword. He is never allowed to fully mourn the abuse he experienced by his female babysitter because society never truly allows him to. Even Colton’s adoptive parents claim he abandoned his child, and when Sarah, Ali and other family members refer to Josh’s experiences as abuse, they do so in a joking, rather than empathetic manner. His parents both try to protect Josh by hiding evidence of abuse, rather than helping him to actively grieve.

In one of the most heart-wrenching scenes in season 2, Josh, who had been trying to avoid sharing information about how his relationship with Raquel is over, ends up telling his family that Raquel is not coming to Yom Kippur and that they lost the baby and weren’t seeing each other anymore. In a show where comments from characters are often barbed or selfish, Maura says to him kindly, “It’s okay to be sad.” Josh resists her, “I don’t need your permission,” he says, withdrawing into himself even deeper.

Later, Shelly’s new boyfriend Buzzy offers Josh permission to mourn, though goes about it in an entirely different way, offering Josh the opportunity to grieve the death of his father. After first protesting that it is not “politically correct” to say such things, Josh eventually collapses into tears in Buzzy’s arms, and is finally able to cry.

Josh’s response to this fatherly gesture is seemingly instinctual, even though it’s also clearly a performance, a gesture of fatherly love that Josh is desperate for. The action of taking on the role of father figure is incredibly moving for Josh, whose grief has always made him feel isolated and alone. This is true even though Buzzy is still a newcomer into Josh’s life. He doesn’t understand the depth of Josh’s various kinds of grief. He only knows that Josh needs some type of kind, masculine presence at a time when everything in Josh’s life seems to have fallen apart.

Moving scenes like this one puncture the myth that presenting shows that center of the lives of women come at the expense of portraying sensitive, nuanced depictions of what it means to be a man. After all, the great question of "Transparent" is how we learn to see one each other for who we really are outside of the pageants we put on for each other, and how sometimes we become who we are precisely because of our willingness to perform. By treating the performance of masculinity as equally worthy of analysis, feminist shows like "Transparent" and "Jessica Jones" end up respecting rather than dismissing male characters, and also show us the importance of presenting male and female characters who are, above all, human.