Sarah Palin misses the point: Forget scoring points on Obama, think about the women and girls in Track's life 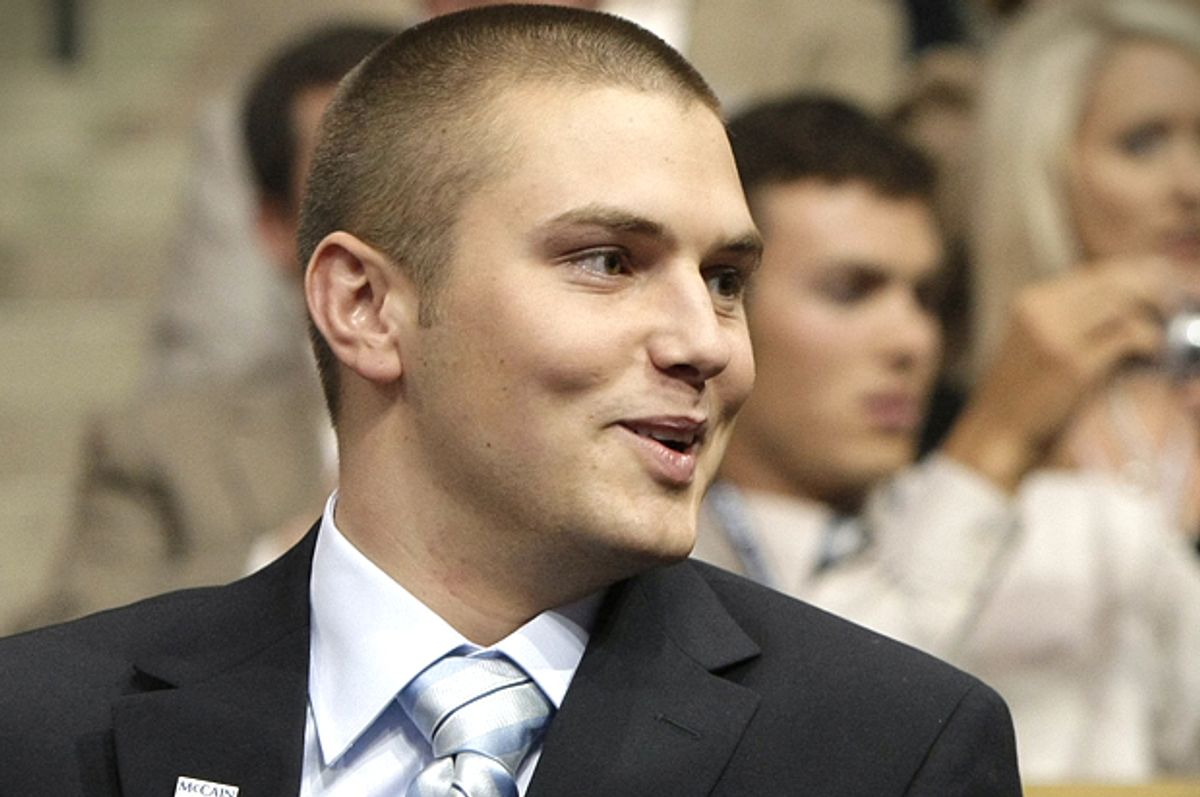 Even within a week in which the entire family seems incoherent at best and abusive at worst, let's remember that not every person with the Palin last name is reprehensible. So spare a kind thought this day for Kyla Grace Palin — Sarah's grandchild and Track's five year-old daughter.

There's been a deluge of headlines about 26 year-old Iraq veteran Track Palin this week, thanks to his arrest for "fourth-degree assault, fourth-degree misconduct involving a weapon and interfering with a report of domestic violence" after an incident involving his current girlfriend. Police reported finding Track, who tested with a blood alcohol level of 0.189, "uncooperative, belligerent, and evasive," and his girlfriend with "bruising and swelling around her left eye." They also found an unloaded AR-15 on the premises. The girlfriend claimed Track had brandished it and threatened suicide.

Soon after, Track's mother, malfunctioning robot Sarah Palin, spoke out and alluded to the incident in her trademark manner, saying, "When my own son is going through what he goes though coming back, I can certainly relate to other families who feel these ramifications of PTSD." And then she basically blamed Obama.

While much of the conversation in the whole media crapstorm has focused on the volatile Track —  in 2014, cops called to an incident at an Anchorage party described him as "belligerent… angry and intoxicated" — and his nonsensical mom, what's been less discussed are the other females in Track's life. Sarah Palin, for instance, somehow found the energy to express her fury that "It is now or never for the sake of America’s finest that we have a commander-in-chief who will respect them. They have to question if they’re respected anymore." Yet she seemed to somehow forget the question of respect for say, women who may find themselves on the receiving end of fists, or the children of those men she says are feeling the "ramifications of PTSD."

Track Palin and Britta Hanson wed in May of 2011. Their daughter Kyla was born three months later. The couple jointly filed for divorce the following year. At the time, Hanson diplomatically told Radar, "We want to keep our personal lives private and we don’t want to say anything about each other or the situation." TMZ reported that Britta received physical custody of their daughter and $642 a month in child support, while sharing legal custody of the girl with Track. Speaking this week with Radar, Hanson said only that she and Track "are on speaking terms. We have a cordial relationship about our daughter. That is as far as it goes."

How cordial it can remain is yet to be seen. In a feature this week on the "Fallout From Track Palin's Domestic Violence Disturbance," Dr. Paul Hokemeyer told Yahoo Parenting, "Fathers who attack women are untrustworthy and unsafe. The message they convey to their daughters is that women are inferior creatures, unworthy of respect, who need to be surrogated to male power with force and pain. It’s a horrific legacy."

Britta Hanson's current discretion and refusal to make her child a pawn for tabloid speculation suggests Kyla has at least one responsible parent. But the fallout of Track Palin's actions will no doubt continue to be felt by his former wife, his daughter, and his girlfriend. They're the ones who will have to figure out what his behavior means to them, and how it affects their relationship with him going forward. And yet they're the ones, in all the stories, who hardly get mentioned at all.