Under Obama, women had reached "critical mass" in high positions. So why did they still feel excluded? 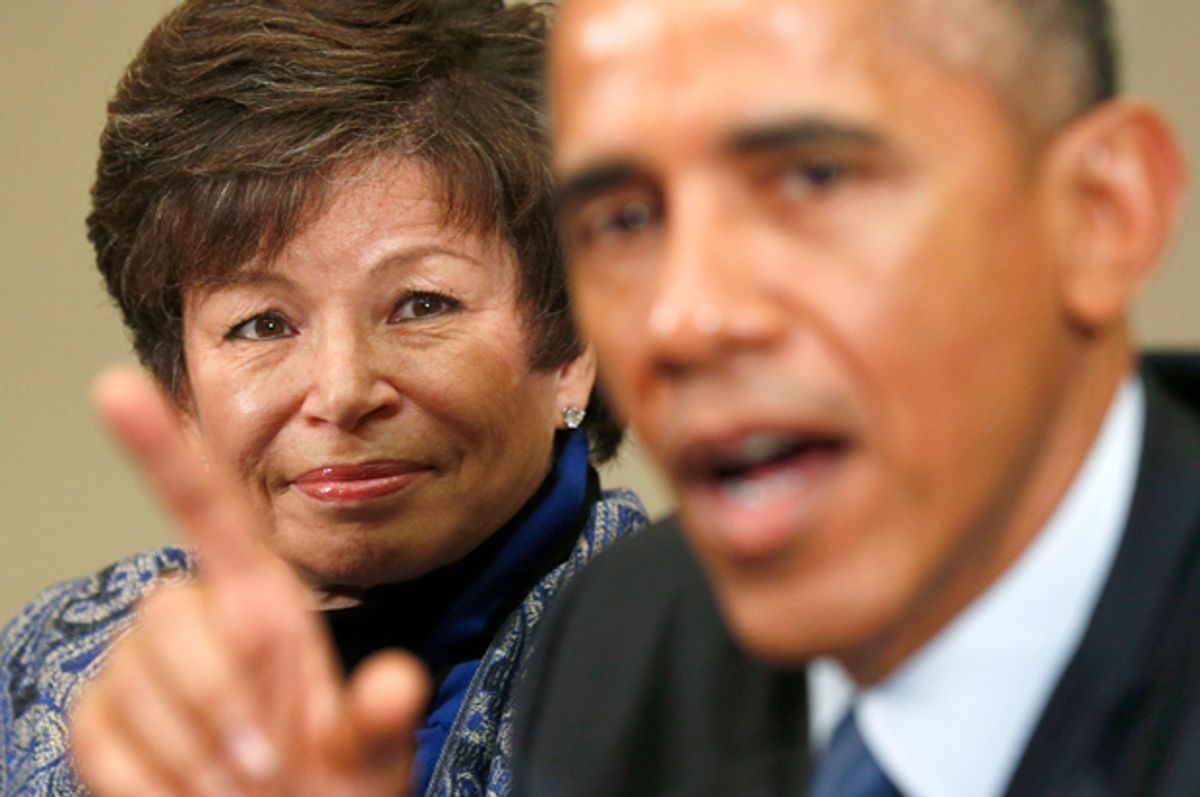 It's no secret that one of the oldest Boy’s Clubs in the country meets in the West Wing of 1600 Pennsylvania Avenue. A bastion of male power so obdurate and so famous it has become shorthand for male careers that have shed wives and children—perish the thought of a female amid the smoke-filled rooms.

Obama, raised by a strong and independent single mom and the father of two daughters with his formidable spouse, had promised to change that image. He appointed Stephanie Cutter as his top communications adviser; Valerie Jarrett was his most important confidant; and he put eight more women in vital senior roles. Thirty-nine percent of Obama’s West Wing staff was female, a 10-percentage point increase over the end of the Bush administration.  For the first time ever, women had reached what scientists and sociologists call "critical mass" in top positions in the West Wing.

Typically critical mass happens when a minority group reaches between 20-30 percent of an institution, whether it’s a legislative body, a corporate board, an appellate court or the West Wing. Reaching critical mass generally triggers a perceptible change. It allows previously underrepresented groups to have their voices heard and their presences felt.

But the West Wing was different. While the newly appointed women in Obama's White House had the raw numbers, they were still having a hard time getting in the room. They raised the issue on several occasions, and even expressed their frustrations to the president, but the problem persisted. By the end of Obama’s first year, the acrimony became so pronounced that several newspapers ran stories full of unhappy quotes about how the Obama administration was treating its top female staffers. The president invited the women to air their grievances at a dinner at his private residence on the second floor of the White House. Obama listened carefully but did not offer to admonish or replace anybody. “He didn’t totally defend bad behavior,” said a participant, “but he didn’t say, ‘You’re right.’”  He advised the women to step up their game.

Almost offhandedly, as the dinner came to a close, the president suggested that the women start getting together regularly. Maybe they could build their own power base. Up until that point, none of the women had had time to form friendships on the job, and few had known each other well before starting at the White House. The pace was so frenzied, they’d had little opportunity to spend time together outside of work. But they took the president’s advice and began scheduling monthly dinners. They began to form a team where none existed in the White House.

“The White House is a hard place at times and being able to talk to someone else, to strategize on an issue often helped,” said Lisa Brown, then Obama’s staff secretary. “The women were much more about being team players—the president’s team,” said a high-ranking woman. “The guys, it was about their own agenda.”

Brown, followed by domestic policy adviser Mona Sutphen and others, began to alert women when she saw they were being excluded from meetings. The women started reinforcing each other’s points at meetings, noting when men repeated to much fanfare a point that had been made earlier by a woman. They gave advice to one another on what to wear, how to act, when to speak up and when to sit down. In short, they achieved critical mass: By the end of Obama’s first term in office, and certainly in his second term, the women of the West Wing were a force to be reckoned with.

The breakthrough moment came in the summer of 2011, when President Obama and House Speaker John Boehner were pushing for a grand bargain budget deal. For a month, his top male staffers involved in the process would walk into the Oval Office to hold impromptu sessions with the president whenever a new idea struck them, or they’d turn to the topic in an unrelated meeting. Whether or not it was intentional, the result was that Obama’s top female staffers were being cut out of the negotiating process.

Deputy chief of staff for policy Nancy Ann DeParle, deputy chief of staff Alyssa Mastromonaco, who controlled the budget, and senior communications advisor Stephanie Cutter grew increasingly frustrated. They half-jokingly proposed just barging into the Oval Office, musing about the looks on the men’s faces if they walked in uninvited—but no one really thought it was a good solution.

Then one Sunday they heard through the ladies’ underground railroad that there was a meeting in progress between Chief of Staff Bill Daley and top political adviser David Plouffe. Mastromonaco, DeParle and Cutter gathered outside the Oval Office, took deep breaths and did together what they had considered a few years before utterly unthinkable: They opened the portal to world power—the door to the Oval Office—walked in, sat down and began participating.

“The president was like, ‘Hi guys,’” said a person who was present. “Everyone pretended like nothing was amiss. Nobody ever said anything.”

But the men, and the president, got the message: The women were never excluded again. Ultimately, the Grand Bargain failed, but for the women in the West Wing, it was a watershed moment: They finally broke into the room.