Hillary has nothing to brag about: Her foreign policy record is a disaster

She may have a wealth of experience on the international stage, but her judgment has proven wanting time and again 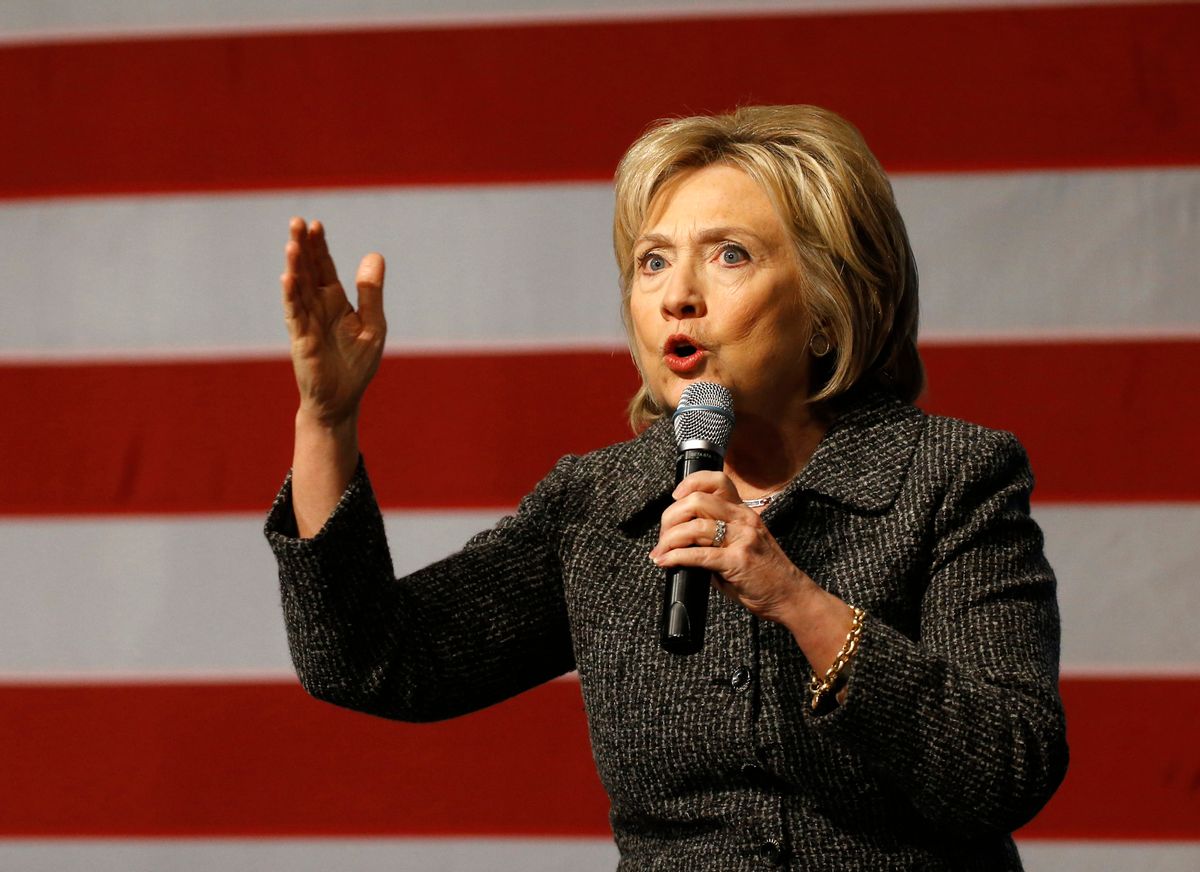 Tuesday the Clinton campaign released a signed letter by ten prominent diplomats and career national security wonks backing Clinton for President and calling Sanders foreign policy expertise into question. The letter was both unsurprising and underwhelming. Unsurprising because it was signed by former Bill and Hillary Clinton appointees (half of whom have connections to weapons contractors and all of whom will be looking for work in January 2017) and underwhelming because she could only muster ten signatories. This isn’t to say there aren’t legitimate critiques of Sanders’s foreign policy - there certainly are - but as the democratic primary race heats up with only days until the first primary, Clinton and her partisans are doubling down on the conventional wisdom she can pass the “Commander-in-Chief test" due to her foreign policy experience - a consensus widely shared by registered Democrats, 72% of whom trust Clinton over Sanders on matters of "foreign policy".

There’s only one problem: this consensus is entirely without objective merit.

The entire notion of “foreign policy” experience is based more on vague impression than reality. What matters above all, as Obama rightly insisted in 2008, is judgment not “experience”. In the case of Clinton there hasn’t been a major foreign policy decision in the Middle East she pushed for that didn’t end up being a disaster both at home and the countries she advocated meddling in. The most commonly cited “mistake” was her support for the Iraq war which is one of the main reasons she lost the nomination the first time around. But even if one excludes this. Even if one puts it into a memory hole and buries it along with her support for DOMA, welfare reform, and harsh prison sentences, the choices she’s made after 2008 show she not only didn’t learn any lessons from that war but has only grown more bellicose and hawkish. From her advocating regime change in Libya, to arming dubious opposition forces in Syria, to undermining peace with Iran -- Clinton has consistently been wrong on foreign policy even after her supposedly humbling loss of 2008.

Politics deals in impressions, approximants and nowhere is this more clear than on matters of “foreign policy” - a topic where those wrong are more likely to rise to the top. William Kristol, Thomas Friedman, Dan Savage, all of whom were colossally wrong about the Iraq War, are currently working in cushy pundit jobs while those in the media who sounded the alarm like Peter Arnett and Phil Donahue were relegated to obscurity.

Longtime Clinton ally Ann Marie Slaughter was asked on Bill Maher in October what achievements Clinton could point to as Secretary of State. Her answer? Clinton's championing for regime change in Libya - a foreign policy “experience” that has reduced Libya to a failed state run largely by ISIS and other jihadists. A point Sanders himself made, going after Clinton aggressively in the December debates over the matter.

In fairness, Sanders did tacitly support the invasion and the fact that one of Clinton’s most notable boosters can only point to the bombing and destruction of another country as evidence of foreign policy “achievement” says more about the toxic nature of the U.S. national security consensus than Clinton as such, but those insisting she has come up the ranks in some type of “foreign policy” development league and thus has some essential “experience” still have all their work ahead of them.

One does not need even to look as far back as Libya in 2011 to see Clinton embracing wreckless, hawkish positions in the Middle East. As of this moment Clinton is calling for a no-fly zone in Syria - an act that would by definition, involve the US potentially shooting down not just Syrian planes but Russian ones as well. If this looks like regime change, that’s because it almost certainly is, According to one 2013 Defense Department estimate a no-fly zone over Syria would entail bombing Syrian military infrastructure and would require over 70,000 servicemen -- and this was before Russia entered the war last fall. The costs are almost certainly much higher now.

A “no fly zone” is a vaguely liberal way of calling for the air invasion of another country. It’s a position, though embraced by Jeb Bush and Marco Rubio, both Sanders and Obama have dismissed out of hand for being irresponsible and unrealistic. Even here Clinton attempts to weasel out of this neocon stance by insisting, as she did to ABC moderator Martha Raddatz in December’s democratic debate, that implementing a no-fly zone in Syria would not require shooting down Russian planes because Russia would “join us”. This, to anyone who has a cursory understanding of the Syrian conflict, is absurd. Why would Russia betray its ally of 44 years and become a US client state on a dime? They wouldn’t, which perhaps explains why Clinton dropped the no-fly zone rhetoric altogether in the subsequent debate on Sunday night.

Even longtime liberal hawk Jeffrey Goldberg was confused, tweeting, “Still trying to understand Hillary’s point re: no-fly zone shared with Russia, which supports Assad’s air force. Not getting it.” Once again, Clinton’s “wonkish” posture is built primarily around using Presidential sounding terms like “no fly zone” rather than bothering to make any sense. This is the product of someone looking to play a role rather than earnestly convey the complexities of the situation at hand. To make matters worse, her bellicose posturing on Syria could very well be undermining efforts for peace. As both sides of the conflictprepare to renew peace talks next Monday in Geneva, imagine being a Russian diplomat and hearing the odds-on-favorite to replace Obama threatening tacit war against you on January, 20th 2017? Even if the Russians assume it’s just election year bluster, why take that risk? Once again, simply playing the role of “tough” statesman is valued over coherence and de-escalation.

Ms. Clinton is also working, albeit more subtly, to undermine Obama’s position on Iran. The day the U.S. and Iran celebrated finally lifting sanctions that had crippled Iran for years, Clinton proposed more sanctions to appease neocons in Washington and look “tough” on Iran. And, again, what kind of message does this send the Iranians - whom Ms. Clinton says she’s proud to call “enemies” - while Obama is finally putting an end to the years-long row. Clinton does nominally support the Iran Deal (not doing so would certainly be too far) but she has taken many opportunities to level passive aggressive criticism of it all while proposing even more sanctions on Iran, a position even former Iranian political prisoner Shane Bauer called “totally irresponsible”. In 2008 Clinton mocked Obama for saying he would talk directly to Iran, a decision that allowed the nuclear inspections to ultimately, seven years later, to be put in place. Again, her judgement was wrong on a key foreign policy issue which, because she now supports the deal, means this is the case even by her own standards.

When asked at a campaign rally Tuesday if he thought Clinton had foreign policy experience, Sanders replied, “No one can deny that Secretary Clinton has a lot of foreign-policy experience. But experience does not necessarily equate to judgment. Dick Cheney had a hell of a lot of experience”. It’s a harsh pot shot but an entirely fair and accurate one. “Experience” simply means one has been in politics enough to keep busy and not get involved in a meaningful scandal. Washington doesn’t punish being wrong, it punishes being bad at politics and public relations. Valuing experience without a critical examination of what one did to get that experience is like giving the NBA MVP award to the player who took the most shots. What matters, or at least what ought to matter to voters, is judgment - how often someone is right. And on this Clinton has been consistently wanting. On Iraq, on Libya, on proxy wars in Syria, on her support of Saudi and Egyptian tyrants, Clinton has frequently been on the disastrous and disabling side of history. “Experience,” Oscar Wilde once quipped, “is the name everyone gives to their mistakes”, and it’s increasingly clear that too many people have suffered from Clinton's experience for us to consider it anything other than a downside.