They're still lying about Ronald Reagan: What Trump, Cruz and the GOP field won't tell you about Reaganomics

We know the results of Reagan's tax and spending policies. So why do GOP presidential candidates keep pushing them? 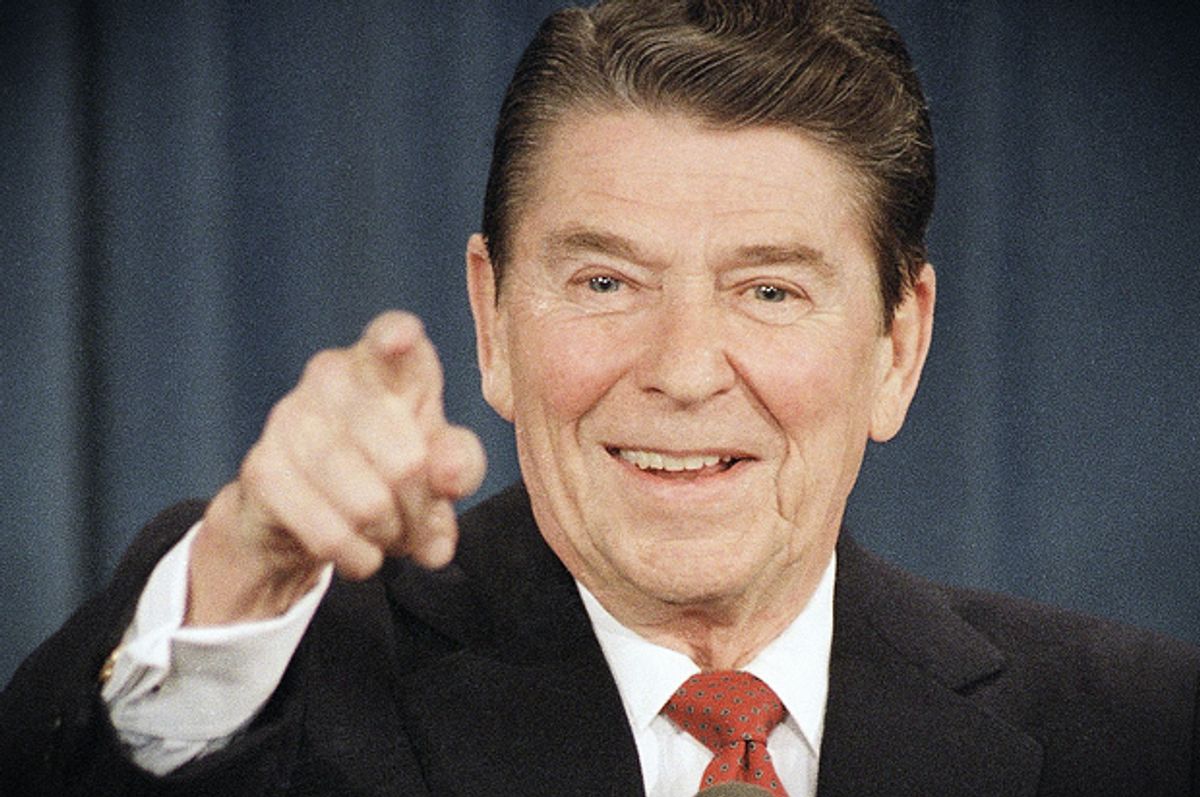 Every candidate in the GOP presidential race is running on the same economic platform: slash taxes, slash spending, slash regulation. It’s the Republicans' special formula, guaranteed to spark prosperity and opulence for all. At recent debates, candidates have said things like this:

Marco Rubio: “It begins with tax reform… It continues with regulatory reform. Regulations in this country are out of control… I'm going to side with Ronald Reagan on this and not Nancy Pelosi.”

Ted Cruz: “You pass a tax plan like the tax plan I've introduced: a simple flat tax, 10 percent for individuals, and a 16 percent business flat tax, you abolish the IRS... it produces economic growth.”

Ben Carson: “A flat tax for everybody… get rid of the incredible regulations — because every regulation is a tax, it's a — on goods and services... It's the evil government that is — that is putting all these regulations on us so that we can't survive.”

Donald Trump: “[Corporations are] leaving because of taxes, but they are also leaving because they can’t get their money back.” ("We don't win anymore. Our taxes are too high. I've come up with a tax plan that many, many people like very much... I think it'll make our country and our economy very dynamic.")

John Kasich: “If you cut taxes for corporations and you cut taxes for individuals, you’re gonna make things move, particularly the corporate tax... Regulations are… in a position where they’re smothering people.”

Chris Christie: “It would not necessitate us raising any taxes… I've vetoed more tax increases than any governor in American history.”

Jeb Bush: “We… cut the rates down. A corporate rate of 20%... On the regulatory side I think we need to repeal every rule that Barack Obama has in terms of work in progress, every one of them.”

Deregulate the private sector, shrink taxes for everybody, but especially corporations and the rich. America has been here before. These ideas are not new. Throughout the 1920s, they were policy.

Calvin Coolidge, president from 1923-1929, derided and disdained regulation. He appointed commissioners to the Federal Trade Commission and the Interstate Commerce Commission who did virtually nothing to referee business activity. Under Coolidge, the federal regulatory state was “thin to the point of invisibility.”

The 30th president was also a proponent of “scientific taxation,” the idea that lower taxes increase government revenue. Coolidge drastically cut tax rates for the wealthy. In 1923, the top income tax rate was 73%. By 1925, it had been slashed down to 25%. The corporate (aka business) tax rate hovered between 10% and 14% during Coolidge’s terms, and total government tax revenue (local, state, federal) was just 5% of GDP.

So how did the economy react under the exact policies the Republicans are running on today? By cutting taxes and regulation that "smother people," did the “evil government” finally get out of prosperity’s way? As Cruz said at the fourth debate, did those “1920s with Calvin Coolidge” produce “incredible economic growth?”

Well, from 1925-1929, the economy and the stock market definitely boomed. But something else was booming too. Throughout the 1920s, inequality soared to unprecedented levels. Working-class wages slowed, people struggled in poverty and debt, family farm foreclosures were on the rise, and the workforce experienced long periods of un- and underemployment. By 1929, the top 1% of wealthy Americans owned a whopping 39% of the world’s wealth.

The Roaring Twenties were not roaring for everyone.

Additionally, this alarming economic inequality was fueled by unstable growth. In 1929, the brewing crash came to fruition, and the towering bubble blown by hundreds of thousands of unrestrained financial actors, acting in their own independent interests, popped.

It's been the same throughout American history. Implementation of lax regulation and super low taxes for the rich is correlated to exactly what happened in the 1920s: severe economic inequality, an unsustainable “sugar high” in the economy, and a large collapse followed by a period of recession (Roaring, Crash, Depression).

After the 1929 economic catastrophe, America had a liberal revolution. In 1932, a wave of Depression-fueled populism swept the nation, propelling a socialist Democrat by the name of Franklin D. Roosevelt into office, and a Democratic Congress along with him. That wave stayed high for the next 36 years, from 1932-1968 (FDR to Nixon), with voters consistently keeping Democrats at the nation’s executive and congressional helms.

The “tired ideas of the past” that Rubio attacked in the fourth debate produced a thriving (for people of a certain color, at least) time in American history; the “again” in Trump’s favorite catch phrase. College kids could work their way through school, parents could provide for their family on a high school education — the middle class was flourishing.

Because America had left the laissez-faire and low-tax policies of Calvin Coolidge far behind: the market was now steeply regulated and the super rich taxed at a rate of over 90%.

But, starting in the ’70s and ’80s, as the conservatives took back control of the Senate and the White House (and used religion to do it), making law the deep tax cuts and deregulation of the economy central to Republican economic theory, income inequality began to rise and economic bubble after economic bubble was created.

As economist Paul Krugman outlines, “The whole era since 1985 has been one of successive bubbles. There was a huge commercial real estate bubble in the 80s, closely tied up with the S&L crisis; a bubble in capital flows to Asia in the mid-’90s; the dotcom bubble; the housing bubble; and now, it seems, the BRIC bubble. There was nothing comparable in the ’50s and ’60s… So what was different? The answer seems obvious: financial deregulation… Banks were set free — and went wild, again and again.”

The Republicans, thrown out of office by the electorate after the ’29 Crash, were back in control to tilt the playing field once again. The administrations of Richard Nixon and Gerald Ford, followed by economically conservative Democrats Jimmy Carter and Bill Clinton, began instituting policies of deregulation and de-taxation, thus beginning again the cycle of boom and bust.

The only reason the economy didn’t crash with the stock market in 1987 and 2001 is because, as Robert Kuttner, journalist and economist, testified to Congress, “[The Federal Reserve] races to the rescue… [bailing] out the speculative system, so that the next round of excess can proceed. And somehow this is scored as trusting free markets, overlooking the plain fact that the Fed is part of the U.S. government.”

Conservatives tout the idea of the "free market," the concept that the economy would flawlessly self-regulate if only the big, “evil” government would stop, as Cruz said in the fourth debate, “descending like locusts” with “armies of regulators.”

But the deregulation of the market has not created a beautiful, effortless, self-regulating economy. It has instead forced the Federal Reserve to act time and time again when the market inevitably fails. After the 2007 crash, this economic theory made the American people bail Wall Street out.

Laissez-faire economics simply does not work as well as conservatives say it does.

Even Ronald Reagan, often pointed to by Republicans as evidence that supply-side economics works (“I side with Ronald Reagan on this,” as Rubio said at the debate last night), realized that Reaganomics damages the economy.

After the Republican darling cut taxes in 1981, a budget deficit ballooned, and Reagan ended up signing “probably the largest peacetime tax increase in American history.”

Ronald Reagan is quite the opposite of a boon for the low-tax, low-regulation argument: he was actually responsible for a historically large tax increase.

The historical evidence is clear, and with economists actively warning against the Republican economic plans that “deny fiscal reality,” “benefit the wealthiest Americans” and “ensure that the top 1 percent comes out way ahead," there is absolutely no reason for Americans to be caught in a debate over which Party has the better economic policy.

Even though we know this, even though the truth is plain, America is caught, cycling itself through one grand, pointless economic loop.

Thanks to the Republicans, this country looks an awful lot like it's been transported back 95 years.

Politicians have sliced taxes and gashed regulation (although thanks to the Obama administration this has slightly waned); the economy has undergone the worst recession in recent history; taxes on the wealthy have been slashed, loopholes preserved and the Bush tax cuts made permanent; regulations have been destroyed, in part because of the worldview of Alan Greenspan, who has personally admitted to being wrong (Dodd Frank doesn't go far enough to rein in the greed); wealth is again soaring to the top 1%; the Republicans are again in control of Congress, and, even they don't have the presidency as they did in the 1920s, they are stopping the current one from signing progressive tax legislation into law.

America got it right a few decades ago. As economist Thomas Piketty explains, the “progressive taxation of very high incomes and very large estates partly explains why the concentration of wealth never regained its astronomic Belle Époque levels after the shocks of 1914-1945."

And the country is getting it wrong now. As Forbes' Joseph Thorndike writes, “The decline in high bracket [tax] rates since the 1980s — a phenomenon particularly evident in the United States and Great Britain — has helped boost incomes for the very rich in both countries.”

The economic agenda the Republicans are pushing today creates growth that no democratic society would want for its people: highly unstable and channeled into the hands of the wealthy few.

Far from spreading economic prosperity to all, as the Republicans claim, conservative supply-side/laissez-faire Reaganomics inflames inequality and crashes the economy.