The dream of the ‘90s is alive on TV: "The X-Files," "Full House" and "Twin Peaks" revivals feed off a lost sense of mystery

Nostalgia summoned "The X-Files" into the iPhone and Reddit era, and the old magic still works 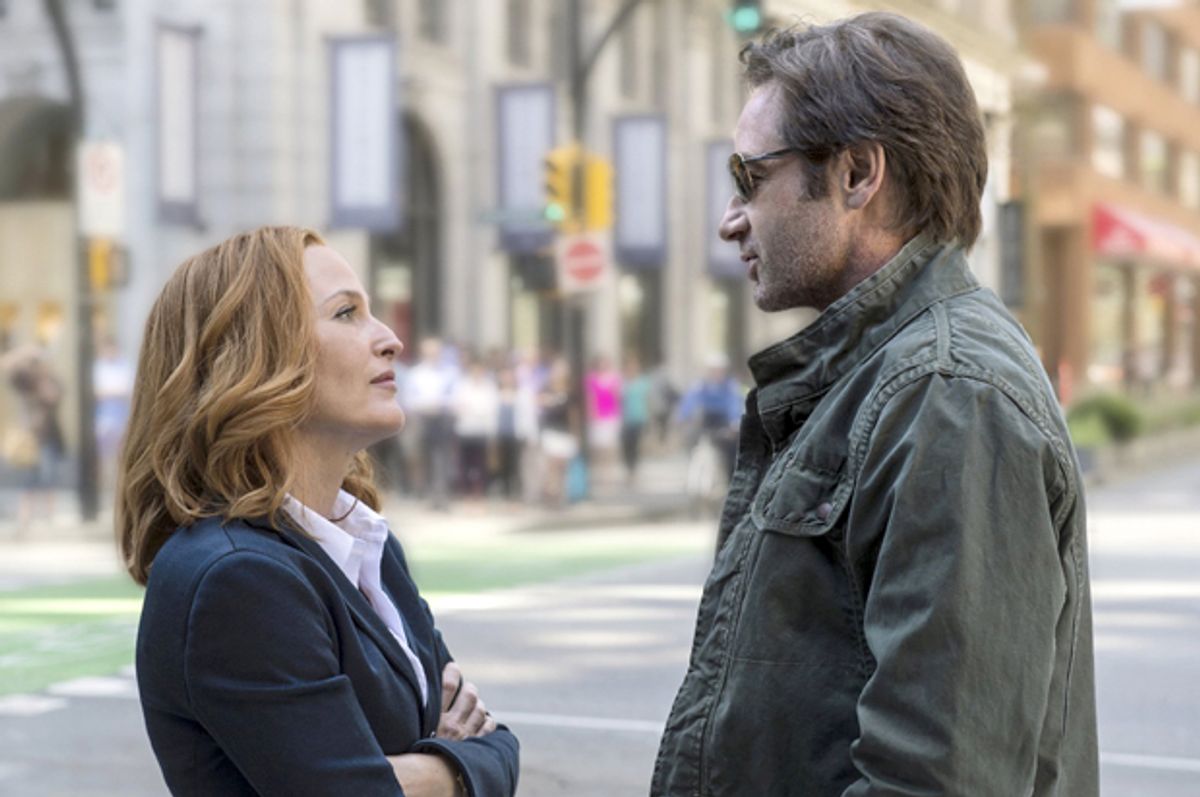 Gillian Anderson and David Duchovny in "The X-Files" (Fox)
--

In the third episode of “The X-Files” event series, the joke is that Fox Mulder (David Duchovny) has a smartphone. The retired FBI agent and lifetime conspiracy theorist has presumably had a smartphone for a little while—in the first episode, “My Struggle,” he successfully swipes his touchscreen to reply to a text from Assistant Director Walter Skinner (Mitch Pileggi). But in the third episode, “Mulder and Scully Meet the Were-Monster,” it’s revealed that Mulder has an extraordinarily limited understanding of the camera features of his phone. Hilarity (no, really) ensues. “The X-Files” isn’t known for being a funny show, but was at its best when it could mine the paranormal anxiety of its leads for wry humor, such as in “Jose Chung’s From Outer Space” and “Bad Blood.” There is something miraculous about the fact that “Mulder and Scully Meet the Were-Monster” is so brilliant; 24 years after the pilot episode of “The X-Files” debuted on Fox, the magic is still, incredibly, present.

On some level, the smartphone gag is the reason that we, as a society, rebooted “The X-Files” for the six-episode event series returning this Sunday night. “The X-Files,” even though it stretched into the ‘00s, is a definitively, desperately ‘90s show. Brian Phillips, at Grantland, wrote a lovely elegy to the show on its 20th anniversary that outlines just this: The haunting sense of a fading status quo, a deep-seated suspicion of a government that couldn’t be trusted, and an anxiety about both a) that which is unexplainable and b) losing the unexplainable to the dread specter of Science. It’s most obvious in the fashion. In the early seasons, Agent Dana Scully (Gillian Anderson) wears broad-shouldered, often mannish suits and coats, in direct contrast to her blow-dried, bright red hair; Mulder wears wide ties and strangely baggy pants. It’s all in direct contrast to what we think of as hip today, and dates to an era where you had to look a certain way in order to be taken seriously—no skinny jeans and flannel worn to the office, here. But even in those necessary uniforms, Mulder and Scully are both drowning in material, floundering and out of place; the sense of loss and confusion that dogged both of them was what made the show so important for its legions of fans.

But there is one thing, in particular, that makes “The X-Files” more ‘90s than anything, and that is the lack of the Internet. Phillips observes the show “was probably the first great TV show to be galvanized by the Internet and the last great TV show to depict a world in which the Internet played no part.” Mulder and Scully wield brick-size cellphones and sit down to beige, boxy computers with green lettering to type their reports. The inexplicable hides in plain sight of Main Street, USA, because there aren’t surveillance cameras, YouTube videos, live-tweeters, or Redditors around to dismantle every mystery. In the rebooted event series, Mulder and Scully are better integrated into the World Wide Web, but it feels like an uncomfortable partnership. “Mulder and Scully Meet the Were-Creature” is smarter than the previous two episodes in the six-episode season, precisely for identifying how strange it is to marry the Internet—and particularly, the Internet that lives in our pockets, the smartphone—with these characters and this universe.

Our insatiable desire for more television has become the canvas for a bumper crop of ‘90s nostalgia. This weekend, it’s “The X-Files,” which debuted in 1993; late in February, it’s “Fuller House,” a spinoff sequel to “Full House,” which aired from 1987 to 1995. “Fresh off the Boat,” which debuted in 2015, takes place entirely in the ‘90s, full of references to Air Jordans, Mr. T and Shaquille O’Neal. Lifetime has made original TV movies on the lives of Whitney Houston and Aaliyah, whose careers both peaked in the ‘90s; the podcast “Serial” dissects with extreme detail the events of Jan. 13, 1999. And filming this fall is the revival of the granddaddy of ‘90s television—“Twin Peaks.”

It is the right time for ‘90s nostalgia. In 2011 and 2012, the thinking media did a lot of soul-searching about the resurgence of the ‘90s. Some hypothesized a 40-year cycle for being ready to look back at the past; others suggested 20, or 15; others dismissed the notion of a cycle of nostalgia entirely. But it is true that, regardless of whether we’re ready for nostalgia, the ‘90s have been back, waiting to be reminisced over, for the last several years. And despite a veneer of catering to Generation X, with “Twin Peaks” and the Kurt Cobain biopic “Montage of Heck,” this nostalgia track is for their freer-spending and more populous younger siblings, the millennials. Cartoon Network is bringing back 1998-2005’s “The Powerpuff Girls” after what the network termed “overwhelming demand”; Netflix is rebooting “The Magic School Bus,” which ran from 1994 to 1997, as part of its burgeoning kids’ programming catalog. The kids who grew up in the ‘90s are now in their 20s, with significant purchasing power of their own; they’re the ones who caught up on “The X-Files” and “Twin Peaks” on Netflix in the last 10 years. At least in significant part, the nostalgia is for them; millennials, the last generation to grow up without smartphones. Mulder’s confusion is hilarious, but not unfamiliar.

“Fuller House” is the reboot that really demonstrates the power of nostalgia. A lot of entertainment business decisions occur with little thought to quality; the greenlight for “Fuller House” appears to have been given without the concept of “quality” even entering the room. “Full House” is such a boilerplate, cheesy sitcom that it justified dismissing television as “the idiot box”; furthermore, there is no institution since the nuclear family of the ‘60s that has been so ruthlessly taken apart and exposed for being the opposite of sunny, vapid family comedy displayed on television. Fun dad Danny Tanner (Bob Saget) turned out to be filthy and pervy in shows like “Entourage” and films like “The Aristocrats.” Uncle Jesse (John Stamos) checked himself into rehab. Uncle Joey (Dave Coulier) was the subject of a particularly virulent Alanis Morrisette song that is now a karaoke standard; as great as it is, we are now all forced to know that she went down on him in a theater. DJ (Candace Cameron Bure) went from bulimia to born-again Christian; Stephanie (Jodie Sweetin) became a multi-substance drug addict at the age of 14; and famous twins that comprised Michelle became icy fashion moguls with eating disorders and, at least in one case, a tenuous connection to Heath Ledger’s overdose. The glossed-over cheery reality of “Full House” is the exact type of thing that prestige television rebelled against, with its dysfunctional families and broken antiheroes. So it is very perplexing to have it back.

And yet. Bustle is a site for millennial women, but one that has gone whole hog in its enthusiasm for “Full” and “Fuller House.” Michelle Lulic begins her piece “9 Reasons Why ‘Full House’ Is Absolutely Timeless” with a rhetorically unsound but heartfelt introduction:

If you grew up watching “Full House” then you know this one thing for sure: It will stay with you forever. There's a certain level of nostalgia that surrounds this classic family sitcom. Whether it's the connections you've made with the characters, the episodes you still remember to this day, or the catch phrases that you'll never really shake, “Full House” defines your adolescence and even the values you hold to this day — whether you realize it or not. In fact, when I think about the role “Full House” played in my childhood, I'm really not surprised at all over the fact that Netflix is rebooting “Full House” with the spin-off show “Fuller House.” It really, truly is a classic. That's really the one thing that makes “Full House” so memorable: It's a timeless show.

“Fuller House” brings the audience back to the exact same house, 15-odd years later. DJ—who is now DJ Tanner-Fuller, get it?— has fallen victim to the Tanner curse, ending up unexpectedly widowed with three young kids; sister Stephanie and best friend Kimmy (Andrea Barber) move in to help. Everyone else is around, of course, but these three women and the assorted kids—they are the show now. It’s determinedly uncomplicated; the most self-awareness the show demonstrates is when Kimmy’s daughter Ramona (Soni Nicole Bringas), who is half-Latina, theatrically complains at being forced to move in with the Fullers, “the whitest family in America.” ("The Fullers are like albino polar bears. Drinking milk. In a snowstorm. Watching 'Frozen'!").

“Fuller House,” weirdly, succeeds, as a kind of bland comedy with no aspirations; the kids are talented newcomers, and there’s just enough style left to the old rhythms to keep the catchphrasing and hug-it-out tantrums slightly entertaining. And one of its most reliable gags? Smartphones, naturally. Kimmy and DJ force Ramona and Jackson (Michael Campion) to say hello to each other at a party; both awkwardly say hello, and then immediately bend over their cellphones. Stephanie is changing baby Tommy (Dashiell and Fox Messitt, because this show is obsessed with twins) and somehow wraps her phone in his diaper; the requisite butt-dialing joke is then made. And when Kimmy can’t get Ramona to enter the Tanner-Fuller-Gibbler house, she grabs Ramona’s phone and chucks it into the living room.

What were the ‘90s? They were a world without our conveniences, and therefore, a world with a lot more mystery. Much of audiences’ fascination with the era is something like suppressed wonder at how anyone navigated adulthood without these devices and repositories of knowledge; even though, as we have discovered, an interfaced world is its own set of problems. How many mysteries of “The X-Files” could have been solved if someone on the scene had had a phone? How many secrets would the cast of “Full House” have been able to keep if we had Instagram? And how on earth will “Twin Peaks” square with 2016? Laura Palmer's (Sheryl Lee) last moments were caught on a camcorder, left on a tape for someone to stumble upon—not on a bricked iPhone traded in at the Verizon store. The secret club One Eyed Jacks could be listed on Google Maps, or scanned for, at least, with Google Earth. Even Lucy (Kimmy Robertson) probably wouldn’t be reading a massive book called, hilariously, “Tibet,” in what is the best sight-gag of the show. Books are heavy and hard to obtain. She’d probably just read the Wikipedia entry.