It's not just a Flint problem: Other U.S. cities are suffering from toxic water 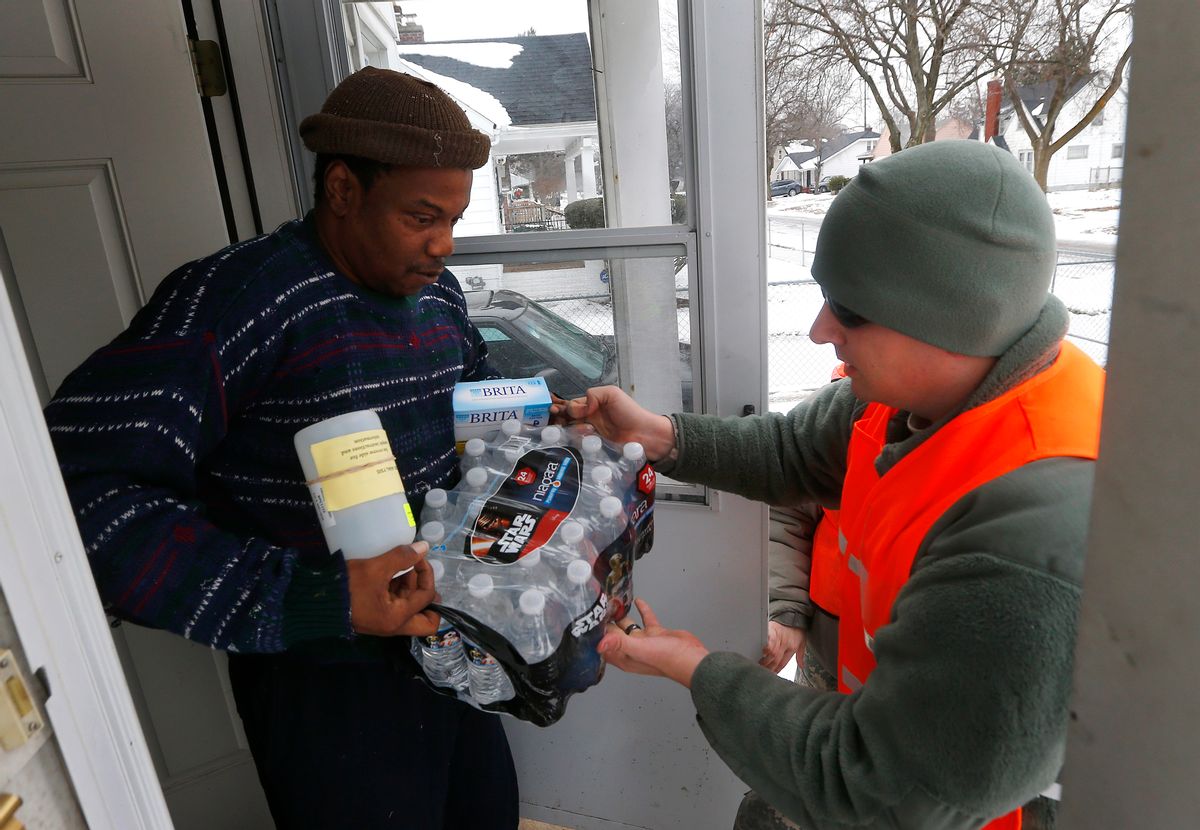 In the wake of the Flint, Michigan water crisis, residents in other U.S. cities are following suit by turning to social media to condemn government inaction on toxic drinking water and call for federal help.

A photo of what appears to be polluted water surfaced on Twitter over the weekend showing brown-colored running water coming from a tap in Lousiana. The caption reads “If you think the #flintwatercrisis was an isolated event, you’d better think again. This is water from St. Joseph, Louisisana.”

The post was retweeted by several activist accounts, including @Fintvictim and sounded the alarm about another U.S. city coping with unclean water.

Flint residents filed a class-action lawsuit against Michigan Gov. Rick Snyder in November for failing to add an anti-corrosive agent to the city's water, which consequently eroded pipes and let lead seep into the flow. When found in excessive levels in children, lead is a toxin that can lead to long-term neurological damage.

Chris Sellers, a professor of history at Stony Brook University, wrote on  The Conversation that “the physical conditions that have made it literally toxic for Flint residents are neither as exceptional nor as recent as much of the media coverage suggests."

Sellers said that the Flint case is not isolated, noting that an estimated six million miles of lead pipes across the country carry water to homes that are highly likely poisoning residents.

In a 2011  National Resources Defense Council study, 19 cities were found with pollution and deteriorating plumbing. These included: Albuquerque, Denver, Phoenix, San Diego and Fresno. It was also reported that while some cities did a good job of filing right-to-know reports, others published information that was incomplete, misleading, or buried deep in reports. Moreover, nearly all the cities in the study failed to report on the health effects of contaminants found in the water to their residents.

The Safe Drinking Water Act, enacted in 1986, required the Environmental Protection Agency to set standards for the concentration of lead in public pipes, with a push for “lead-free.” This stirred the country on a road towards replacing old water pipes with PVC, as an eco-friendly alternative. However, many poorer municipalities, like St. Joseph, instead turned to anti-corrosive agents as a cheaper and faster solution.

Last week it was reported that 60% of Flint’s population was African-American, prompting discussions about whether officials would have acted quicker if the city was comprised of white, wealthy residents. The New York Times questioned if the scandal was linked to environmental racism.

Likewise, the town of St. Joseph, located in northeastern Louisiana, is 77% African-American and 20% white, according to Surbubanstats.  Here again a large percentage of residents, 40%, live below the poverty line.

Initially residents had either become complacent or lost faith in the city officials representing them, however with the recent media attention on Flint, a new movement has been generated and a petition has been launched with over 2,400 signatures as of Monday, asking President Obama to declare a federal emergency in St. Joseph and send resources to repair the town's water infrastructure.

Residents from the small Louisiana town have seen the color of their water change from a pale yellow, to murky brown in recent days.  Rosine Bouobde, a resident from St. Joseph, told  knoe.com this has been going on for years.

Bouobde said that the toll of consistently buying bottled water is a burden on the residents of St. Joseph.

"You have to keep in mind that this is a community where a lot of people live in the poverty guideline. They actually have to allocate their revenue to purchase water that is truly not fair is it," she told knoe.com.

In his piece for The Conversation, Sellers wrote that the best solution for protecting the nation’s water would be to replace lead lines systematically and proactively, “not just one crisis-beset city at a time.