Michael Bloomberg is very bored: Why the billionaire ex-mayor wants you to think he might run for president

Barely 2 years removed from City Hall, the 1 percent's favorite politician is getting restless 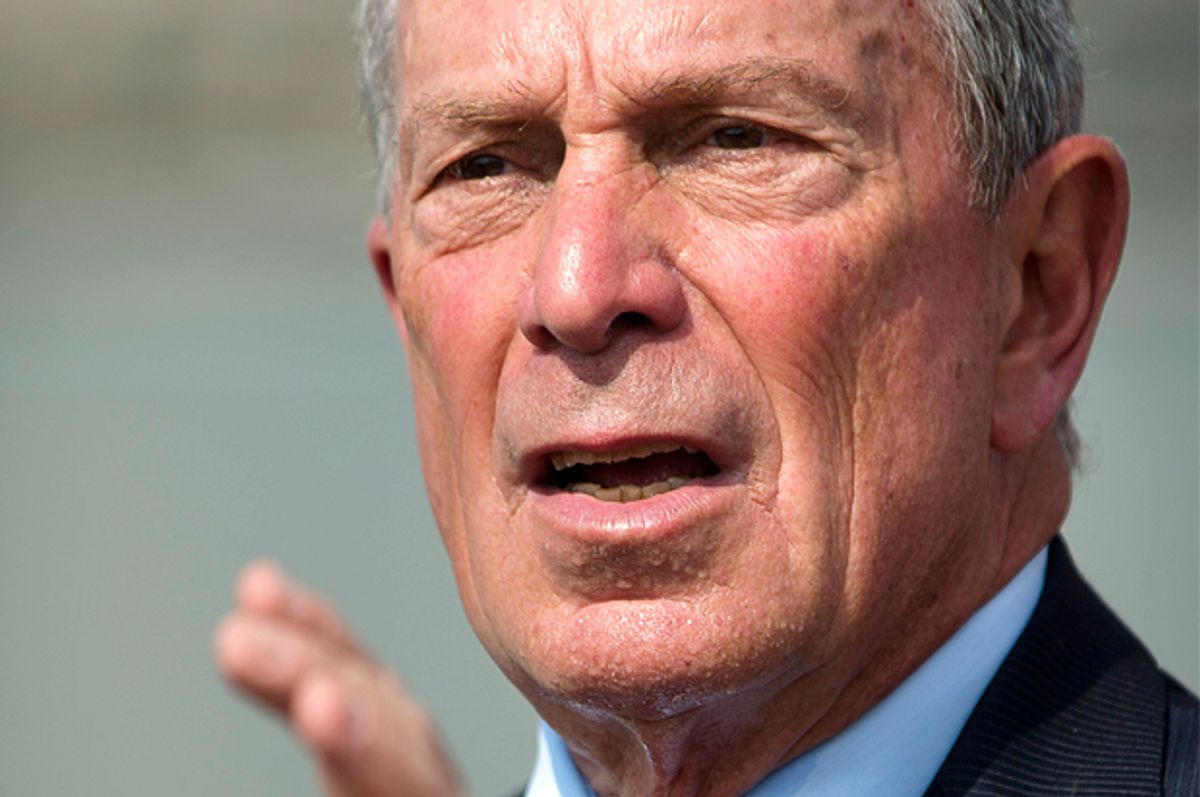 Over the weekend, as Americans in most of the Northeast and Mid-Atlantic states battened-down the hatches and prepared to reap the whirlwind of an unseasonably warm fall and early winter, multi-billionaire and former New York City Mayor Michael Bloomberg decided to remind everyone that he still exists.

He did so by leveling a threat he’s made many times before, one that always inspires a wave of media attention, but which never leads to anything more tangible or realistic. He let it be known that he was considering launching an independent campaign for president, one that he would pour as much as $1 billion of his own money into, and one that would seek to get his name on the ballot in all 50 states.

Why? Not because he thinks another President Clinton or President Bush would spell doom for the republic; he’d only do it, the Times reports, if the general election matchup featured Sen. Bernie Sanders vs. either Sen. Ted Cruz or Donald Trump. And not because the public is demanding Bloomberg’s signature mix of technocracy and paternalism; the Davos crowd has plenty of 2016 options already, thank you very much.

Despite his reputation for lacking pathos, I suspect that Michael Bloomberg’s motivations for launching this trial balloon are, fundamentally, sentimental. He’s not doing this because the public demands it. And he’s not doing it because he worries his policy preferences — which significantly overlap with those of the Democratic Party — will go ignored if he doesn’t. The “why” cannot be found outside himself.

No, his motivations, instead, are much more prosaic and uninspiring. Michael Bloomberg isn’t doing this because it’s necessary. He’s doing it because he is, quite simply, bored.

You might imagine that, after spending 12 years running the most influential and talked-about city in the world, most everything else would be a bit of a come-down. Some restlessness is to be expected. But as a great Der Spiegel piece on the man from last December revealed with painful clarity, Bloomberg’s boredom — and his need to run a grand project, one in which he can devote 100 percent of himself — is nearly all-consuming. It drives him, regardless of whether its consequences hurt or help.

Here’s how the Der Spiegel report describes the mindset that seemed to take control of Bloomberg as soon as it became obvious to him that, contrary to his expectations, he would not be offered a prestigious job after he relinquished his hold on City Hall:

Bloomberg had expected "someone would call him and offer him a job," says a former senior executive who knows the one-time mayor personally. But then nothing happened. Bloomberg, 73, experienced the same anticlimax as any top manager or politician who is constantly in the spotlight, seven days a week, 18 hours a day. Once that comes to an end, so too does the magic. What ensues is a vast sense of emptiness.

And so Michael Bloomberg did what he had until then categorically refused to do. After a year of upscale idleness, he returned to the helm of his financial and media empire. "When nothing else seemed to work, he asked for the keys back so he could get back into the driver's seat," says his former senior executive.

What followed, according to Der Spiegel, was “a restructuring like no other in the history of the $9 billion concern.” Once he had his hands firmly grasped around the wheel of the company he once built, the ex-mayor, Der Spiegel reports, “replaced nearly all of the top managers on the journalism side of the business and laid off more than 80 editors.” And that wasn’t all.

After a shakeup that the Der Spiegel piece suggests was a mixed blessing — at best — Bloomberg was still fidgeting. By the tail-end of 2015, Der Spiegel says, the disconnect between the scale of Bloomberg’s ambitions and his projects had become almost comic. “These days,” the Der Spiegel report says, “Bloomberg can often be seen pacing the halls of the company's Lexington Avenue headquarters.” He derives “immense pleasure” from “micromanaging everyday life at the company.”

From steering New York through the aftermath of 9/11 and then the 2008 financial crisis, Bloomberg, according to Der Spiegel, is reduced to this:

And then, of course, there are the paper towels in the bathrooms. One of the more popular anecdotes making the rounds these days is that, during a restroom visit, it took Bloomberg awhile to find the paper towel holders, which are hidden beneath the mirrors. Deeply irritated, he called the superintendent and demanded that small signs be posted in restrooms throughout the building.

More than any in-depth analysis of campaign polling or demographic projections, this, I believe, explains why Michael Bloomberg is now telling anyone who will listen that he’s considering a run for president.