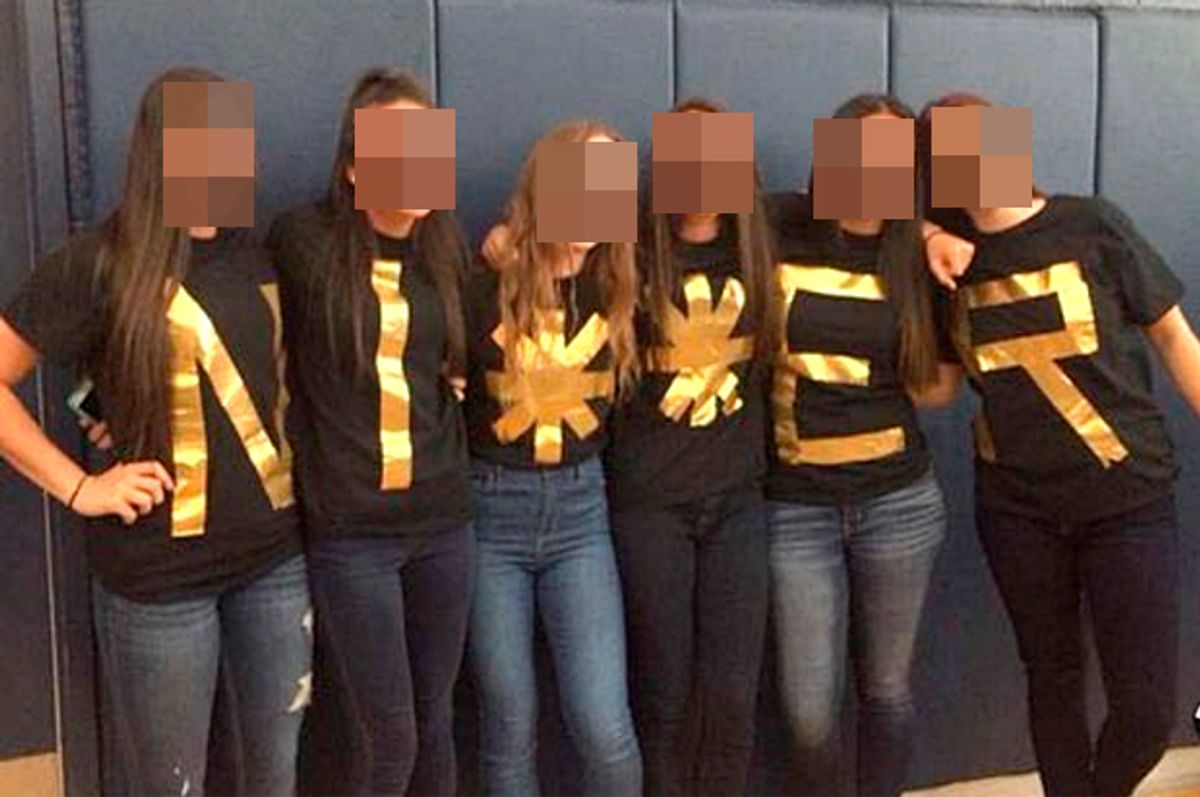 On Friday, a group of female Desert Vista High School seniors posed together for senior picture day, standing in line so their lettered black t-shirts spelled out "BEST * YOU'VE * EVER * SEEN * CLASS * OF * 2016." The Arizona Republic reports picture day "is a traditional event and common for students to wear shirts that spell out phrases." But the alphabet can get you in a heap of trouble, depending on how you arrange the letters. On Twitter, local 3TV sports anchor Tyler Baldwin soon posted the photo of the group, with the message, "Yes! This is the "best you've ever been class of 2016" because it's about to go downhill quickly #DesertVista." That it did. Because six girls decided it'd be hilarious to get together to spell out a racial slur, complete with enterprisingly deployed asterisks, and pose for a photograph.

The image appears to have originated on Snapchat, suggesting that the string of poor decision making also included the foolish assumption that because images on Snapchat are meant to disappear, there would be no evidence of the action. Instead, by Friday afternoon the photo was all over social media. Several students at the racially diverse school have since expressed "shock" over the incident. The school yearbook photographer, Tadj Jefferson, told the Republic Friday that "They rearranged themselves to make the word they spelled out. It wasn't planned, they just figured out that was one of the words that the big sentence made. And then I guess they thought it was funny…. It's offensive, especially to me because I am African American. It's not an okay thing to do."

Tempe Union High School District executive director of community relations Jill Hanks told the Arizona Republic Friday that the image "was taken off to the side somewhere, and I don’t know who took it or who posted it. We found out about it when everyone else did, when it popped up on social media," adding, "These are six students who made a really bad decision. They do not reflect the rest of the student body, the 3,100 other students that go here, staff that work here or anyone in our district." And she noted that an already planned sensitivity workshop for Monday was "pretty good timing." Hanks also sent out a statement that "The students involved will be disciplined in accordance with district policy and while we don't discuss specific discipline I can tell you that we will be addressing the obvious need for sensitivity training in this case." Desert Vista Principal Dr. Christine Barela echoed the sentiment in a letter to families, assuring "We share your outrage and disappointment over the actions of a handful of our students today" and that "we will discipline these students in accordance with district policy and our student handbook." The girls — along with the person who took the photo and the one who originally posted it — are rumored to have received a five-day suspension.

A civil rights protest has been planned for Monday afternoon, and a petition to have the girls expelled and the principal fired had garnered nearly 40,000 signatures by Monday morning. But while the girls did was repulsive, a school district can't be expected to amend its written policies based on a petition. The consequences for the students likely must follow a pre-set protocol. Meanwhile, in an essay on Jaded purportedly written from the "The Inside View of a Black Student," a young woman named Azelle Carter says that at Desert Vista, "White students are quick to recite rap lyrics, mock all black people including their black friends, and utilize the n-word (both versions of the term) on a daily basis. I figured it was only a matter of time before some their ignorant actions would come to light, but I never expected it to gain so much attention." And she says, "All I ask, to Desert Vista students and everyone else, is that you stop using the word."

It's doubtful either the pose or the photograph were well thought out acts. It may easily have begun with a group of kids wearing letters trying to figure out what provocative things they could spell out with them. And if they'd just stuck with "FART" and "ASS," this wouldn't be a big deal. These young women, however, didn't do that. They chose instead a word that's been used by white people for centuries to hurt and degrade other people. They did something, perhaps impulsively, but they did it based on an apparent lifetime of not learning why that behavior would be unacceptable. They did it with the casual arrogance and thoughtlessness that lies at the root of so much racist behavior. You can see it in the photo, in their carefree smiles and laughter. These are not children. These are high school seniors who are supposed to launched into the adult world in a few months. They have spent twelve years in school and yet seem not yet to have learned the basics of empathy and civility. And they have blithely believed, at least until Friday, they really were "the best you've ever seen."