Carly Fiorina and GOP frozen in denial over hoax video indictments: "Planned Parenthood has been trafficking in body parts"

Despite grand jury clearing PP and charging the creators instead, Republicans keep their heads in the sand 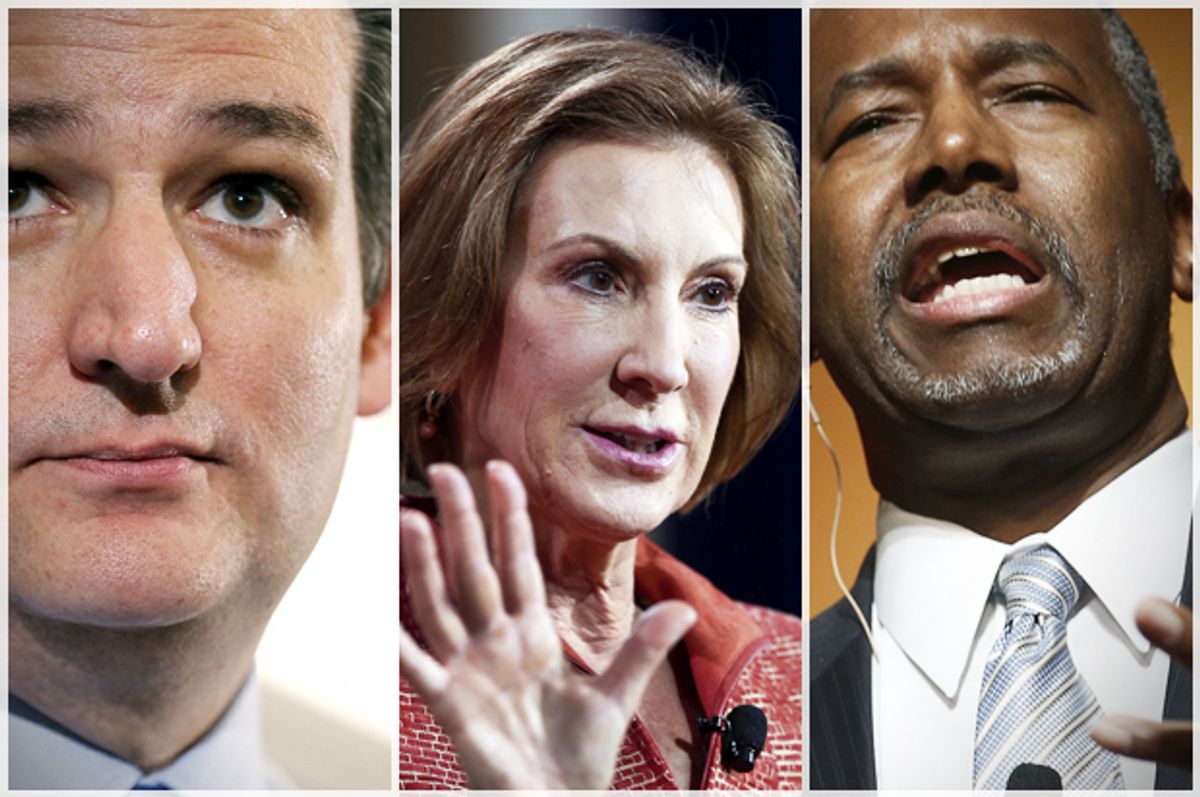 On Monday, a Texas grand jury investigating alleged misconduct by Planned Parenthood cleared the women's health organization of any wrongdoing and instead decided to charge the leaders of an anti-abortion group that had been harassing Planned Parenthood with a series of undercover videos. But despite that legal stake in the heart of the bogus crusade against the organization (and countless of other state investigations that have cleared Planned Parenthood), both Fox News and several of the Republican presidential candidates remain in denial, continuing to spout their false allegations of illegal fetal tissue trafficking and defending the indicted anti-abortion activists.

"I think it's pretty clear that we now know what goes on in Planned Parenthood clinics," Carly Fiorina said, reacting to the indictments on Monday. Fiorina, an outspoken promoter of deceptively edited videos by the Center for Medical Progress (CMP) -- whose two leaders the Houston jury incited on charges of “tampering with a governmental record" and “the purchase and sale of human organs" -- has staked her campaign on the lie she told a September debate audience: The videos showed "a fully formed fetus on the table its heart beating its legs kicking while someone says we have to keep it alive to harvest its brain.”

"I'm disturbed," Marco Rubio said of the indictments against CMP president David Daleiden. "We'll need to learn more, but I'm disturbed that while Planned Parenthood, who are the ones that were actually selling off these (body) parts were found having done nothing wrong, the people who tried to expose them are the ones that are now facing criminal charges."

Ben Carson said he was "saddened" by the decision. In a statement from his communication director to CNN, Carson indicated that he was "equally shocked that they instead decided to indict the individuals that exposed Planned Parenthood's heinous and illegal activities."

Carson's communication manager, clearly aware that Carson's evangelical-buoyed lead in Iowa has all but evaporated, vowed to continue the baseless crusade against the women's health organization. "As President, he will use the full weight of his office to not only cut off all federal funding for this organization, but also prosecute them for crimes against the unborn."

As for Fox News, perhaps some credit is due for even covering the news but most personalities did so standing firmly in a defensive crouch.

Tuesday morning on "Fox & Friends," Napolitano continued railing against the grand jury indictments, charging that "this type of indictment will chill, will deter journalists who want to have conversations with people." Co-host Steve Doocy then claimed that "journalists use the techniques every day," citing "60 Minutes" and "20/20."

Daledien and a partner were charged for tampering with a government issued identification card to falsely gain entry into a conference in order to covertly videotape discussions of fetal tissue donation with Planned Parenthood officials -- a felony charge that carries a punishment of not less than two, and not more than 20 years in prison, and a fine of up to $10,000. An online petition to drop all charges against Daledien has garnered nearly 27,000 signatures.

No word yet from Ted Cruz on the Texas grand jury's decision, although Texas Governor Greg Abbott reacted to the news by vowing to continue investigations into Planned Parenthood. “The State of Texas will continue to protect life, and I will continue to support legislation prohibiting the sale or transfer of fetal tissue,” Abbott declared.

More than denial, however, conservatives on Twitter reacted with outrage:

Watch Fox News flip out over the indictments, via Media Matters: