Elizabeth Warren could be a game changer: Most endorsements don't matter much, but hers would be a giant boost for Bernie 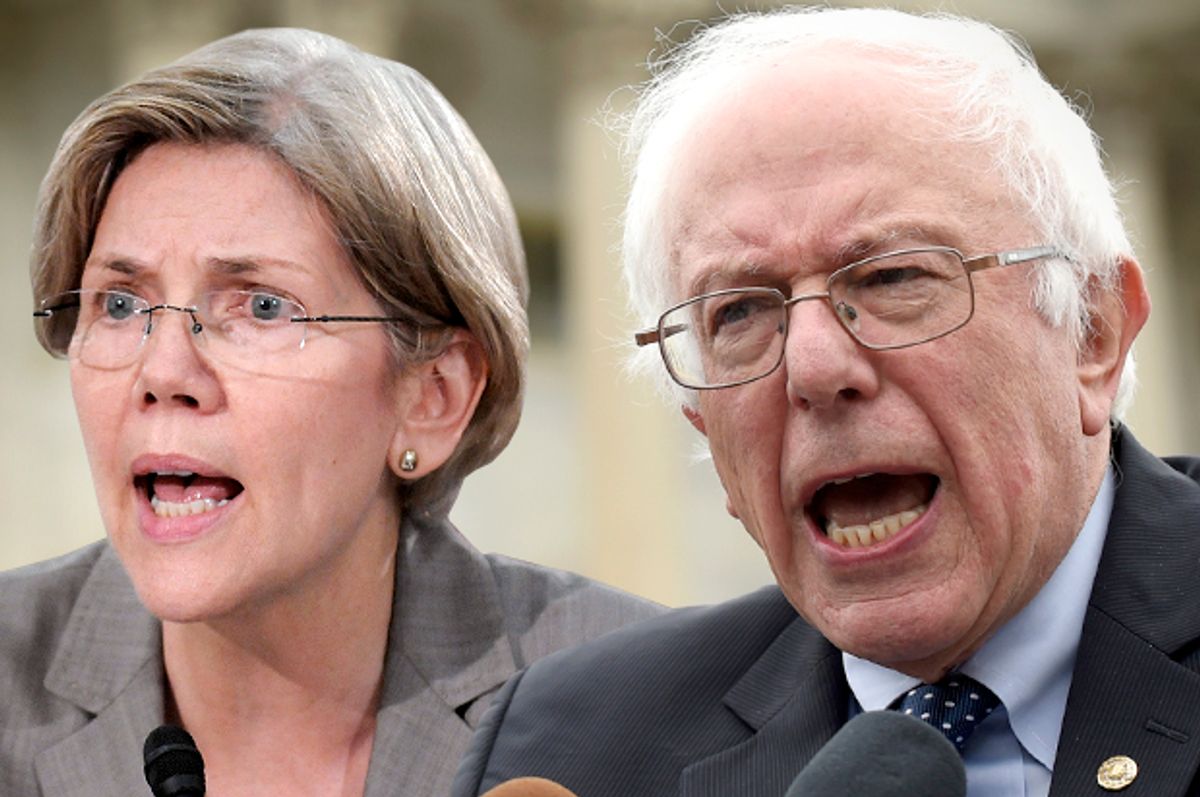 Sen. Elizabeth Warren has become something of a hero in progressive circles. A longtime consumer advocate, Warren has been a lion in the Senate, defending citizens against cronyism and corruption in Washington and on Wall Street. She’s as tireless an advocate as you’ll find in politics, and her reputation among liberals has only grown in recent years.

Observers have waited impatiently for her to weigh in on the presidential campaign. Will she endorse Clinton or Sanders? Generally speaking, political endorsements count for very little. Warren is an exception, though. She has real clout. If she puts her stamp on a candidate, it matters.

Although she’s been careful not to make an official endorsement, it seemed obvious enough that Warren would back Sanders. They’re perfectly aligned on every issue of consequence, and a Warren endorsement of Clinton would seem unavoidably expedient.

On Thursday, the sixth anniversary of the Supreme Court’s Citizens United decision, Warren gave a speech on the Senate floor. She spent most of her time outlining the steps Congress could take to purge dark money from our political process. But perhaps the most interesting takeaway is the not-so-subtle endorsement of Bernie Sanders.

While it’s not explicit, it’s impossible to miss the thematic overlap between Warren’s message and Sanders campaign. For instance, here are a few of the highlights from Warren’s speech:

“We have a problem: money. Six years ago today, the United States Supreme Court made the problem worse – a lot worse. Thanks to the Supreme Court, our system of elections is riddled with corruption. Money floods our political system. Money that lets a handful of billionaires shape who gets into Congress and may decide who sits in the White House.”

“Washington works great for a handful of wealthy individuals and powerful corporations that manipulate the system to benefit themselves…It works great for the lobbyists and the lawyers who slither around Washington, day in and day out, but for everyone else, Washington’s not working so well. And if we don’t change, this rigged political game will break our country.”

“We are headed into another presidential election and I speak out today because I’m genuinely alarmed for our democracy…It is time to fight back against a complete capture of our government by the rich and powerful.”

Notice how indistinguishable these remarks are from what you hear in Sanders’s stump speeches. Warren’s agenda is Sanders’s platform, and this speech left no doubt about that. Even the specific phrases Warren uses, like “rigged political game,” mirror Bernie’s language.

The most revealing part of the speech was the end. Warren came as close as she has – or perhaps will – come to officially endorsing Sanders. “A new presidential election is upon us,” Warren said, “The first votes will be cast in Iowa in just eleven days. Anyone who shrugs and claims that change is just too hard has crawled into bed with the billionaires who want to run the country like some private club.”

The subtext here is clear: do not listen to those who say we have to be prudent and accept that fundamental problems like financial corruption or campaign finance can’t be solved in the short or medium term. The knock on Sanders, fair or not, is that he’s too idealistic, too detached from the realities of Washington. Part of Clinton’s appeal to voters is that she’s pragmatic and experienced. She may not be as progressive as Sanders, but she can get more done in Washington.

That Warren decided to reject this line of thinking in such clear terms suggests she is inching closer to a Sanders endorsement. And even if she stays out of the endorsement business, she made quite a statement in this speech. At the very least, we can say with confidence that a Clinton endorsement isn't happening - that alone speaks volumes.